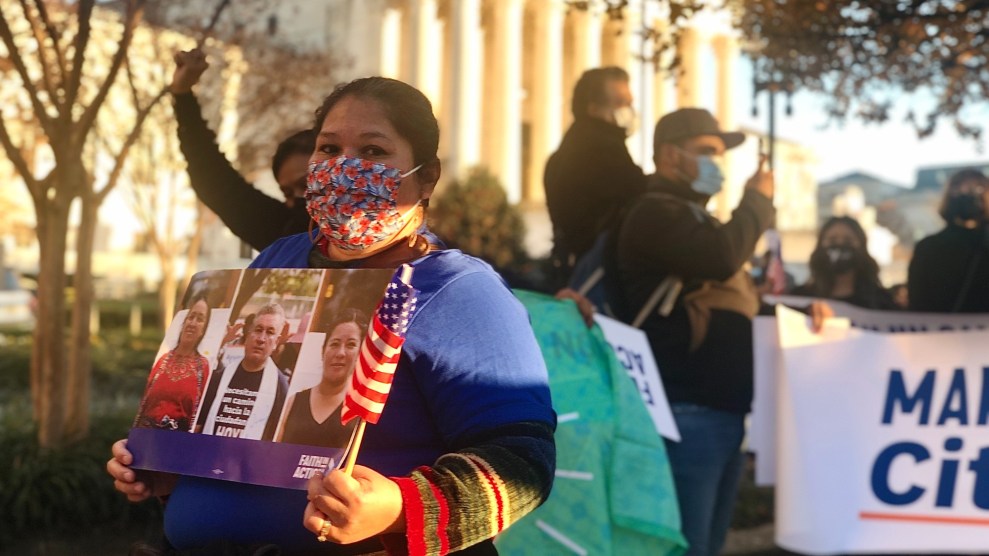 Immigrants march in Washington DC in December to call for a path to citizenship.Isabela Dias

In another blow to Democrats’ aspirations to include immigration provisions in Biden’s Build Back Better bill, the Senate parliamentarian opposed a plan to grant protection from deportation and work authorization to millions of undocumented immigrants in the United States. It’s yet another frustrating example of how the filibuster has combined with Senate bureaucracy to stop immigration reform.

In order to bypass the filibuster, Democrats have attempted to include immigration in the budget—which can pass through reconciliation, requiring only a simple majority of 51 votes. But to do so provisions have to adhere to the Byrd rule, which requires each piece has an impact on federal spending and revenue that isn’t “merely incidental.” It falls to the Senate parliamentarian, Elizabeth MacDonough, to determine if provisions meet that measure.

On Thursday, MacDonough, an unelected official who plays an advisory role regarding compliance with the chamber’s legislative rules, issued a short guidance arguing the proposal would amount to “substantial policy changes with lasting effects” and outweigh the budgetary impact.

This is the third time MacDonough, a former immigration prosecutor, has rejected proposals to include immigration measures in the $2 trillion social and climate spending bill. The initial plan would have created a path to citizenship for Dreamers who came to the country as children, essential workers, Temporary Protected Status holders, and farm workers (in line with Biden’s early regularization legislative proposal). After it was deemed a no-go, a second alternative Democrats presented to MacDonough, also rejected, entailed updating a provision in immigration law called “registry” that allows certain long-term undocumented immigrants to become legal permanent residents. Under the most recent watered-down version known as Plan C, about 6.5 million immigrants living in the United States since before 2011 would receive parole and with it a temporary relief from deportation for a period of five years with the possibility of renewing it once. They would also be eligible for work permits and travel authorization. That one met its demise yesterday.

“We strongly disagree with the Senate parliamentarian’s interpretation of our immigration proposal, and we will pursue every means to achieve a path to citizenship in the Build Back Better Act,” Senate Majority Leader Chuck Schumer and other Democratic senators wrote in a joint statement. “Throughout the entire reconciliation process, we have worked to ensure that immigration reform was not treated as an afterthought.“

The Parliamentarian’s opinion is incorrect on immigration. There’s a clear budgetary impact and years of precedent for immigration policy changes through reconciliation. We must pursue all options to deliver a path to citizenship, including for Dreamers and essential workers.

The temporary protection afforded by a parole program is a far cry from the decades-long promise of robust immigration reform, which last happened in 1986 under President Ronald Reagan. “For decades, immigrants have sought relief from the precarity of jumping from one temporary status to another in the only country they call home,” 90 House Democrats wrote in a November letter calling on the Senate to include a pathway to citizenship in their version of the reconciliation bill.

“With the pandemic, a lot of people didn’t get to have Christmas or birthdays together. That is the life of immigrants day in and day out.”

Karina Ruiz is very familiar with that sense of precarity in her mixed-status family. The 37-year-old mother of three US citizen children and grandmother of three came to Phoenix, Arizona from Mexico in 1999 at the age of 15. She was granted status under the Obama-era Deferred Action for Childhood Arrivals (DACA) program in 2013 and has had to renew it four times since. In 2017, Ruiz was able to visit Mexico for the first time in 18 years through advance parole, but with DACA under constant threat, Ruiz and other Dreamers are left in limbo. When her father passed away from COVID in November 2020, Ruiz was allowed to travel for his funeral in Oaxaca, but her undocumented mother couldn’t come. “I was so blessed to be able to be with him in those moments and say goodbye,” she told me. “With the pandemic, a lot of people didn’t get to have Christmas or birthdays together. That is the life of immigrants day in and day out.”

Ruiz’s father, a joyful but tough man who loved Vicente Fernández’s music and couldn’t drive but rode a tricycle around, died at the age of 74 without seeing his other children in Mexico in more than two decades. “[My mother] and my sister FaceTime every single day because both of them are afraid that something could happen because of the pandemic,” Ruiz says. “I can see the fear in them that they won’t be able to hug one last time.”

Ruiz knows parole is not the perfect solution, just like DACA wasn’t. But it’s better than nothing. “We deserve citizenship and we will continue fighting for it,” she said during a march for immigrant rights in Washington DC in mid-December. “But if right now what is possible and feasible for Congress is to at least protect immigrants, a work permit, and the ability to return to see your loved ones, that would change our lives significantly.”

Democrats can still decide to ignore the parliamentarian’s opinion, something advocates and progressives have long been calling for but seems unlikely to happen. Sen. Joe Manchin (D-W.Va.) has already stated his opposition to sidestepping the Senate parliamentarian. In the past, Republicans have gone so far as dismissing a parliamentarian over frustration with his rulings.

On Friday, White House Press Secretary Jen Psaki described the decision by the parliamentarian as disappointing. “Ultimately, it’s time for Congress to stop kicking the can down the road and finally provide certainty and stability to these groups and make other badly needed reforms to our outdated immigration system,” she said.