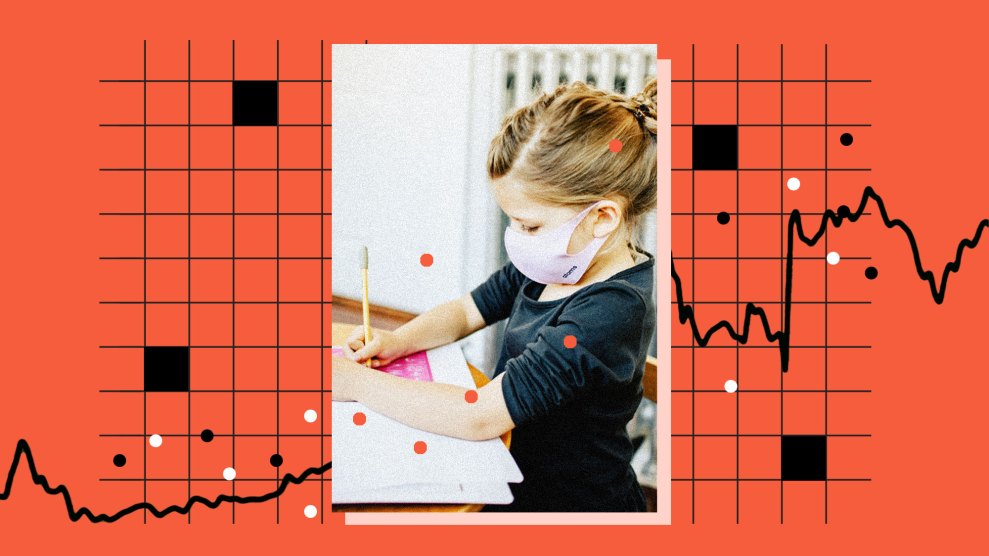 After two years of pandemic living, I am utterly exhausted by the idea of wading through another Twitter war about masks in schools. So it was with some trepidation that I began reading through threads about the Urgency of Normal toolkit, a set of slides prepared by a group of nine prominent physicians who believe schools must move to phase out mask mandates and virtual learning by February 15. The toolkit argues that masks are harmful to the mental health of students, and that they’re unnecessary because the Omicron variant is mild in children, comparable to the flu.

The Urgency of Normal’s ultimate goal—to get back to school life as it was before the pandemic—is relatively uncontroversial. Most parents can’t wait for the day when the virus becomes manageable enough that students no longer have to wear masks or slog through zoom classes. And there is some convincing evidence suggesting, for the youngest learners, that masks aren’t especially effective at preventing the spread of Covid. Very few parents actively want public health measures to continue beyond the time when they’re absolutely necessary.

The pedigree of the physicians in the group is impressive, too. Several hold positions at the University of California-San Francisco School of Medicine. Others are affiliated with prestigious children’s hospitals. Despite these sterling credentials, when several scientists dug into the toolkit’s sourcing shortly after it launched, they found major inconsistencies and errors. Most glaringly, the doctors claimed that child suicides had increased dramatically during the pandemic—which was false. (They have since edited that slide to reflect more accurate data.) Among the other misrepresentations and poorly supported arguments, the group made an unfair comparison of Covid and flu death rates in kids, misinterpreted the conclusions of a meta-analysis of the prevalence of long Covid in children, and blamed school closures alone (ignoring the effects of the pandemic itself) on kids’ mental health problems.

I won’t get into the technicalities. There are several excellent threads that explain them—like this one by University of British Columbia child and adolescent psychiatrist Tyler Black and this one by Emily Smith, an epidemiologist at George Washington University’s Milken Institute School of Public Health. Instead, I’d like to focus on how the flawed Urgency of Normal toolkit—however noble its intentions—is likely to create a host of new problems that are arguably even more intractable and divisive than masks at schools.

First, let’s talk about the toolkit format. The idea of prepared talking points isn’t new, of course, but it seems to be having a moment. Consider the remarkable success of the conservative special interest groups that, for the past year, have been making slide decks to help parents take on their local school boards. Across the country, during open comment periods, meeting attendees have used the templates to voice concerns, mostly about pandemic health measures and discussions of race in the classroom. The groups’ talking points have been effective not only in sowing chaos at school board meetings, but in radicalizing parents.

“This has the veneer of certainty and near perfect professionalism” that could “lead you to incorrectly make your own risk benefit analysis.”

Such efforts also have a way of taking on lives of their own: Once they’re unleashed, the original intentions of their creators don’t really matter. This Frankenstein effect is a terrifying possibility for the Urgency of Normal toolkit, which could be marshaled by groups with fringe anti-scientific views. It’s already happening. Just yesterday, a holistic pediatrician with a track record of downplaying the benefits of vaccinating children against Covid shared the toolkit with more than 55,000 followers. Smith, the George Washington University epidemiologist, said she learned of the toolkit from school board members who’d had it sent to them by riled-up parents. “This has the veneer of certainty and near perfect professionalism and correctness,” Smith told me, adding that she’s concerned the toolkit could “lead you to incorrectly make your own risk benefit analysis.”

But there is a more subtle, and depressing, potential outcome, a result whose ramifications could extend beyond the debates over mask mandates and, indeed, the pandemic itself. When a group of renowned physicians misrepresents science to further a cause, the public trust in science is further degraded—especially in the eyes of people who, because of misinformation they’ve encountered previously on social media, have grown skeptical of settled science. “The same mouth that says ‘you must take your vaccines’ is saying kids must go back to school,” notes Black, the UBC psychiatrist. “And if the evidence for kids must go back to school is that poor, what does it mean about your statements about kids taking vaccines?”

When scientists champion flawed data, they endanger other scientists. We’re already seeing an erosion of confidence in the scientific community thanks to powerful anti-science advocates, including Republican lawmakers and right-wing media personalities. Researchers who once worked in relative obscurity face death threats. Peter Hotez, a vaccine scientist with Baylor College of Medicine who has written and spoken extensively about what he calls anti-science aggressors, led an effort to develop the first low-cost, patent-free Covid vaccine. He nevertheless found himself “under unrelenting attacks from far right extremists,” he tweeted last year.

Black told me he’s been in touch with some Urgency of Normal members, and that the team has expressed interest in incorporating his feedback into toolkit revisions. Urgency of Normal member Scott Balsitis, an immunologist with Gilead Sciences in California, told me the group already has made some changes based on Black’s recommendations. “Our goal is to get accurate data into people’s hands, so we welcome constructive, data-driven input,” he said.

Yet even if the data is corrected, the toolkit authors’ failure to properly vet the material in advance leaves an opening for bad actors to attribute disinformation to respected experts. The Urgency of Normal authors wanted schools to get back to pre-Covid life by February 15—but it could take years to fix the damage they’ve done.