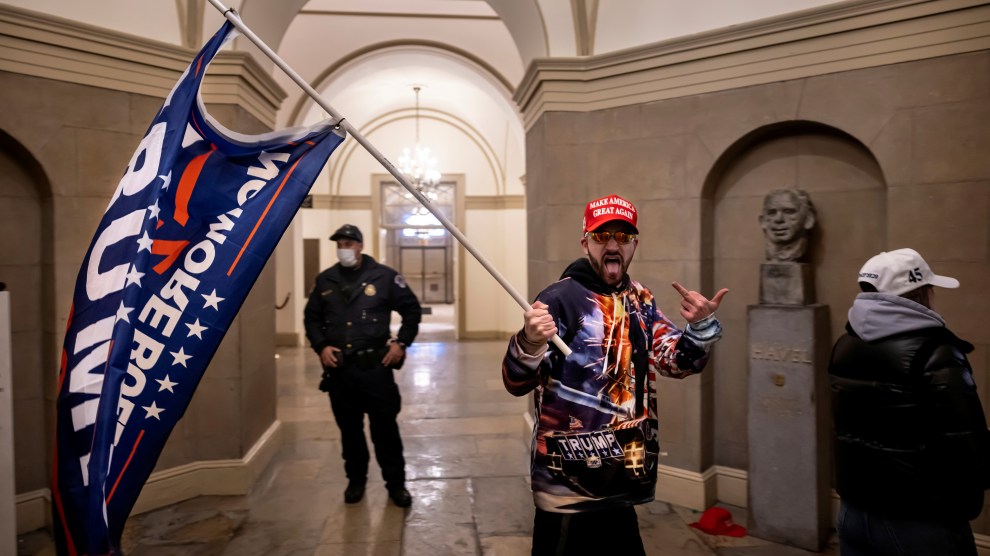 Trump supporters who breeched security and entered the US Capitol on January 6, 2021Brent Stirton/Getty

One year after the harrowing assault on the US Capitol by thousands of Donald Trump supporters, the former president canceled a press conference in which he had planned to hold forth about the events of that day. (Instead, he’ll do so at a rally scheduled for mid-January in Arizona, he announced in a statement.) He backed away from the now infamous date as a bipartisan House committee continues probing the role of Trump and his inner circle in the unprecedented attack on the bedrock American system of peacefully transferring presidential power. Trump also made clear, however, that he will not cease inciting the insurrectionist movement—whose animating lie, that the 2020 election was “stolen” through fraud, continues to stir threats of far-right extremist violence.

According to a report from the Department of Homeland Security shared on January 3 with various US law enforcement and intelligence agencies, “threat actors will try to exploit” the January 6 anniversary “to promote or possibly commit violence.” The DHS report cites extremist material circulating online, including flyers calling for renewed attacks on the seat of American government: “This was just the beginning,” one says, featuring an image of rioters inside the Capitol Building a year ago, doctored with blood splatter. “Reunion on Capitol Hill January 6 2022,” it further reads.

Additional postings, according to Yahoo News, carry messages such as “TAKE OUR COUNTRY BACK,” while others from suspected extremists include instructions on how to conduct sniper attacks and build homemade explosives. (The latter is also a sobering reminder of the scope of the FBI investigation into the insurrection: It remains unclear whether authorities will be able to find and apprehend the source of bombs planted at the national headquarters of both the Republican and Democratic parties just ahead of the mayhem a year ago.)

Homeland Security Secretary Alejandro Mayorkas told reporters on Tuesday that DHS is “not aware of any specific credible threats at this point related to Jan. 6, 2022.” But both the DHS report and Mayorkas’ further comments affirmed that lies and conspiracy theories about election fraud continue to speak loudly to violent far-right extremists and fuel the danger. The assault on Congress a year ago “was borne of a false narrative, of a false claim that the 2020 presidential election was stolen,” Mayorkas remarked on Tuesday, adding, “We are seeing, indeed, a greater connectivity between misinformation and false narratives propagated on social media and the threat landscape.”

As I’ve documented since last fall, Trump has been methodically carrying out a messaging campaign that aims to cover up and rewrite the horror of January 6, 2021. One of his core tactics (used throughout his presidency) has been to seize the language of his critics and invert reality for his supporters, in this case seeking to convince them that the actual insurrection was the November 2020 presidential election itself. “I reverse it,” he said in a recent TV interview, further declaring that the assault on Congress was simply “a protest” in response to the supposed electoral theft. Trump has also spearheaded a campaign of lies that the assault on the Capitol was unarmed—despite the fact that his supporters brought many guns and other dangerous weapons to DC that day.

In a statement from Trump posted Tuesday on the “Save America” fundraising site hosted at donaldjtrump.com, the ex-president again reiterated his up-is-down message: “This is the Democrats’ Great Cover-Up Committee,” he said of the bipartisan House probe. “[W]hy is the primary reason for the people coming to Washington D.C., which is the fraud of the 2020 Presidential Election, not the primary topic of the Unselect Committee’s investigation? This was, indeed, the Crime of the Century.”

As historian and authoritarianism expert Ruth Ben-Ghiat noted on Tuesday, citing the Washington Post’s exhaustive fact-checking database, “Trump’s Big Lie, getting tens of millions of people to believe that he actually won the 2020 election, was made possible by the 30,000 lies and misleading claims that preceded it.”

The damage and danger exacerbated by Trump’s propaganda grip on the GOP remain stark: Polls consistently indicate that a strong majority of Republican voters do not believe Joe Biden is legitimately the US president. Only about 4 in 10 Republicans believe that serious violence took place a year ago at the Capitol, where mobs of Trump supporters attacked hundreds of police officers, ransacked the halls of Congress—and several people died. Most disturbing of all, surveys throughout last year suggested that a third or more of Republicans agreed that the use of political violence may be necessary for “saving” the country.

As the one-year mark of the historic insurrection arrives, Congress itself operates against a grim backdrop. According to US Capitol Police Chief Thomas Manger, menace against US lawmakers is at an all-time high. Recorded threats against members of Congress have more than doubled since 2017, rising to more than 9,600 over the past year.