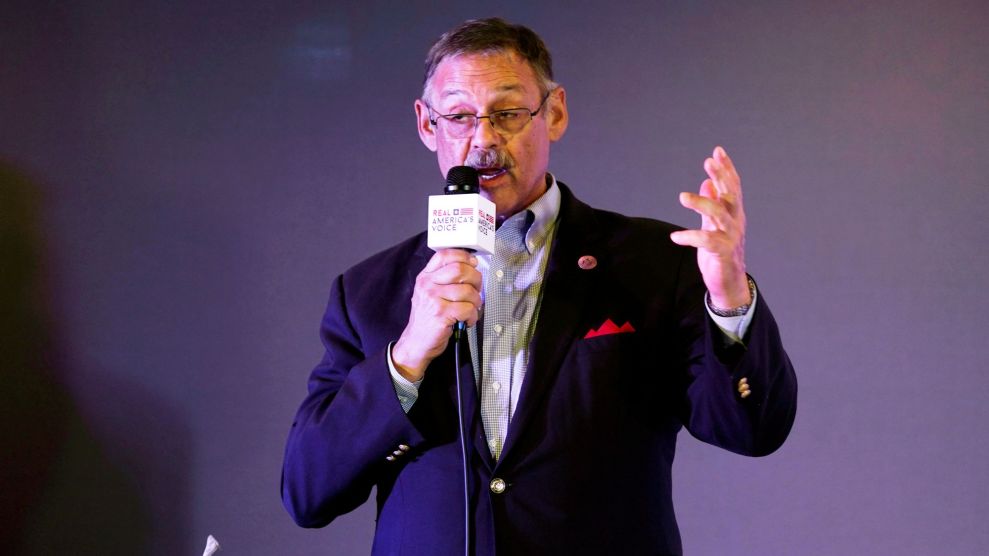 Rep. Mark Finchem, of Arizona, at an October 2021 rallySteve Helber/AP

As part of his I-ain’t-going-away campaign, Donald Trump will hold a rally in Florence, Arizona, this Saturday. He describes the event as “a continuation” of his “unprecedented effort to advance the MAGA agenda by energizing voters and highlighting America First candidates and causes.” But the rally will do something else: provide a boost to the extremist and absurdist QAnon movement—which claims Trump is covertly battling a global cabal of pedophilic and cannibalistic elites that include top Democrats and liberal billionaires—by featuring a QAnon supporter whom Trump has invited to be a “special guest speaker.”

The roster of other acts scheduled to share the stage with Trump includes various Arizona Republicans who have peddled Trump’s Big Lie about the 2020 election, such as Reps. Paul Gosar, Andy Biggs, and Debbie Lesko. Also on the line-up will be My Pillow guy Mike Lindell; state GOP chair Kelli Ward, who has supported Trump’s bogus claims of election fraud and who asserted the January 6 rioters were part of a false flag operation to undermine Trump; and Kari Lake, a candidate governor who CNN has branded a “serial promoter of election lies.” (Lake, who was recently a local Fox anchor, called for locking up the secretary of state who certified Joe Biden’s win in Arizona and endorsed Lindell’s assorted crackpot theories about the election.)

The QAnon-friendly speaker on this list is state Rep. Mark Finchem, who is running for secretary of state with Trump’s endorsement. Finchem’s links to the QAnon movement are no secret. As I previously noted:

In June, CNN reported, “Finchem has repeated conspiracy theories on fringe conservative media and at least one high-profile podcast known for being supportive of QAnon. ‘We’ve got a serious problem in this nation,’ he said in a separate interview on Victory Media. ‘There’s a lot of people involved in a pedophile network in the distribution of children…And, unfortunately, there’s a whole lot of elected officials that are involved in that.’”

Finchem appeared on that QAnon-friendly podcast, which aired on May 9, with host Zak Paine, a well-known QAnon advocate and conspiracy theory amplifier. According to The New York Times, Paine’s channel on Twitch, a live streaming video site owned by Amazon, “has more than 14,000 followers and is rife with conspiracy theories about vaccines and cancer. In one stream, [Paine] and a guest encouraged viewers to drink a bleach solution that claims to cure cancer, which the Food and Drug Administration has said is dangerous. Last week [in April], he referred to a QAnon belief that people are killing children to ‘harvest’ a chemical compound from them, then talked about a ‘criminal cabal’ controlling the government, saying people do not understand ‘what plane of existence they come from.’” During the May 9 show, Finchem claimed a slow-motion coup against Trump was underway.

A few weeks earlier in April, the Arizona Mirror reported, “Finchem himself has dabbled in QAnon, sharing a widely debunked photo on Gab that actor Paul Walker was killed by the Clintons because he was ‘coming forward’ with information about alleged crimes against the Clinton Foundation in Haiti. The actor died in 2013 when the sports car he was a passenger in crashed into a lamp post and a gas pipe, which burst into flames.”

Finchem was in Washington on January 6 for the so-called “Stop the Steal” rally that led to the insurrectionist raid on Congress. According to the Arizona Republic, he was “outside, mingling with crowds amassed on the Capitol steps, photos, texts and social media accounts show.” That day, he issued a tweet that seemed to justify the assault, describing the riot as “what happens when the People feel they have been ignored, and Congress refuses to acknowledge rampant fraud.”

Finchem has repeatedly declined to comment to reporters about his QAnonish beliefs, but his QAnon connection has become something of an issue in his race for secretary of state, with media reports referring to his past statements and posts. In October he was a “special guest” at a QAnon conference in Las Vegas. The speakers for this event were a veritable parade of QAnon promoters and other fringe theorists. That included Ron and Jim Watkins, who are widely suspected of cooking up the QAnon scam (an allegation they deny). Also on the speakers list: George Papadopoulos, the Russiagate figure who assails the “deep state”; Stella Immanuel, the infamous sex-with-demons doctor; and retired Lt. General Thomas McInerney, a far-out conspiracist who has claimed the Democrats plotted with the Chinese government to create Covid-19 and then committed voter fraud to oust Trump. At one point, audience members were led in a chant, “Sheep no more!”

At the conference, Finchem appeared on a panel with three other Arizona Republican officials to discuss the GOP-forced review of the state’s 2020 election returns, a process the Arizona Mirror described as “marred by controversy and conducted by conspiracy theorists who had no background in elections or knowledge of Arizona election law.” It eventually found no evidence of fraud and concluded Biden won Arizona.

On a second panel, Finchem discussed various election conspiracy theories with other QAnon-linked candidates, and he hailed a Colorado elections official who was involved in a QAnon-connected investigation of supposed election fraud. He also compared “cancel culture” to the Holocaust.

When Trump endorsed Finchem in Arizona’s GOP primary for secretary of state, he praised Finchem: “He is a patriot who has fought for our Country right from his earliest moments in government. Mark was willing to say what few others had the courage to say.”

At a town hall event during the 2020 campaign, Trump refused to disavow the QAnon conspiracy theory. “I don’t know anything about QAnon,” he said at first. Then he added, “Let me just tell you what I do hear about it is they are very strongly against pedophilia and I agree with that.” That could well have been read by QAnoners as a message of encouragement. On Saturday, Trump will go further by sharing the stage—and whatever prestige he has as a former president and possible future presidential nominee—with a QAnoner and bestow a degree of legitimacy upon this loony far-right paranoia. How will those believers in a satanic global conspiracy view this? It has to be a sign, right?