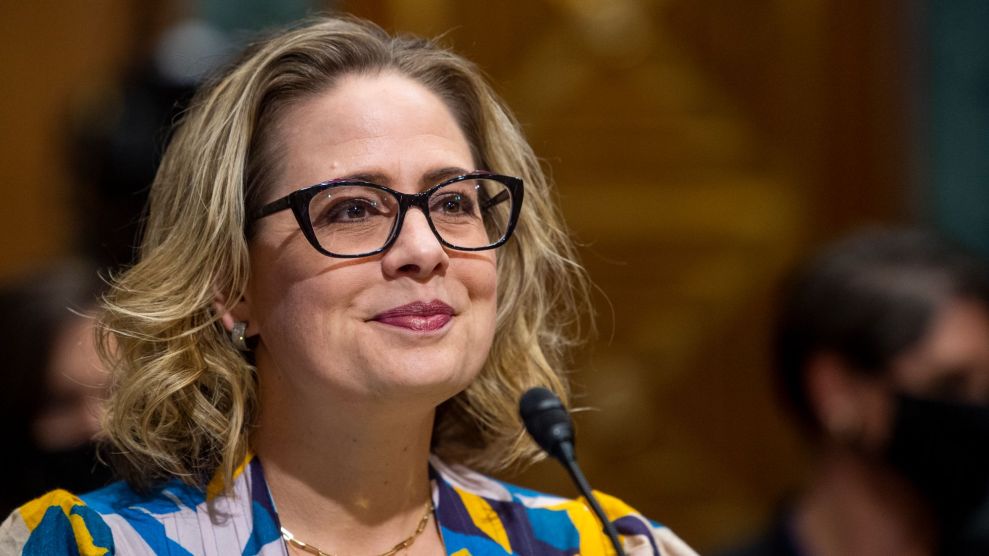 Last week, Kyrsten Sinema (D-Ariz.) took the Senate floor and announced that she would never, under any circumstances, vote to curtail the filibuster. It dealt a coup de grace to what could be the Democrats’ last (and best) chance at federal voting rights reform, enraged Arizona organizers who worked to get her elected in 2018, and fell squarely in line with her self-appointed role as the avatar of Senate obstructionism.

Five days later, the backlash from progressives and party activists started to arrive. The powerful pro-choice Democratic group EMILY’s List, one of Sinema’s top financial backers, announced on Tuesday that it would no longer support the senator in future elections if she continues to block the voting legislation.

“Right now, Sen. Sinema’s decision to reject the voices of allies, partners and constituents who believe the importance of voting rights outweighs that of an arcane process means she will find herself standing alone in the next election,” wrote the organization’s president, Laphonza Butler, in a public statement.

Today, we’re changing our endorsement criteria to reflect our commitment to the freedom to vote. Going forward, we won’t endorse any U.S. senator who doesn’t support changing the Senate rules to pass voting rights legislation. Our democracy is on the line. #DeliverForVotingRights

Both EMILY’s List and NARAL justified the change to their endorsement criteria with similar logic, claiming that voting rights and abortion rights are “inextricably linked.”

Sinema’s stance on voting rights has also energized a longstanding debate among liberals about whether to mount a primary challenge against her in 2024. The Primary Sinema PAC, which aims to throw the senator out of office, told Politico that donations soared the day of her Senate speech rejecting filibuster reform. Run Ruben Run, a group dedicated to drafting Arizona Congressman Ruben Gallego for a primary challenge, also saw its daily donations quadruple. In addition, Sen. Bernie Sanders (I-Vermont), one of the most popular progressive politicians in the nation, told the Associated Press that he’d consider supporting a potential primary challenger against her.

It’s become apparent that Sinema, once a radical Green Party activist and Ralph Nader devotee, has alienated vast swaths of the liberal base. Even seasoned Arizona politics watchers have expressed utter confusion about her 2024 reelection game plan. Is there a path for a pro-business centrist who’s lost the backing of Democratic activists and whose brand centers around obstructing some of the most popular elements of the party’s platform? Opinion polls seem to indicate no. In October, the progressive polling group Data for Progress reported that Sinema’s net approval rating among likely primary voters stands at a breathtaking negative-45 percentage points. All the terrible publicity she’s gotten over the last two months only stands to exacerbate her poor stature among the party faithful.

Who knows how things will shape up over the next two years, but at the moment, Sinema’s commitment to obstructionism seems to run contrary not only to democratic principles but also simple self-preservation.