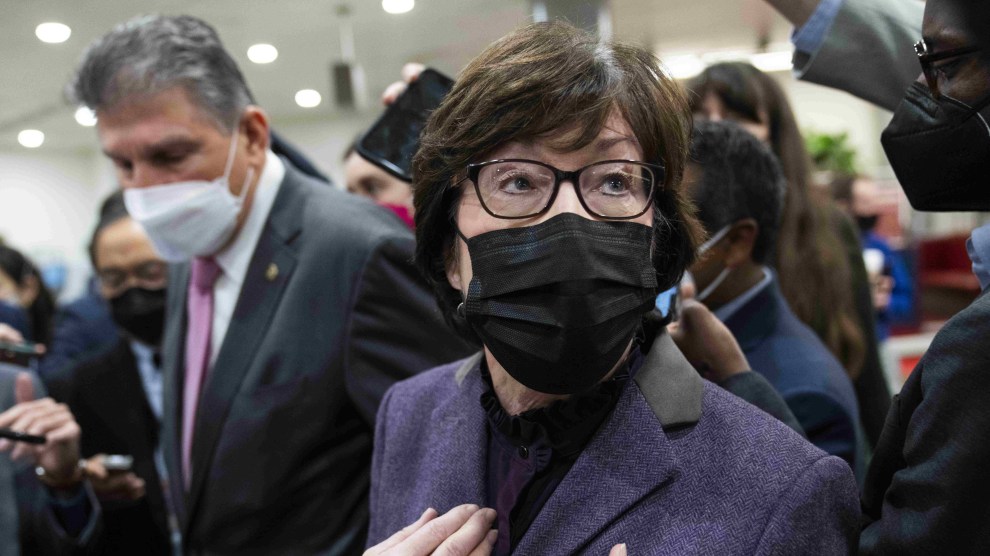 Susan Collins, the moderate Republican senator from Maine, has occasionally broken ranks with her party to stand up for what she thought was right. She voted to convict former President Donald Trump at his second impeachment trial, and she voted not to confirm Trump’s hastily selected Supreme Court nominee, Amy Coney Barrett, following Ruth Bader Ginsburg’s death just weeks before the 2020 election.

But now Collins has returned in fine form to the role for which so many Democrats loathe her. In her typical noncommittal fashion, she’s refusing to say where she stands on two of Democrats’ biggest current priorities: confirming a Biden nominee for the Supreme Court, and preventing Trump from ever holding office again.

In an appearance on ABC’s This Week with George Stephanopoulos on Sunday, Collins refused to say that she wouldn’t support a potential Trump run in 2024. Even with Trump actively in the public eye again—including his vowing this weekend to pardon the January 6 insurrectionists if he were to be elected president again—Collins said she doesn’t see a scenario in which the former president (who won nearly 47 percent of the popular vote in 2020) could win the party’s nomination. By downplaying Trump’s chances, her comments provided cover for her not saying explicitly that she wouldn’t back him. “Certainly, it’s not likely given the many other qualified candidates that we have that have expressed interest in running,” she said, regarding Trump’s chances of getting the nomination. In fact, recent polling suggests that Republicans overwhelmingly support Trump over other potential candidates, including Florida Governor Ron DeSantis.

Susan Collins won’t shut the door on supporting Trump in 2024 even after voting for his conviction following his second impeachment trial pic.twitter.com/tWfNt57kYv

As for Biden’s promise to nominate a Black woman to the Supreme Court, Collins feels that “the way that the president has handled this nomination has been clumsy at best.”

“It adds to the further perception that the court is a political institution like Congress, when it is not supposed to be,” she told Stephanopoulos. Never mind that the Supreme Court has been perceived increasingly as a partisan institution ever since Mitch McConnell brazenly blocked the confirmation process for Barack Obama’s nominee, Merrick Garland, and then pushed through three right-wing justices on behalf of Trump. Collins’ position is sure to enrage Democrats further, especially as an aging, narrowly divided Senate includes at least one senior Democratic senator who shares Collins’ attitude on confirming a Biden nominee: What’s the rush?

Susan Collins says she’s more concerned about Biden announcing he’ll pick a Black woman than Trump announcing he’d pick a woman because Biden made his announcement when he was a candidate & therefore politicized the process. (Remember Trump’s ACB superspreader event at the WH?) pic.twitter.com/dcCGolAbhx