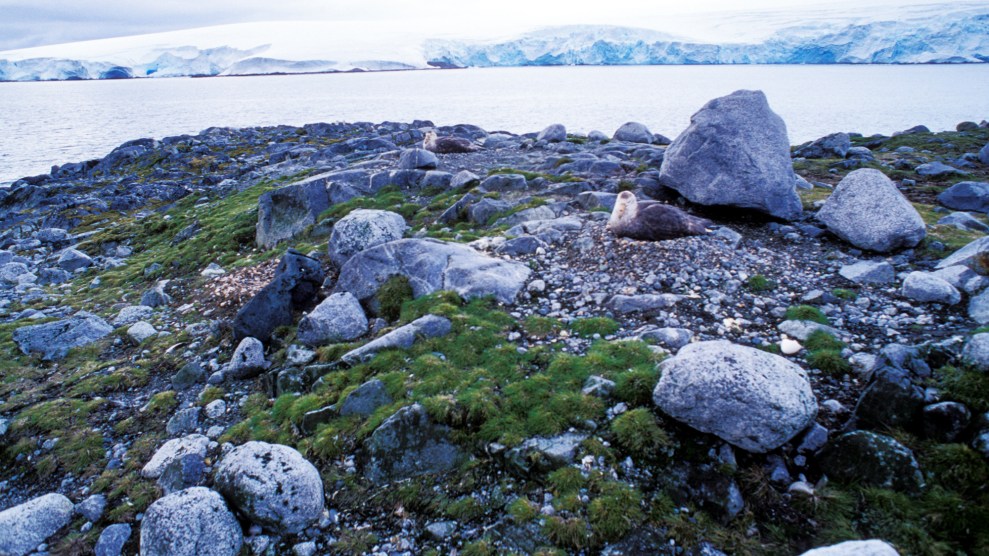 Hairgrass (Deschampsia) and pearlwort are the only two native flowering plants in Antarctica.Gary Braasch/Zuma Press

Antarctica’s two native flowering plants are spreading rapidly as temperatures warm, according to the first study to show changes in fragile polar ecosystems have accelerated in the past decade.

The increase in plants since 2009 has been greater than the previous 50 years combined, coinciding with rapidly rising air temperatures and a reduction in the number of fur seals, according to researchers working on Signy Island in the South Orkney Islands.

Populations of Antarctic hairgrass (Deschampsia antarctica) and Antarctic pearlwort (Colobanthus quitensis) have been studied by scientists on the island since 1960. Research found hairgrass spread five times faster between 2009 and 2018 than between 1960 and 2009. For pearlwort, the increase was almost 10 times more, according to the paper.

In the past decade, summer warming has increased from +0.02 C to +0.27 C each year, despite strong cooling recorded in 2012. “Antarctic terrestrial ecosystems respond quickly to these climatic inputs,” said lead researcher Prof Nicoletta Cannone, from the University of Insubria in Como, Italy. “I was expecting an increase of these plants but not of this magnitude, we are receiving multiple evidences that a major change is occurring in Antarctica.”

Soil and permafrost effects will create a cascade of changes, with “consequences on all components of terrestrial ecosystems.”

The primary driver of change is warming summer air, according to the study, which provides one of the longest records of changes in vegetation in Antarctica. A secondary reason is there are fewer fur seals on the island, which trample on the plants. It is not known why the number of seals has declined but it is likely to be related to changes in food availability and sea conditions.

Analysis shows that fur seals influenced changes from 1960 to 2009, while the main driver between 2009 and 2018 was temperature increase.

Warming trends are expected to continue, with more ice-free areas created over the coming decades, and scientists say the findings from Signy Island are representative of processes happening in the region more generally. “Our findings support the hypothesis that future warming will trigger significant changes in these fragile Antarctic ecosystems,” researchers wrote in the paper, published in Current Biology.

The spread of these species will cause changes in soil acidity, the bacteria and fungi in the soil, and in how organic matter decomposes. Changes in soil chemistry, as well as degradation of permafrost, will cause a cascade of changes, with “consequences on all components of terrestrial ecosystems,” said Cannone.

The plants are adapted to a very short growing season and are able to photosynthesize in snowy conditions with air temperatures below 0 C. Despite being able to reproduce quickly and in harsh climatic conditions, they are not good at competing with other non-native plants. Although warming may benefit some native species in isolation, it greatly increases the risk of the establishment of non-native species that could outcompete native species and trigger irreversible wildlife loss, researchers warn.

In 2018, for example, an invasive grass species called Poa annua—which is often used on golf courses—colonized Signy Island. Cannone said: “The ingression of alien species can induce a dramatic loss of the native biodiversity of Antarctica which required million of years of evolution and survival. Moreover, the vegetation change will imply a domino effect on the whole biota of the terrestrial ecosystems.”

During the mid-Pliocene, the Antarctic experienced warming events that allowed the spontaneous migration of species from South America to Antarctica, and the other way around. Current levels of warming could have already triggered such migrations of mosses, lichens, vascular plants, and invertebrates, facilitated by human activity—namely increasing levels of tourism—in the Antarctic, scientists warn.

Dr Kevin Newsham, a terrestrial ecologist at British Antarctic Survey, who was not involved in the study, said: “The study shows that further increases in populations of these plant species can be expected as Antarctica warms in future decades, leading to a greening of the region, but that there may also be increased risks to ecosystems associated with the establishment of alien plant species.”

Correction: A Mother Jones editor mistakenly used “Arctic” in the original headline, rather than the correct term, “Antarctic.”