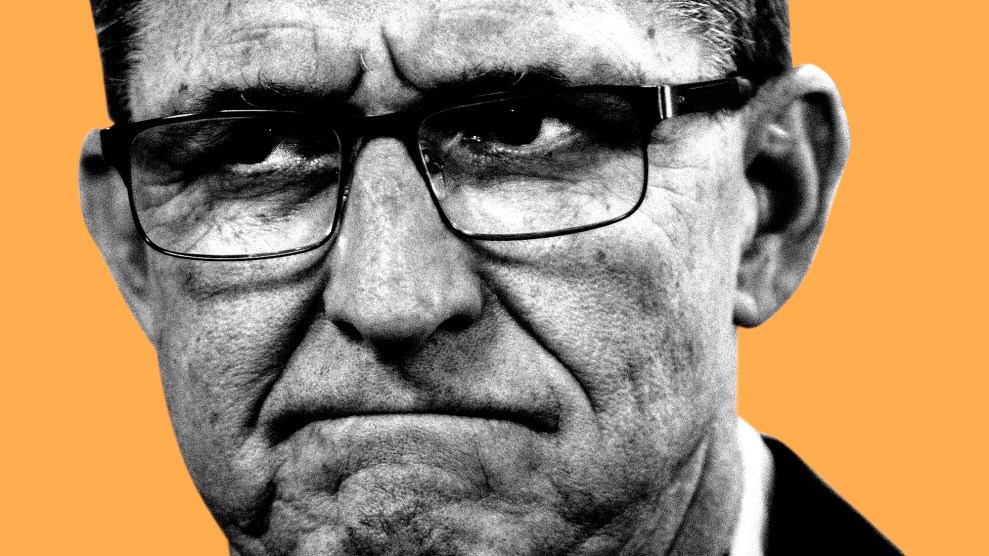 Editor’s note: This essay by David Corn first appeared in his newsletter, Our Land. But we wanted to make sure as many readers as possible have a chance to see it. Our Land is written by David twice a week and provides behind-the-scenes stories about politics and media; his unvarnished take on the events of the day; film, books, television, podcast, and music recommendations; interactive audience features; and more. Subscribing costs just $5 a month—but right now you can sign up for a free 30-day trial of Our Land here.

I need your help. I am puzzled. I would like to understand what made Michael Flynn go batcrap crazy.

Flynn has been off the ranch of reality for some time. In July 2020, he posted a video with explicit references to QAnon, the bonkers conspiracy theory that holds that a global cabal of cannibalistic pedophiles, dominated by prominent Democrats and liberal billionaires, are battling Donald Trump for control of the world. Yet in November a recording of Flynn became public in which he apparently called QAnon “total nonsense” and said it was a “disinformation campaign” mounted by the CIA and the left, presumably to discredit pro-Trump forces—yet another nutty conspiracy theory. Following the 2020 election, Flynn was an enthusiastic co-conspirator in pushing the Big Lie that the election was stolen and raised the idea of Trump declaring martial law. This past week, Flynn—who resigned after a few weeks as Trump’s first national security adviser because he was caught lying to the FBI about his contacts with Russia—descended further down the loony hole. Appearing on the website of scoundrel conspiracy-monger Alex Jones, Flynn claimed that international agencies run by global elites, including George Soros and Bill Gates, intentionally spread Covid-19 so these big shots can “control humanity” and “rule the world.” 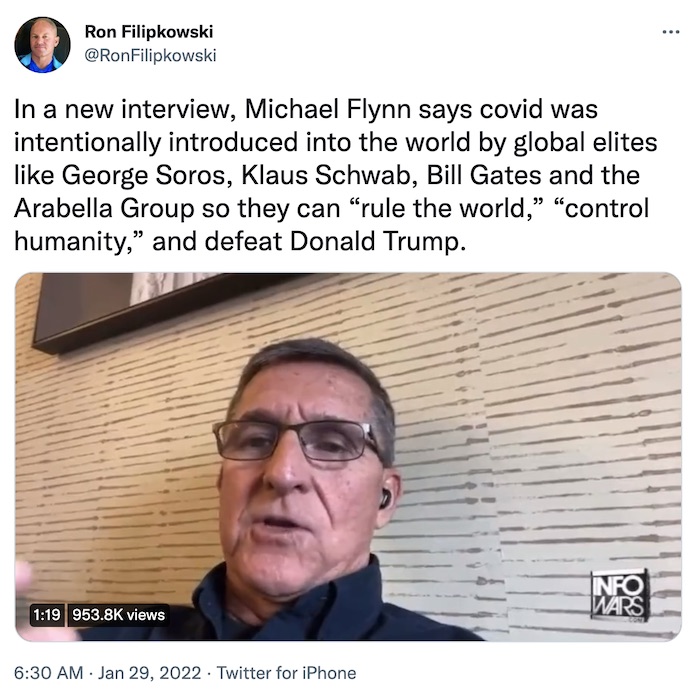 This is a QAnonish idea—minus the baby-eating and human trafficking—and echoes Flynn’s previous assertion that Covid was devised to divert attention from the 2020 election theft, even though the virus struck before there was any controversy over the election.

What’s frightening is that Flynn, who pleaded guilty to misleading the feds and was pardoned by Trump, was once an important and powerful person in the national security establishment. (Call it the Deep State, if you prefer.) He served in a host of key positions in the US Army and for a time oversaw military intelligence in Afghanistan. After being promoted to lieutenant general, he was appointed in 2012 by President Barack Obama to head the Defense Intelligence Agency, which collects intelligence about the military intentions and capabilities of foreign governments and non-state actors, including terrorist organizations. Its important work accounts for about a quarter of the information in the daily intelligence brief prepared for the president. The security of the nation rests, in part, on what the DIA does.

Flynn led that agency for two years, but he developed a reputation at the DIA for repeating dubious assertions—what his subordinates referred to as “Flynn facts”—and was reportedly forced out as DIA chief due to his poor management skills. He left government service, opened the Flynn Intel Group, and became ensnared in several controversies. He was paid $45,000 to speak in Moscow at the 10-year anniversary celebration of RT, a Russian propaganda outlet, and sat at a banquet table with Vladimir Putin. (This was one year after Putin invaded and annexed Crimea.) In 2017, the Wall Street Journal reported he was being investigated for participating in a plot to kidnap a Muslim cleric living in the United States and deliver him to Turkey in return for millions of dollars. Flynn denied he had been involved in such a scheme.

These and other episodes prompt questions about Flynn’s judgment, or lack thereof. But there is a large distance between making bad choices to grub big bucks and going full nutter. We should recognize that he’s not the first to follow this career path. There is a long line of former generals gone barmy or extremist. General Edwin Walker was forced out of the Army in 1961 when it was learned that he was promoting ultra-right information to the troops, and soon afterward he was arrested for helping to organize violent riots at the University of Mississippi to block the admission of a Black student. (Attorney General Robert Kennedy ordered him placed in a psychiatric facility for three months, but he was released after a few days.) Retired Air Force General Curtis LeMay, who had earned the reputation as something of a mad bomber, was the vice presidential running mate of segregationist George Wallace in 1968. Maj. General John Singlaub was forced to retire from the Army in 1978 after questioning President Jimmy Carter’s national security policies, and he ended up heading the World Anti-Communist League, an extreme-conservative outfit that included fascists, anti-Semites, and overseas officials connected to death squads.

Lt. General Jerry Boykin, who was deputy undersecretary of defense for intelligence in the George W. Bush administration, got into hot water while in the service for making comments denigrating Islam. He left the Army in 2007 and became vice president of the Family Research Council, a religious right organization. At a conference in 2014, he was caught by a hot mic saying that Obama “identifies with” al-Qaeda and the Muslim Brotherhood and has “been supportive of them inside the United States and is unwilling to go against them.” This was three years after Obama launched the raid that killed Osama bin Laden. More recently, retired Air Force Lt. General Thomas McInerney, a former Fox analyst and military adviser for the Trump campaign, has been pushing a wide-ranging mega-conspiracy theory that the Chinese government and the Democrats together concocted Covid to disrupt the 2020 election, that the CIA altered election results, that Pakistani intelligence hacked election machines in Georgia, that an Italian military satellite changed the vote count, and that it was antifa that attacked the US Capitol on January 6. PolitiFact called these “false and baseless claims.” You don’t say.

Let’s be fair: Most retired generals don’t go batty. But what happened to Flynn in particular? I once asked an intelligence officer who had worked with him at the DIA this question. This person had no explanation. Flynn had been a diligent commander, though sometimes difficult to work with. He appeared to reside in the realm of rational thought, my source said. This person was dismayed by his dive into the deep end of Trumpist conspiracism. Certainly, bitterness over being booted from the DIA had driven him toward Trump and the battle against the national security establishment. By signing up with Trump, he regained relevance and influence that could be useful for his business endeavors. Still, such a tactical move was in a much different category than enlisting in Alex Jones’ army of the deranged.

The last time I spoke to Flynn was before the final presidential debate of the 2016 campaign. As part of Trump’s head moves aimed at Hillary Clinton, Trump had brought as a guest to the debate Malik Obama, the president’s half-brother, who was a Trump fan but also a supporter of Hamas (which has called for the eradication of Israel). And Trump’s allies engineered a pre-debate press conference with Danney Williams, a Black man who claimed to be Bill Clinton’s son. (A 1999 DNA test found no link between Clinton and Williams.) I asked Flynn if such stunts were a sign that Trump was more focused on throwing red meat to his angry base than winning over moderate voters. Flynn loudly replied, “What he’s doing is waking up this country to the fact we have an enormous amount of corruption inside Washington.” That seemed a non sequitur. The discredited Danney Williams story and Malik Obama had nothing to do with political corruption. In retrospect, perhaps this comment reveals Flynn’s own mindset: He saw himself the victim of insider corruption.

I’m not sure how such grievance turns a person into an Alex Jones accessory. Does a man who once oversaw intelligence for a living truly think that Soros and Gates cooked up Covid so they can reign supreme over the Earth? I can understand how someone who has never left their hometown and who falls into the Infowars pit might believe the world functions in this fashion. But a former general who has traveled the globe, who has had access to wide-ranging and sensitive information, and who has interacted with the mighty? QAnoners will say, That’s why Flynn is saying this stuff. He’s been on the inside. He knows! But the sane among us realize that his past only makes his story more curious and incomprehensible.

Is Flynn doing this because there’s money to be made? Surely there are less-unhinged avenues for earning a dollar. Is this just one gigantic troll—and Flynn doesn’t care how foolish he looks, if he can own the libs? Does he really buy this stuff? Does he want us to think he does? If one were to apply the logic of conspiracy theory to Flynn, you might hypothesize that he is a Russian agent spreading disinformation and sowing discord. Or, you might speculate, he’s part of a false flag operation run by our Deep State, a double agent pretending to disseminate divisive disinformation so he can penetrate Russian intelligence. Or is he actually an agent of the sinister globalists who are implementing more mundane plans for controlling the world and he’s distracting us from seeing those plots by making outrageous claims? Or…

The case of Michael Flynn is mysterious. Like believers of conspiracy theories, I want to know the real answer.