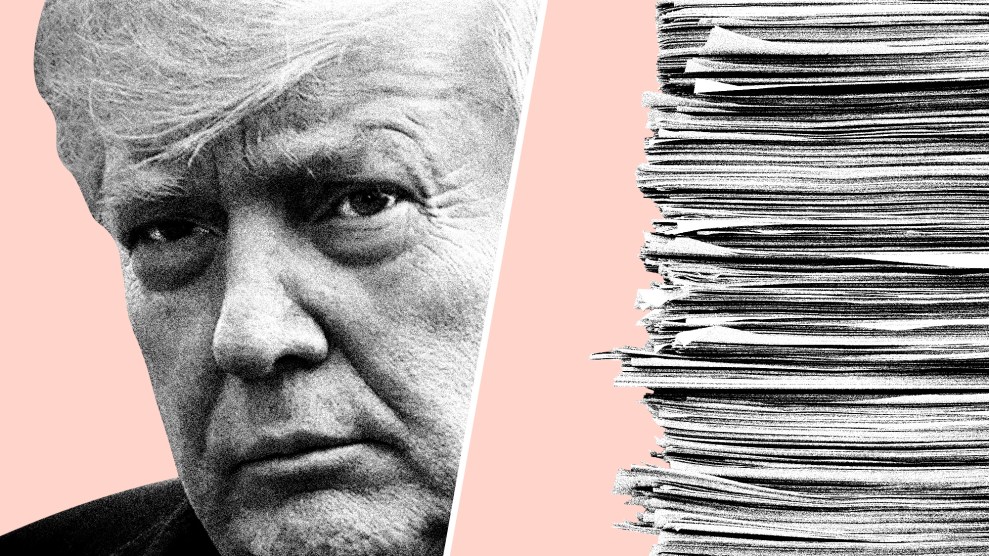 The latest Donald Trump scandal is about as surprising as finding mold on pizza left in the fridge for a month. A few days ago, the Washington Post revealed that when Trump vacated the White House he took 15 boxes of presidential documents and other items with him. That was a possible violation of the Presidential Records Act, which requires the preservation of all documents—memos, letters, notes, emails—related to a president’s official duties. It was enacted in 1978 after Richard Nixon absconded with a host of material from his tainted presidency. The National Archives and Records Administration retrieved the Trump records from Mar-a-Lago, and it has asked the Justice Department to investigate. But, of course, the story is crazier. In a forthcoming book on Trump, New York Times correspondent Maggie Haberman reports that staff in the White House residence periodically found clumps of paper clogging a toilet and believed Trump was flushing pieces of paper—another sign the chief executive may have been violating the records act. “It was not toilet paper,” Haberman told CNN.

This is not entirely a new controversy. In 2018, Politico reported that Trump routinely ripped up documents and tossed them into the garbage and aides had to retrieve the torn fragments and tape them back together to meet the preservation requirements of the law.

This all raises the question: Can Trump be prosecuted for violating federal law? And if he is found guilty, could he be blocked from seeking the presidency again?

According to the Congressional Research Service, anyone who engages in the “unlawful removal or destruction of government records” is subject to punishment under Title 18, Section 2071, of the US Code. And that section notes:

Whoever, having the custody of any such record, proceeding, map, book, document, paper, or other thing, willfully and unlawfully conceals, removes, mutilates, obliterates, falsifies, or destroys the same, shall be fined under this title or imprisoned not more than three years, or both; and shall forfeit his office and be disqualified from holding any office under the United States. As used in this subsection, the term “office” does not include the office held by any person as a retired officer of the Armed Forces of the United States. [Emphasis added.]

In case you missed the italicized words, the punishment includes a ban on holding a US government position. So, would a guilty verdict prevent Trump from trying to move back into 1600 Pennsylvania Avenue?

It seems Trump violated the law—at least its intent. But that does not mean a prosecution is coming. “You can’t prosecute for just tearing up papers,” Charles Tiefer, a former House counsel, told the Washington Post. “You would have to show [Trump] being highly selective and have evidence that he wanted to behave unlawfully.” But on MSNBC, Daniel Goldman, a former prosecutor, said that Trump’s regular destruction of White House documents could be a clear case of prosecutable wrongdoing.

Yet if there were a prosecution could Trump, if found guilty, be disqualified from running for president? That provision could run smack into the Constitution, which establishes only three qualifications for a president. (The president must be at least 35 years of age and a natural born citizen and must have lived in the United States for at least 14 years.) Noah Bookbinder, the president of Citizens for Responsibility and Ethics in Washington, which has called on the Justice Department to investigate whether Trump violated the law by destroying records, says that the disqualification provision poses “difficult legal questions which we, and the Justice Department and courts, would have to work through, but that we think it’s important for DOJ to investigate these likely violations and act to bring about accountability whether or not that provision is applicable.”

The main question is whether Congress, which passed the Presidential Records Act, can place any limits on a presidential candidate beyond those already in the Constitution. Congress once added a disqualification, but that was through the post–Civil War passage in 1866 of a constitutional amendment—the 14th Amendment—which bars from office anyone who “engaged in insurrection or rebellion” against the United States” or gave “aid or comfort to the enemies thereof.” In 2019 California passed a law requiring presidential candidates to release their tax returns in order to appear on the state ballot—but the state’s highest court struck down the law.

Norm Eisen, who was was co-counsel for the House Judiciary Committee during Trump’s first impeachment, notes that trying to apply the disqualification provision related to the presidential records act to Trump would be an uphill constitutional climb. “It would raise a substantial constitutional question,” he says, “because it would constitute Congress placing an additional qualification on the office of the presidency after the Constitution itself had established the criteria. But it is an open question of law. The final resolution would be up to the courts and the Supreme Court.”

The old saw is that Al Capone met his demise because of tax crimes. It’s unlikely Trump will meet his because he flushed papers down the White House commode.