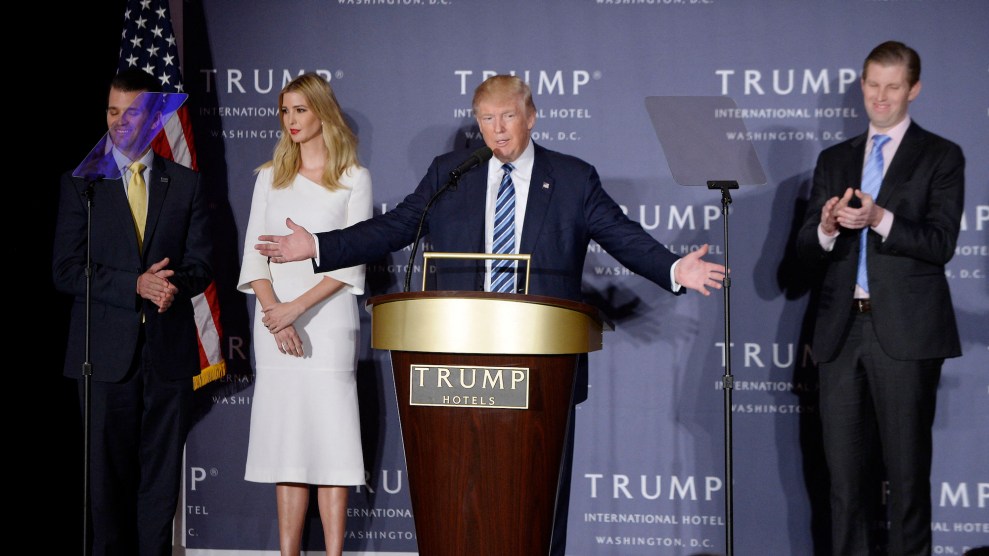 A New York judge ruled Thursday afternoon that former President Donald Trump and two of his children—Ivanka Trump and Donald Trump Jr.—must comply with subpoenas issued by New York Attorney General Letitia James as part of her ongoing civil investigation into whether Trump and his company committed bank and insurance fraud. James has been scrutinizing Trump for several years. For most of that time, the Trump Organization had cooperated with her investigators. But in early January, James issued subpoenas to force the Trumps to sit for depositions in the case. The former first family decided to fight the subpoenas in court.

New York Superior Court Judge Arthur Engoron issued a scathing ruling following a hearing on Thursday morning, writing that the Trumps’ attorneys had little evidence on their side and had almost entirely failed to make their case. The Trumps have 14 days to turn over documents that were subpoenaed and 21 days to sit for depositions.

James has said she is investigating whether Trump may have committed fraud by misleading banks, insurance companies, and tax authorities over the value of his properties—providing higher values when it was helpful for getting a loan, for example, and lower figures when it came time to pay taxes that are based on property values. James is also working with the Manhattan district attorney’s office, which is conducting a criminal investigation into similar allegations.

During a hearing Thursday morning, the Trump attorneys appeared to have few serious points of legal argument to make. Alan Futerfas, a corporate attorney for the Trump Organization, argued that James had publicly made statements promising voters that she would target Donald Trump as attorney general and that her cooperation with the Manhattan DA’s office in its simultaneous criminal investigation was creating a quandary for the former president. Ron Fischetti, a criminal defense attorney representing Trump, similarly—and often times quite loudly—argued that he couldn’t allow the former president to answer any of James’ questions in a civil deposition because those answers could be used against him in the criminal matter, which could violate his constitutional rights.

“This argument completely misses the mark,” Engoron wrote in his ruling, noting that Trump can always invoke his Fifth Amendment right to refuse to answer questions posed to him during the deposition on the grounds that doing so could incriminate him in the criminal investigation. The judge noted that Eric Trump, who did sit for a deposition, refused to answer questions more than 500 times.

During the hearing Fischetti argued that appearing at the deposition but taking the Fifth would make Trump look bad and unfairly bias the public—and potential jurors—against him.

“It’ll be on every front page of every newspaper in the world,” he said. “And how can I possibly pick a jury in that case?”

But much of the hearing—and much of Engoron’s ruling—was dominated by arguments from Alina Habba, an attorney who represents Trump personally in the case. Habba often appeared to be appealing to her client, or at least members of the MAGA public watching the hearing, rather than to the judge, whom she regularly interrupted (and was scolded for doing so). Among other things, Habba argued that James’ investigation into Trump was “viewpoint discrimination,” that James was discriminating against Trump because of his political speech. In particular, she pointed to an instance in which James had referred to Trump as “an illegitimate president” during her campaign for attorney general.

“Are you saying that if Bill Clinton was president she would be calling him an illegitimate president?” Habba asked the judge, before launching into a tirade about the Clintons and demanding that James’ representative in court, Kevin Wallace, explain the attorney general’s position on Trump’s 2016 opponent. “Quite honestly, your honor, I want to know, Mr. Wallace, Ms. James, are you going to go after Hillary Clinton for what she’s doing to my client, that she spied at Trump Tower in your state? Are you going to look into her business dealings?”

“The Clintons are not before me, so again, those political considerations, that’s not what I’m here to do,” Engoron replied.

In recent speeches Trump has railed against James and several other prosecutors around the country who are investigating him or his companies, complaining that they are “radical, vicious, racist prosecutors.” But Engoron said that in court, at least, his attorneys had completely failed to make the argument that there had been any discrimination.

“Here, the [respondents] have failed to submit any evidence that the law has not applied to others similarly situated, nor have they submitted any evidence of discrimination based on race, religion, or any other impermissible or arbitrary classification,” he wrote.

Habba also argued that because James had made a number of statements saying she would investigate Trump if she was elected, and since being elected has talked about investigating him, the entire investigation amounted to a politically biased, selective prosecution. Wallace noted that the New York attorney general’s office was investigating Trump’s finances before James ever ran for the office and that under previous attorney generals, the office had dealt with Trump on fraud issues, including in a case involving Trump University case and an investigation into Trump’s charity.

“This is not a person who was unfamiliar to the office or who didn’t already have issues around fraud. It’s entirely reasonable for a law enforcement agency upon receipt of information about additional financial misconduct by a recidivist to then investigate that,” Wallace told Engoron. “I don’t think any of this indicates there was an improper motive or an improper purpose.”

In his ruling, Engoron agreed, noting, “Donald J. Trump was hardly a stranger to the Attorney General’s office.”

Earlier this week, James’ office submitted a letter from Trump’s longtime accounting firm, Mazars, saying that it no longer stood by years of financial statements the firm had prepared for the Trump Organization to use in its efforts to get loans and insurance coverage. James’ office said that the letter proved there was substantial reason to continue the investigation. In public statements, the Trump Organization and Donald Trump himself pushed back on that and argued, nonsensically, that the Mazars letter actually cleared Trump of any wrongdoing.

Notably Mazars did not say “there were no material discrepancies in the financial statements”. They said this: https://t.co/nHgiKy7hvD pic.twitter.com/Gs9OvSfD3U

In his ruling, Engoron seemed to take particular issue with the Trumps’ efforts to portray the Mazars letter as somehow exculpatory. The judge compared that spin to Orwellian newspeak: “The idea that an accounting firm’s announcement that no one should rely on a decade’s worth of financial statements that it issued based on numbers submitted by an entity somehow exonerates that entity and renders an investigation into is past practices moot is reminiscent of Lewis Carroll (‘When I use a word, Humpty Dumpty said…it means just what I chose it to mean—neither more nor less’); George Orwell (‘war is peace, freedom is slavery, ignorance is strength’) and ‘alternative facts.'”

In her own statement, James said that Engoron’s ruling showed that no one is above the law.

“Today, justice prevailed,” James said. “Donald J. Trump, Donald Trump, Jr., and Ivanka Trump have been ordered by the court to comply with our lawful investigation into Mr. Trump and the Trump Organization’s financial dealings. No one will be permitted to stand in the way of the pursuit of justice, no matter how powerful they are. No one is above the law.”

Engoron’s full ruling is below.