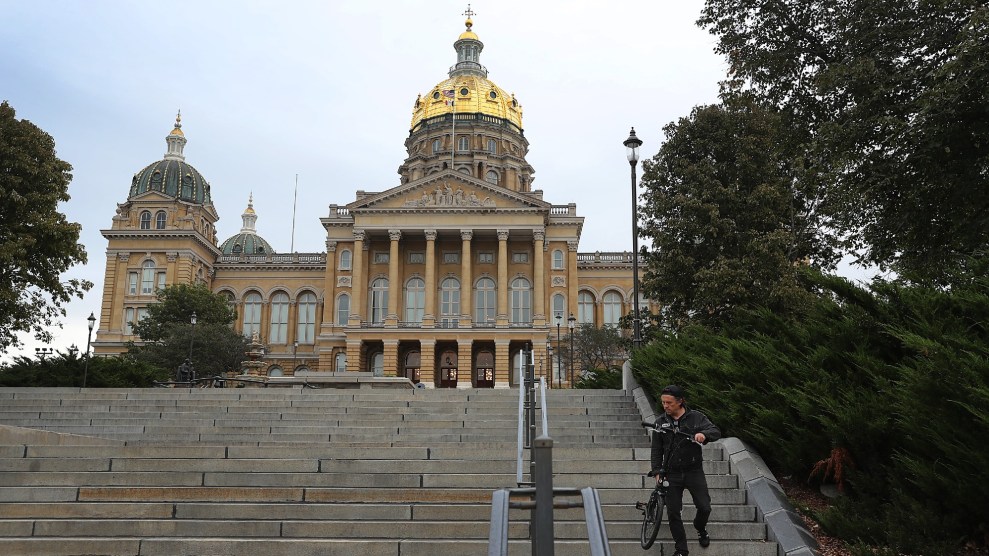 Amid the ongoing Republican freakout over Critical Race Theory and the teaching of other supposedly objectionable material in public schools, an Iowa Republican has introduced a bill that would take the policing of the state’s teachers to a whole new level.

Earlier this week, Republican state Rep. Norlin Mommsen introduced a bill to place cameras at the back of public school classrooms so parents can monitor what’s being taught there. The seemingly Orwellian idea would function in a similar way to a body camera on a police officer, Mommsen told The Center Square, a conservative news site.

“A camera takes away the ‘he said, she said’ or ‘he said, he said,’ type argument and lets” parents “know ‘hey, we are doing a good job,'” Mommsen said.

He is not the first to introduce the idea of recording classrooms, which the Iowa State Education Association president said “should not even be considered.” In Nevada, a right-wing “family alliance” promoted this concept in June as a way to ensure teachers “stick to traditional teaching.”

Mommsen’s bill, he told The Center Square, was actually intended to address the concerns of Iowa State Senate president Jake Chapman, who has said teachers should be charged with felonies for distributing “obscene” material to students. “One doesn’t have to look far to see the sinister agenda occurring right before our eyes,” Chapman said last month in an address to the Iowa Senate. “The attack on our children is no longer hidden. Those who wish to normalize sexually deviant behavior against our children, including pedophilia and incest, are pushing this movement more than ever before.”

Mandatory cameras in the classroom “would eliminate this ‘sinister plot’ chatter because the video shows there’s not a sinister plot,” Mommsen said.

If the past several weeks are any clue, the “sinister plot” chatter is actually just beginning. Conservatives have long fought to purge school curriculums of material deemed too critical of the United States. The obsession over critical race theory, a once-niche academic idea that has come to encompass any sprawling focus on racism, has led Republican-led school districts to crack down on the books in school libraries such as Toni Morrison’s Beloved.

In November, Texas Gov. Greg Abbott urged the top state education official to investigate the “availability of pornography” in public schools. Last month, a Tennessee school board banned Maus, a Pulitzer Prize-winning graphic novel about the Holocaust, because of its sexual content. “We don’t need all the nakedness and all the other stuff,” board member Mike Cochran said. (In the book, all characters are represented as animals.) And earlier this week, legislation introduced in the Michigan House of Representatives would require educators to provide a public list of their curriculum, textbooks, planned field trips, and research projects before the start of the school year, part of a “curriculum transparency” movement already adopted in other states.

The outrage over what materials teachers use and how they use them can obscure other, more pressing problems affecting students in public schools. “Instead of wasting public funds on monitoring equipment, we should employ additional qualified professionals, reduce class sizes, and provide more programming that helps students acquire the skills they need,” National Education Association president Becky Pringle told NBC News.