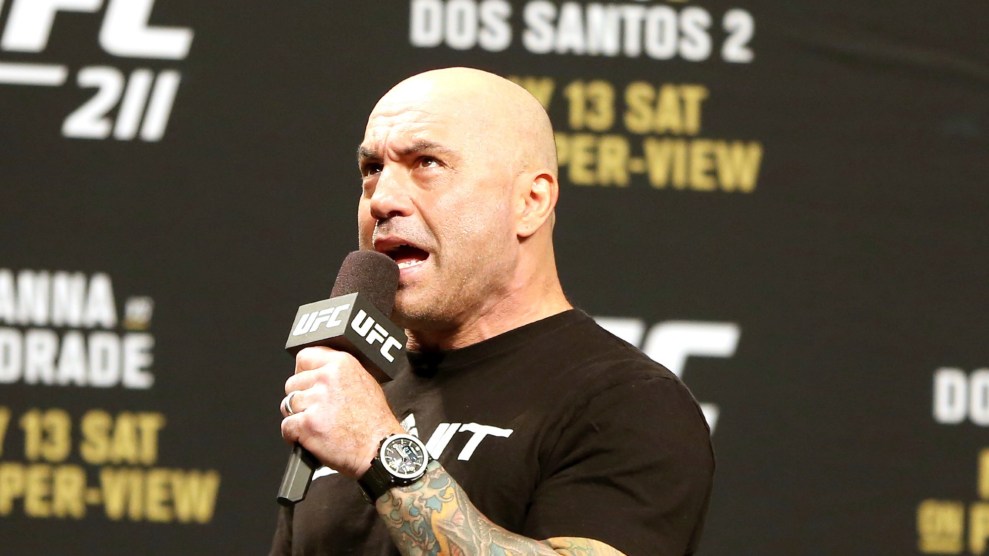 The controversy over podcast host Joe Rogan reached a new stage on Saturday when Spotify quietly removed 70-some episodes from his show’s archives.

Though the company hasn’t officially explained why the content was taken down, the move came as Rogan posted an Instagram video apologizing for repeatedly using the n-word in past episodes, as well as for once comparing a movie theatre’s all-Black audience to Planet of the Apes.

Whenever you’re in a situation where you have to say, ‘I’m not racist,’ you fucked up.

The Joe Rogan Experience, Spotify’s flagship podcast, came under heightened scrutiny a little over two weeks ago when rock legend, Monsanto critic, and Jim Jarmusch–collaborator Neil Young requested that Spotify pull his music in protest over Rogan’s role in spreading Covid-19 misinformation. (Young also complained that he didn’t like the platform’s audio quality.) Other artists and podcast hosts whose work had been available on the platform, including Joni Mitchell, Roxane Gay, and Nils Lofgren, soon followed Young’s lead.

Joe Rogan is a politically heterodox figure whose anti-establishment views have sometimes led him to host figures from the fringes, including right-wing conspiracy theorist Alex Jones and Jordan Peterson, the libertarian, carnivore, mystic self-help expert. During the coronavirus pandemic, Rogan invited anti-vaxxers like Peter McCullough and Robert Malone, who used his massive platform to spread a series of false claims about the Covid-19 vaccines. Rogan has said that he’s just interested in having conversations, and has also hosted figures more on the left. While he does occasionally fact-check his guests, conversation is usually friendly, allowing guests to elevate harmful assertions that cut against the scientific consensus.

Spotify’s move comes after Friday, when singer India.Arie, in explaining why she had asked Spotify to remove her music, posted an Instagram video compilation capturing Rogan saying the n-word 22 times in past episodes of the show.

In his latest apology, Rogan deemed his use of the slur as “the most regretful and shameful thing I’ve ever had to talk about publicly.” The podcast host, while acknowledging that “it looks fucking horrible—even to me,” sought to minimize the clips, saying they were taken “out of context” from “12 years of conversations.”

Rogan emphasized that he had said the word while discussing other comics’—like Richard Pryor, Redd Foxx, Paul Mooney, and Lenny Bruce—use of the slur. However he said that he has since learned that the slur is “not my word to use.”

“I know that to most people, there is no context where a white person is ever allowed to say that word, never mind publicly on a podcast. And I agree with that now. I haven’t said it in years,” Rogan said. “I thought as long as it was in context, people would understand what I was doing.”

Rogan’s video also addressed a clip of him on his show recorded around a decade ago where he told a story he admitted “looks terrible even in context” about seeing Planet of the Apes in a Black neighborhood in Philadelphia. “I was trying to make the story entertaining and I said it was like we got out and we were in Africa. It’s like we were in ‘Planet of the Apes,'” Rogan said, in attempting to explain remarks that he called “idiotic.”