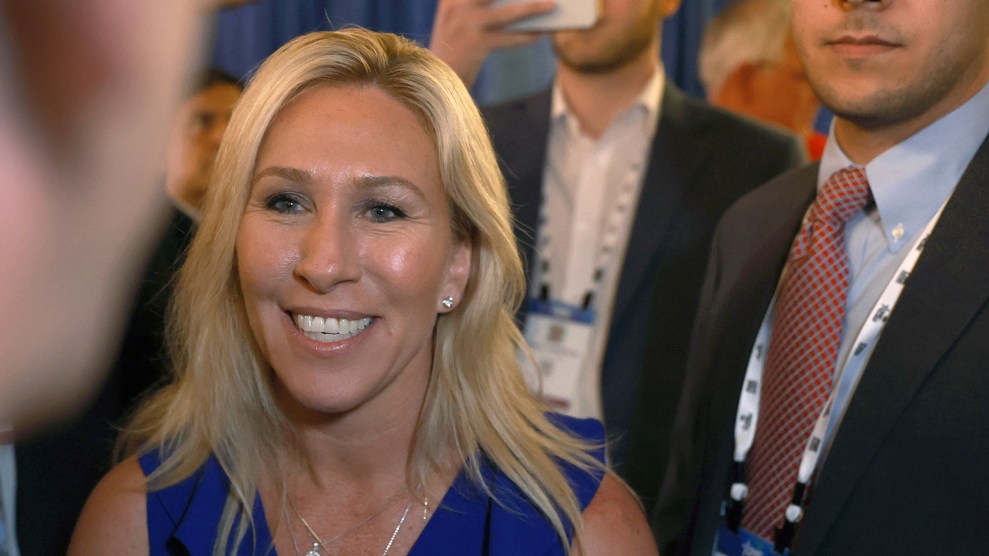 Rep. Marjorie Taylor Greene (R-GA) is escorted through a throng of media at the Conservative Political Action Conference on February 26, 2022 in Orlando, Florida. Joe Raedle/Getty Images

Rep. Marjorie Taylor Greene (R-Ga.) was warmly welcomed at the Conservative Political Action Conference (CPAC) on Saturday, the day after she appeared as a surprise speaker at the white nationalist conference hosted by anti-Semitic, white nationalist activist Nicholas Fuentes. In the past, CPAC has shunned the fringiest, most racist elements of the Republican Party. That’s why Fuentes created the America First Political Action Conference (AFPAC). It offers white nationalists who are trying to capture the GOP their own place to gather adjacent to the more mainstream CPAC. But the Trumpist, white nationalist fringe is increasingly welcomed in today’s GOP, and Greene’s easy shift from one conference to another demonstrates that trend.

Times are changing fast. Just three years ago, Republican leadership stripped Rep. Steve King (R-Iowa), a buddy of Fuentes, of his committee memberships after he voiced support for white nationalism in a New York Times interview. King went on to lose his Republican primary after having held the seat for nine terms. Two years later, the Democratic House majority stripped Greene of her committee assignments over anti-Semitic, conspiracy-laden, and violent comments—though this time most of her Republican colleagues supported her. Fast forward to this weekend, when Greene saw no consequences from the party’s standard-bearers after she embraced Fuentes. Fittingly, as Mother Jones’ Stephanie Mencimer noted, she appeared at CPAC on a panel titled, “They Can’t Shut Us Up!”

I thought maybe #cpac2022 might kick Marjorie Taylor Greene off her panel this am after she appeared last night at a white nationalist event, but no. She's now on a panel appropriately called "They can't shut us up!" https://t.co/uD2mg474pE

Fuentes has a long history of voicing opinions that used to get you ostracized in Washington. Here is a sample, compiled by the Anti-Defamation League:

He has referred to Daily Wire columnist Matt Walsh as “shabbos goy race traitor” because he works for Jews (Ben Shapiro, a Jewish conservative, runs the Daily Wire). On a livestream episode, Fuentes “jokingly” denied the Holocaust and compared Jews burnt in concentration camps to cookies in an oven. On May 24, 2021, Fuentes participated in a debate on right-wing conspiracist Alex Jones’ InfoWars with Robert Barnes, a man described as a “constitutional lawyer” who has legally defended both Jones and Kenosha shooter Kyle Rittenhouse. During the debate, Fuentes made numerous anti-Semitic remarks, including, “I don’t see Jews as Europeans and I don’t see them as part of Western civilization, particularly because they are not Christians.”

Fuentes marched at the deadly white nationalist rally in Charlottesville in 2017. On January 6, he was outside the US Capitol urging the mob to participate in the insurrection inside. In January, he was subpoenaed by the January 6 Commission. As for Greene, her own story includes joining Congress last year as a supporter of the pro-Trump QAnon conspiracy theory and describing January 6 as “just a riot…and if you think about what our Declaration of Independence says, it says to overthrow tyrants.” Before the Georgia representative took the stage at AFPAC, Fuentes led the crowd in a round of cheers for Russia’s invasion of Ukraine and Russian President Vladimir Putin. At the end of the conference, New York magazine reported, Fuentes offered praise for Adolf Hitler: “And now they’re going on about Russia and ‘Vladimir Putin is Hitler’—they say that’s not a good thing.”

As Greene left CPAC on Saturday, she denied to reporters that she knew anything about Fuentes, claiming she had spoken at AFPAC to reach Fuentes’ “very large audience.” Greene has a history of espousing racist views, only to later claim ignorance.

When Marjorie Taylor Greene cited a conspiracy about Jewish space lasers, she said she didn’t know more about it.

When she compared mask wearing to Nazi laws, she said she hadn’t known more about it.

When she spoke to white nationalists, she said she didn’t know about them. https://t.co/zGbglHa5QQ

But as the popular saying goes: “Tell me who you walk with and I’ll tell you who you are.” That goes for Greene and, increasingly, the entire Republican Party.