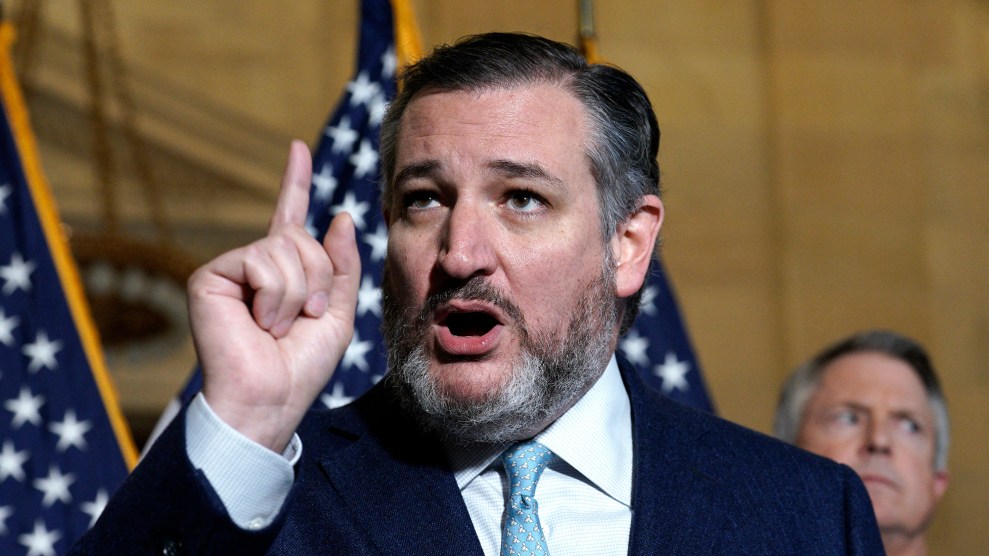 Former Judge J. Michael Luttig said in a New York Times opinion piece yesterday that the current Republican Party is cleaved in two. On one side are those who believe the last election was legitimate, including Luttig, a prominent conservative appeals court judge from 1991 to 2006. The other side are those who, loyal to Trump, insist the 2020 election was stolen—and includes at least two of Luttig’s former clerks, John Eastman and Ted Cruz.

Luttig helped nurture both men’s careers; for more than a year now, he’s been trying protect the country against them.

In the lead-up to the January 6 insurrection, Luttig found himself pitted against Eastman. Trump was putting pressure on Vice President Mike Pence to delay certification of the election that day. One of his lawyers, John Eastman, was the architect of this insane legal strategy. He wrote a memo to Pence outlining his supposed authority to stop the certification of Biden’s win. Under pressure, Pence turned to Luttig for advice, and Luttig refuted Eastman. When Pence announced on January 6 that he would not interrupt Congress’ counting of the electoral votes, he quoted Luttig. Eastman, meanwhile, stood beside Rudy Giuliani and whipped up the crowd at the “Save America” rally with bogus allegations of election fraud. Today, Eastman is in a legal struggle with the January 6 committee, which is seeking access to his communications with Trump about overturning the election.

Inside the US Capitol, Sen. Ted Cruz (R-Texas), another former Luttig clerk, was also working to subvert American democracy, by urging his colleagues to delay proceeding so they could investigate specious claims of election fraud. Even after the Capitol was violently breached, Cruz exploited the Electoral Count Act to object to certification. Now, Luttig is trying to clean up that mess, too, so that his former protege cannot use it to try to derail democracy a second time.

Luttig is advising multiple Republican Senators on reforming the Electoral Count Act, according to the Times. In his Times op-ed, Luttig pointed, by name, to Cruz’s and his efforts on January 6:

After the 2020 election, Republican senators like Ted Cruz of Texas and Josh Hawley of Missouri tried to capitalize on those ambiguities in the law to do Mr. Trump’s bidding, mounting a case for overturning the results in some Biden-won states on little more than a wish. …

Trump acolytes like Mr. Cruz and Mr. Hawley should appreciate the need to reform this unconstitutional law.

Before they found themselves on opposite sides of the Trump divide, Cruz was not just an ex-clerk but something of a Luttig acolyte. According to a 2016 Times article, Cruz has described Luttig as “like a father to me.” The two deeply bonded while Cruz clerked for Luttig on the Fourth Circuit Appeals Court, where the future presidential candidate reportedly developed his zeal for the death penalty. In his 2016 campaign, Cruz, complaining about John Roberts, said he would have nominated a “rock-ribbed” conservative like Luttig as Chief Justice of the Supreme Court.

But yesterday, Luttig was a long way from displaying that sort of appreciation, writing that what Cruz did on January 6 would threaten American democracy if repeated in 2024. “The clear and present danger to our democracy now is that former President Donald Trump and his political allies appear prepared to exploit the Electoral Count Act of 1887, the law governing the counting of votes for president and vice president, to seize the presidency in 2024 if Mr. Trump or his anointed candidate is not elected by the American people,” he warned.

As Luttig advises Republican senators on reforming the law that could abet an election heist in three years, Cruz is loudly opposed to effort. Earlier this month, Politico reported he came out “most forcefully against the group’s ongoing work to raise the bar for challenging elections in Congress.”

Perhaps Luttig was thinking of his former clerk when he wrote the last lines of his op-ed: The “only members in Congress who might not want to reform this menacing law are those planning its imminent exploitation to overturn the next presidential election.”