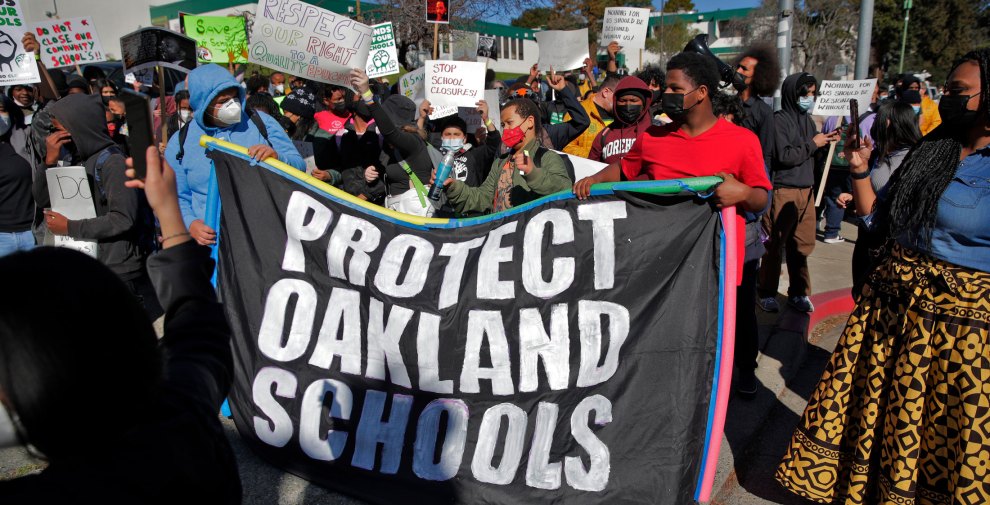 Students, teachers, and parents walked out of Westlake Middle School and marched to Oakland Unified School District offices to protest its consideration for closure by the district in Oakland, California, on February 1.Carlos Avila Gonzalez/San Francisco Chronicle/Getty

On Tuesday night, before Oakland school board members voted to shutter seven schools over the next two years in front of 1,700 Zoom onlookers, dozens of enraged students and parents in the predominantly Black and Latino school district pleaded for the district to halt a plan that would upend the lives of more than 2,700 students and their families. As Oaklandside’s Ashley McBride, who watched the hourslong meeting this week, summed up on Twitter:

This isn’t the first time Oakland officials have decided to close down schools. In fact, the moment of community outcry represented the latest chapter in the ongoing financial crisis Oakland Unified has been battling for the last decade—one that, a county grand jury report found in 2017, was caused by “management and governing problems,” including the district’s decision to operate “nearly double the number of schools than can be justified by the enrollment numbers.” In 2012, the district closed a half-dozen schools. And in 2019, it closed Roots International Academy, a predominantly Black and Latino middle school in East Oakland, and merged others.

Now, the proliferation of charter schools, as well as declining enrollment, has forced the district to go forward with the plan to close and merge more schools in an effort to avert financial peril. Community members are decrying the district’s actions, arguing that the closures disproportionately impact Black and Latino communities across Oakland. Last week, students and teachers walked out of Westlake Middle School, one of the schools originally on the list to close until board members amended the proposal to remove it. Two Westlake staffers, Community Schools Manager Moses Omolode and Choir Director Andre San-Chez, are leading a hunger strike calling for no schools to close—an effort that is entering its 10th day.

The testimonies from students and parents during Tuesday night’s board meeting drove home exactly what is at stake. One student, Rochelle, put it perhaps most succinctly:

My name is Rochelle. I am an OUSD student. And I’m here today to stand in solidarity with our community who are against these school closures. Closing down the schools that are predominantly serving Black students will significantly affect these students’ and families’ lives. You’re pushing out Black and brown students that deserve to be in their schools. We’re still in a pandemic which is hard enough to navigate. But pushing these kids and families into positions that not many can adjust to is not okay. Students’ mental health matters. It matters more than money. If you truly care about students’ mental health, then prioritize their wellbeing over money. Prioritize these relationships and connections that make them feel safe, that make them feel like they belong. They belong in their schools, with their friends, and with the teachers that they built connections with. These students, these families should never have to beg for you all to care about them the way you all promised you would. This community voted you into these positions of power because they had faith in you all to make the decisions that benefit and represent them. But these school closures do the complete opposite. These students these communities and connections matter. They will always matter more than the money.

Here are some of the other testimonies:

I am a 13-year-old at Bret Harte Middle School. My parents and mentors and teachers and tutors have always told me that we do the best work when we slow down and listen to one another especially marginalized peoples, especially black and brown and people with special needs. And that’s what I’m calling on you to do. We all make mistakes, and you probably didn’t even know we would all get this furious. But now you see our responses, and we can change and slow down. Vote NO tonight and work with us for strong solutions. Us on the call are just a fraction of the people who are very against this idea. Tonight you can be a powerful example of learning and showing us you care about students and slowing down. I want to say a huge thank you to the teachers who are on hunger strike and Michael Hutchinson for saying no to this and first standing up even under pressure and putting your bodies on the line and saying that I won’t eat until you stop this.

I’m a mother to a first grader here at the sped program at Grass Valley. I speak on his behalf. He’s nonverbal, and that’s why we need the sped program at Grass Valley. His verbal skills have improved since he’s been able to engage with other students and receive the support that he needed without us having to pay for private education. The location of Grass Valley is perfect for us. It’s only about 10 minutes away. We have behavioral therapists coming in and out of our house daily, but they can never provide us with this type of support that this public education will be able to provide us with. It just feels like you’re targeting these schools as a temporary easy fix. And as district leaders trying to educate future Oakland natives, we really need to consider who we’re really hurting with this decision that we’re making. We already have limited resources available to these students, especially mine because he needs that special education that it seems only Grass Valley can provide.

I’m in 11th grade and I attend Oakland High School. I’m part of the Youth Organizing Council and a youth organizer of Kids First…Every part of the process of school closures brings a different form of stress that will impact students’ abilities to learn and succeed in school and in the future. And because we are the future how will our communities look when there’s a whole generation of students who are struggling in school because of the decision to close schools with the highest need students?

Hi, I go to Parker Elementary/ Middle School. I’m in seventh grade. And I feel like you should not close down Parker because that school has been open for 100 years now. And we’ve been going to that school my whole life since I’ve been in second grade. And that school is a good school. We have very good teachers there, and it’s a nice environment. …It’s not right for our schools to get closed down while y’all keep open all the other schools. We need an education more like how they’re getting their education.

I’m in the 11th grade and I attend Oakland high school. I’m also a youth organizer with Oakland Kids First and absolutely am opposing school closure and consolidation because it’s affecting so many families. Every student deserves a good education. They do not need to go out of their way to do so. These schools have been serving these underrepresented communities.

You do not understand the struggles of students of color, the experience we go through and it’s disheartening to hear the students fighting for equal education. Merging and closing our school is going to overpack them, and students do not and will not get the support they need. Classrooms are already packed, this is something we already fought in previous years. This is absolutely wrong. Black students, brown students, students of color in general, low-income, should be set up for success by the district by providing investment in these schools and not closing them down. I demand that OUSD vote no on school culture and consolidation. Do the right thing and listen to the school and community.