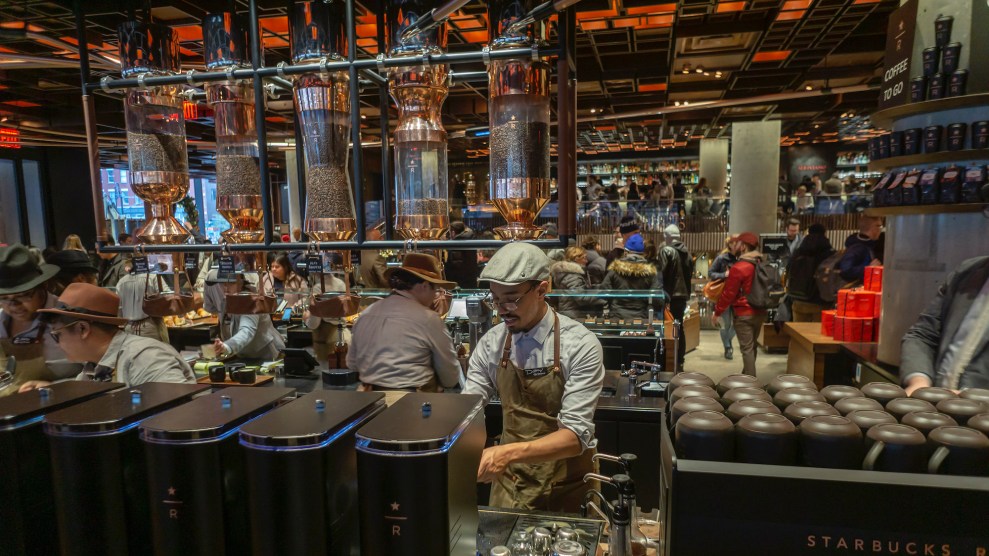 Baristas working at the Starbucks Reserve Roastery in New York on its opening day in 2018.Richard B. Levine/ZUMA

The Starbucks Roastery in Manhattan exists because Starbucks founder Howard Schultz wanted to build a Willy Wonka-inspired coffee factory. The result is a gigantic dark-wood-and-copper-clad store where ceiling-mounted tubes rattle beans roasted on-site to baristas. The company calls these subway-inspired tubes “symphony pipes” because they produce the “tinkling sound of rain.”

When I dropped in on the Meatpacking District shop this week, I ordered a small black coffee ($8.60 after tax). The barista wore a pin in support of unionization. Her store is now one of nearly 100 Starbucks locations across more than two dozen states that are trying to unionize after two Buffalo-area Starbucks voted in December to form the company’s first unions with Workers United, an SEIU affiliate. The nearly 100 workers on the retail side of the Seattle Roastery, which reportedly cost more than $20 million to build, have also petitioned for a union election. For Starbucks, it’s an awkward development at the store Schultz once called a “metaphor for the whole company.”

The New York Roastery is now one of nearly 100 Starbucks locations across more than two dozen states that are trying to unionize.

Starbucks’ flagship stores are designed to get people to spend far more money than they normally would at a coffee shop. That money can be spent at multiple coffee bars, an outpost of a Milan bakery, and a cocktail bar where a pistachio buttered rum drink costs $23. It can also be used to buy limited-edition Chemex coffeemakers decorated by New York artists ($100), a coffee flight gift set that includes a “passport” for recording tasting notes ($56 and up), and a hat that reads “no sleep city” ($59.95.)

Many Starbucks workers were initially excited to be at the new stores. Melissa Slabaugh, a barista and mixologist who has been with the company for almost nine years, transferred to the Seattle Roastery from a Tucson, Arizona, store four years ago. The Roastery had internal prestige and was attracting some of the company’s best baristas. International tourists came in on tour buses, and a production of Hamilton bought out the store for a cast party.

Her perspective shifted during the pandemic, when the Seattle Roastery ran on skeleton crews as colleagues got sick with Covid-19 and managers refused to reduce the store’s hours. She internalized how degrading it could be to hold one of the supposedly low-skilled positions that lead to being treated as dispensable. Then there’s the perennial frustration of working as a bartender at a place where customers are not allowed to tip via credit card. Sam LaGow was similarly excited to join the New York Roastery after a few years at a Starbucks off Union Square. The labor shortages and other stresses of working in food service during a pandemic got to him, too.

But for both, the idea of forming a union seemed impossible. Buffalo changed that. LaGow started seeing how unions could protect service workers, not just people in industries like construction. Slabaugh realized unions weren’t reserved for people like her mom, a teacher. Their colleagues, who skew young and left, were quickly coming to the same conclusion.

The idea of forming a union seemed impossible. Buffalo changed that.

New York was unusual in that the roasting team, which works under a different corporate umbrella, also petitioned for a union election. It’s the first sign of the unionization wave reaching Starbucks’ manufacturing operations. One of the manufacturing workers, who asked to remain anonymous because they fear retaliation, told me there’s unanimous support for the union among the roasters in New York. (Neither side of the Chicago Roastery, the company’s third US flagship store, has tried to unionize.)

LaGow hasn’t been surprised to see the company take a hard line against unionization, including hiring dozens of lawyers from a notorious union-busting law firm, setting up an anti-union website, and firing seven workers who were organizing their Memphis store. “They will have Starbucks-branded pronoun pins for us to wear,” LaGow says. “But the second someone starts saying the U-word, [Executive Vice President] Rosann Williams flies into Buffalo.” (In a similar vein, REI’s CEO recently took the time to share his pronouns and acknowledge his presence on native land before trying to stop the union drive at his SoHo store.)

Within the New York Roastery, LaGow says something of a cold war has developed between workers and the managers. He wants the vote to happen quickly so they can move on to bargaining to improve conditions—something he thinks will end up benefiting managers, as well. Starbucks, on the other hand, has been using its lawyers to try to delay elections while they ramp up the union-busting campaign. Another piece of that effort will be a new senior communications manager tasked with showing that Starbucks is a “different type of company,” presumably the kind of company where workers don’t need a union. A Starbucks spokesperson said in a statement, “We’ve been clear in our belief that we are better together as partners, without a union between us, and that conviction has not changed.”

Miguel Pérez-Glassner, who joined the New York Roastery in October, says some people he knows have been surprised to hear that he’s unionizing since Starbucks is known for things like having good health care benefits. The workers I spoke to know they’re not the worst-off service workers. They just reject the premise that that makes a union unnecessary. While they do have specific demands like better pay, their broader goal is to have democracy in the workplace so that they can do things like help determine how their stores respond to additional Covid waves. “We’re not trying to destroy Starbucks,” explains Pérez-Glassner. “We want to have our voice at the table.”

“We’re not trying to destroy Starbucks. We want to have our voice at the table.”

So far, the vast majority of Starbucks’ 9,000 locations have not yet petitioned for union elections. LaGow says he’s talked with workers at smaller New York stores who want to see what happens at the New York Roastery. He and his colleagues have asked the National Labor Relations Board to let them vote on March 3, but expect the election to be delayed by motions from Starbucks’ lawyers.

Losses at the flagship stores would be particularly embarrassing for the company. Schultz portrayed them as a key part of his legacy when he stepped down as chairman in 2018. A plaque at the New York store states that “no detail was too small” when the company dreamed of creating a “extraordinary place to capture all our passion and ambition.”

This isn’t just PR for customers and investors. Peréz-Glassner says employees get a similar spiel about working in a Willy Wonka-esque wonderland during onboarding, as well. They don’t, however, get a refresher course on the book that introduced Wonka to the world, Roald Dahl’s 1964 classic Charlie and the Chocolate Factory.

The original edition begins with Wonka summarily firing his entire workforce because a few of them are corporate spies. Determined not to be spied on again, Wonka travels to the “very deepest and darkest part of the African jungle” to recruit pygmies desperate for cocoa beans. After they agree to live and work in his factory in exchange for an unlimited supply, Wonka smuggles them across borders in wooden crates. Then they labor happily ever after.

Under pressure from civil rights leaders, Dahl revised the book in 1974, making the Oompa Loompas cute, white creatures from a place called Loompaland. It became the type of story that a billionaire like Schultz could easily get behind.