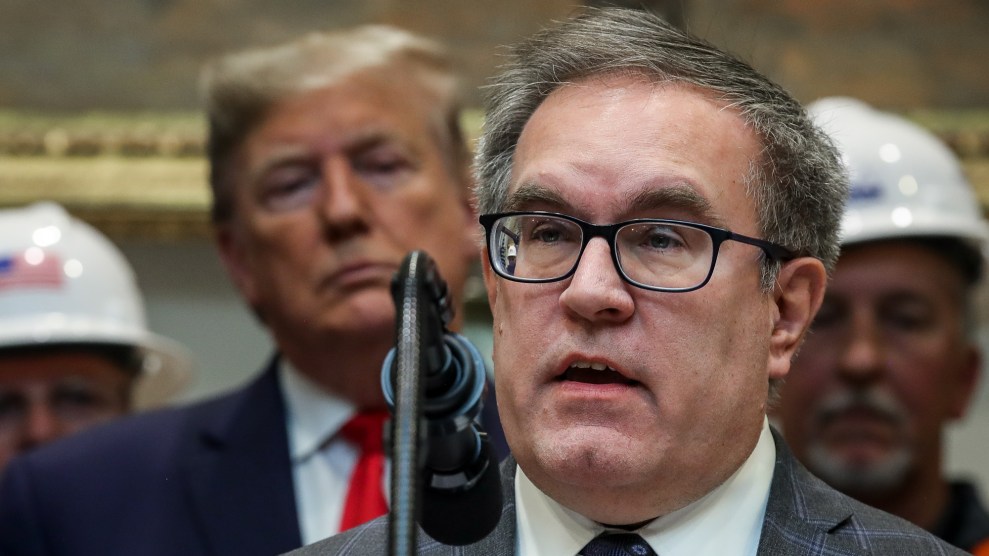 This story was originally published by Huffpost and is reproduced here as part of the Climate Desk collaboration.

But, as The Virginian-Pilot reported, it may not be the end of the line for Wheeler’s nomination. His name could ultimately be added back to the resolution on the Senate floor. All it would take is a single Democrat in the narrowly divided state Senate voting with Republicans.

Tuesday’s vote adds to what has proved to be a contentious confirmation process, in which scores of current and former EPA employees urged Virginia lawmakers to vote against Wheeler, citing his record of gutting environmental rules while at the helm of the federal agency.

“Governor Youngkin has said time and time again he would like to bridge the partisan divide and work together for Virginia’s next generation,” Locke said in a statement following the vote. “However, his choice of Trump alum Andrew Wheeler for the position of Secretary of Natural Resources proves his unwillingness to bring properly qualified officials into our government.”

Youngkin tapped Wheeler to serve as his secretary of natural resources in January and, in the face of mounting public pressure, maintained he was “the most qualified person for this job.”

Democrats, who hold a 21-19 majority in the state Senate, signaled last week that they were united in their opposition and had the votes to sink Wheeler’s nomination. But one member of the party, Sen. Joseph D. Morrissey, revived what seemed like a doomed nomination, telling the Washington Post after Wheeler’s appearance before a Senate committee last week that he was “very much open” to confirming Youngkin’s Cabinet pick.

At that hearing, Wheeler defended his legacy and said he’d become a lightning rod because the press did not cover “positive things” during his tenure. He also blamed Congress for his own inaction on climate change, arguing he was “dealt a very limited hand” to confront the global threat since Congress hasn’t passed more stringent laws to curb greenhouse gas emissions.

After listening to Wheeler’s testimony, Morrissey told the former EPA chief that he was “very articulate and persuasive.”

In response to mounting criticism, more than 130 of Wheeler’s former colleagues at EPA and elsewhere sent their own letter defending his record and dismissing previous letters as “highly biased and unsupported.”

In a statement following Tuesday’s vote, Youngkin spokeswoman Macaulay Porter said the governor “is disappointed that the committee put partisan politics over the selection of an experienced public servant who would prioritize cleaning up the Chesapeake Bay and James River.”