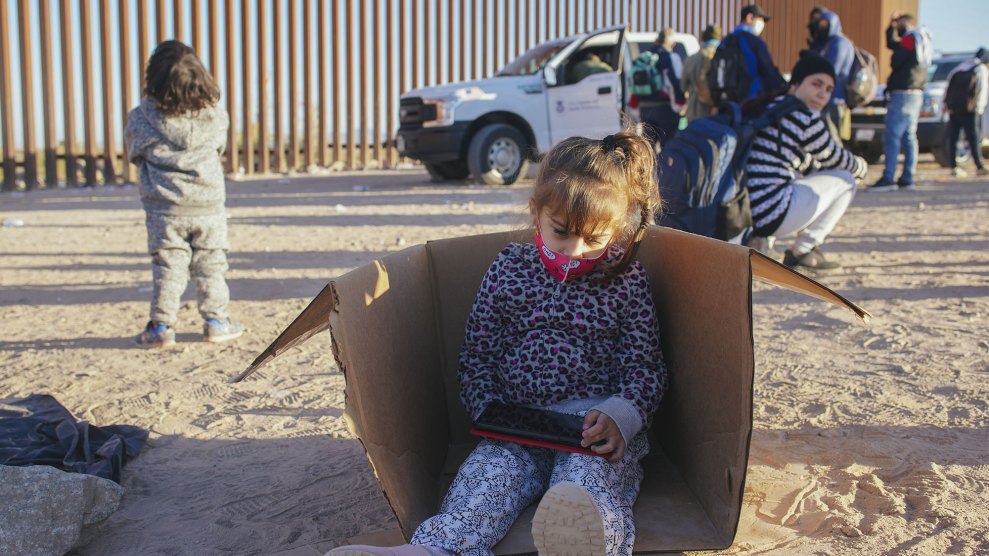 More than a year has passed since President Biden decided to continue enforcing a Trump-era border closure policy that claimed the pandemic was reason to turn migrants and asylum seekers back without proper screenings. Title 42, as the policy is known, is now very much a Biden policy—and like other high-ranking Democrats and immigrant rights activists, Senate Majority Leader Chuck Schumer (D-NY) says it’s on Biden to end it: “Now is the time to stop the madness.”

“Title 42 has been nothing short of disastrous for immigrant families seeking asylum from the horrors in their home countries,” Schumer told reporters during a call Thursday. “We shouldn’t forget how this policy originated: It was a cynical effort by the Trump administration to use the pandemic as justification for expelling vulnerable migrants seeking refuge in this country. And now more than a year since the Biden administration took office, it’s unacceptable that this policy continues to be used indiscriminately to remove migrants with valid refugee claims.”

Immigration advocates have recently been critical of how the US is calling for the humane treatment of Ukrainian refugees, and at the same time turning back mostly Black and Brown asylum seekers at its own southern border. And while Title 42 has affected mostly for migrants of color, just this week a Ukrainian woman and her three children tried to request asylum at the US-Mexico border, only to be turned away because of Title 42.

Schumer’s call for halting Title 42, which was joined by Sen. Bob Menendez (D-NJ) and Rep. Nanette Diaz Barragán (D-CA), as well as several advocates and lawyers, comes at something of a crossroads for the policy. Last Friday, two federal judges issued conflicting rulings that show just how “legally dubious” the policy is, Menendez said on the call Thursday. First, the DC Circuit Court of Appeals ruled that under Title 42, the government can’t send migrant families back to countries where they could face harm. Hours later, a Trump-appointed judge in Texas ruled that excluding unaccompanied migrant children from this policy was illegal. This second decision meant that the Biden administration would have to start also quickly expelling children and teens migrating without adult relatives.

The Biden administration could appeal the Texas ruling, and ACLU attorney Lee Gelernt said Thursday he had assumed they would have appealed by now. “We are urging them not to accept that ruling,” he said. Turning away unaccompanied children and teens puts them in enormous danger in Mexican border cities where migrants and asylum seekers have been victims of kidnapping, torture, rape, extortion, and murder. Biden could end the court fights if he were to just “simply end Title 42,” an “inhumane” policy, Gelernt said.

In the early months of the pandemic when Trump first enacted Title 42, unaccompanied children were not exempt, and Maria Odom, senior vice president for legal programs at Kids in Need of Defense (KIND), saw fist hand “the sheer chaos that ensued during that time and the grave threatening consequences for those children.” She said Thursday that knowing this action could resume in a couple of days is alarming.

A key point in much of the pushback against Biden’s continued use of Title 42 is that things with the pandemic look incredibly different now as compared to when the obscure rule was first used in March 2020: Back then, testing was scarce, masks were hard to find, the vaccines were a hopeful thought, and we knew little about the virus. Today, the message from the White House is that we can go back to almost pre-pandemic life—except at the border.

“It is far passed time to restore access to legal and life saving asylum at our border,” Menendez said.

But the Biden administration hasn’t just continued implementing Title 42, it has even defended the policy in court despite knowing that health conditions continue to evolve, and even as health care experts question its efficacy and call for its end.  As I wrote after a January court hearing, the hypocrisy of keeping the border closed only to migrants was not lost on its opponents:

ACLU lead attorney Lee Gelernt, who represents the refuge-seeking migrant families suing the US government, argued that the people affected by Title 42 expulsions make up only 0.01 percent of the traffic coming in from Mexico—and that the other 99.9 percent is able to come and go between the two countries even as the pandemic continues. All ports of entry have been opened for travelers and tourists, and air travel between the two countries continues unrestricted. So, it’s hard not to ask: What makes this small percentage more of a risk to US residents than travelers with visas and US passports?

Beyond being cruel, it’s also important to remember that Title 42 is dangerous. It has played a role in the high number of border crossings reported by US Customs and Border Protection because many migrants who are quickly expelled try to cross again; some do it in more remote areas to avoid being caught, which has contributed to more rescues of migrants in distress, and more deaths along the border. KIND’s Odom said she is deeply concerned that because of Title 42, unaccompanied minors are risking their lives trying to cross unnoticed, and are getting lost in the desert.

As for what’s next, the Biden administration has until Friday night to appeal the unaccompanied migrant order. The administration could also end Title 42 altogether. Menendez said Thursday that while he has spoken to administration officials about Title 42, he has not spoken to Biden directly. He said he has requested a meeting with the president to speak about immigration more broadly, and if Title 42 is “still alive,” Menendez will urge Biden to end it.