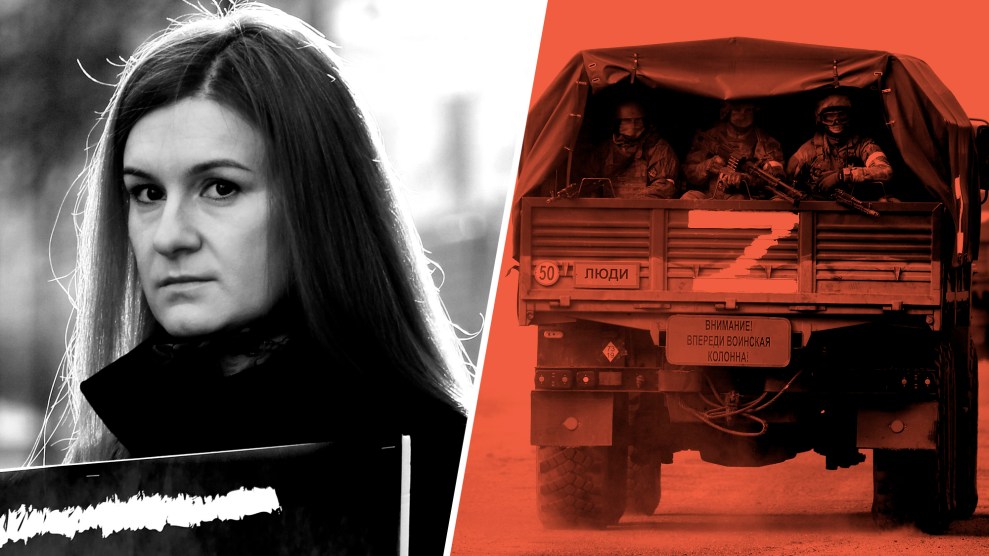 Four days into the Russian invasion of Ukraine, the political arm of the National Rifle Association published an article praising a “valiant” Ukranian army and resistance from “ordinary Ukrainians taking up arms to defend their country and communities.” Since early February, the gun lobbying group had used the coming war as an opportunity to talk up gun rights. “What is happening in Ukraine proves the wisdom of our founding fathers in drafting the Second Amendment,” the NRA now reiterated as the bloodshed grew, a right essential to “preserving human dignity, self-destiny and freedom.”

Forgotten in the face of Vladimir Putin’s barbaric attack, it seems, were the cozy ties between top NRA officials and convicted Russian agent Maria Butina. The Kremlin operative didn’t just commit conspiracy against the United States—she also worked on behalf of Putin’s military conquest in the Ukraine region during the same period she was forging alliances, both in the US and in Moscow, with NRA leaders.

Butina is best known for infiltrating the Republican Party and seeking to influence the 2016 election in favor of Donald Trump. She cultivated relationships among the conservative movement alongside her boss, Alexander Torshin, a high-level official from Putin’s party who donated to the NRA as a “life member” and later was sanctioned by the US government. After Butina’s downfall, the NRA sought to distance itself and claimed it had no knowledge of Butina’s foreign activities. But as I and my colleague Hannah Levintova reported in a 2019 investigation, while Butina was spending time with NRA leaders David Keene, Wayne LaPierre and others, information publicly available on social media and from other sources made clear that Butina was aggressively working against US national security interests:

Mother Jones has uncovered a trail of activity showing that during the same period when top NRA leaders welcomed Butina into the fold—meeting with her extensively in Moscow and the United States—Butina actively supported Russian President Vladimir Putin’s military takeover of Crimea. In the immediate aftermath of the invasion and annexation in March 2014, Butina denounced retaliatory sanctions by the Obama administration and traveled to Crimea to promote the arming of pro-Russian separatists. Her efforts there included pledging support to a leader of a militia group that violently seized a Crimean news outlet it deemed “pro-American” and swiftly repurposed for a Kremlin propaganda operation.

After serving most of an 18-month federal prison sentence, Butina was deported to her native country in October 2019. Putin personally defended Butina, declaring that the US had “nothing on her” and had convicted her “in order not to look totally stupid.” By last fall, at age 33, she began serving in the Russian parliament as a member of Putin’s United Russia party.

Last week, Butina posted video of herself on social media in which she penned a white “Z” on her jacket lapel to show her support for Russian troops invading Ukraine. The Z has become a prominent pro-war symbol, after appearing on Russian tanks and armored vehicles as they massed along Ukraine’s border.

“Work, brothers,” Butina said in Russian, pointing directly into the camera. “We are with you always.”

Just another day in the life of Maria Butina:

Drawing a white "Z" marking on your lapel to show solidarity with the invasion of Ukraine pic.twitter.com/raYG3kRznT

The war now raging in Ukraine continues the Russian expansionism that Butina has long openly supported on behalf of the Kremlin. As we previously reported:

On March 17, 2014, after Putin sent in troops and used an illegal referendum to declare Crimea part of the Russian Federation, President Barack Obama announced sanctions in response, including against entities operating in the Russian arms sector. That same day, Butina posted a lengthy commentary online warning that the Obama sanctions would “bankrupt the Russian arms industry,” calling them “a direct threat to national security.” She soon announced plans to travel to Crimea the following week to establish offices for her group there and advise local citizens on arming themselves under Russian law.

There, Butina met with a pro-Putin group called the Crimean Front, whose “Cossack self-defense unit” recently had seized the offices of the independent Crimean Center for Investigative Journalism, using about two dozen men clad in camouflage uniforms and balaclavas. Butina held a press conference with the leader of the Crimean Front at their newly captured media headquarters, where the two spoke on camera about arming pro-Russian separatists in the region.

In a statement to Mother Jones in 2019 responding to our reporting on Butina, an attorney for the NRA said, “NRA executives were unaware of the alleged activities in question and the organization is not in a position to comment on them.”

Four weeks after Butina’s meeting with the Crimean Front, she traveled to Indianapolis for the NRA’s annual convention, where NRA executives welcomed her as a VIP. It was one of several NRA confabs Butina attended—in addition to visiting the organization’s headquarters in Virginia, hosting NRA leaders in Moscow, and joining them in a video promoting a Russian sniper rifle—prior to her arrest in 2018 by the FBI.