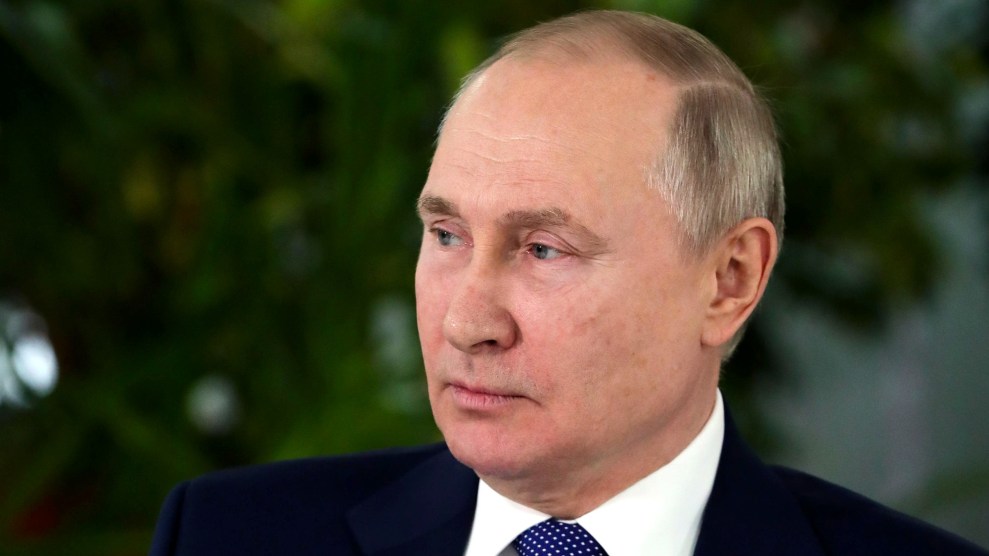 It is difficult to imagine ways for the Russian invasion of Ukraine to get worse, but Vladimir Putin is giving us new reasons to try. After putting Russian nuclear forces on “special alert” last week, Putin’s government has repeatedly accused the United States of storing biological weapons in Ukraine, part of a disinformation campaign that could presage Russia’s own use of these illegal weapons of war.

Russia signed treaties banning the use of biological and chemical weapons—in 1975 and 1997, respectively—but has maintained covert programs in apparent defiance of those agreements. Despite destroying most of its Cold War–era stockpile of chemical weapons by 2017, Russian military operatives used a nerve agent to nearly kill Sergei Skripal, a Russian spy who had become a double agent for Great Britain, and his daughter in 2018. Russia used the same nerve agent in 2020 to poison Putin opponent Aleksei Navalny. (Navalny survived but is now in a Russian prison.) During the civil war in Syria, Bashar al-Assad’s forces, which were backed by Russia, used chlorine gas, sarin, and mustard gas against rebel fighters.

Assad’s use of chemical weapons, which President Barack Obama famously said would constitute a “red line” for the United States, did not dislodge him from power, nor did it trigger US intervention. But it did lead to a massive, coordinated effort with Russia to eliminate Assad’s stockpile. Key to that initiative was a Pentagon official named Andrew Weber, who over a three-decade career in government has worked in Eurasian states like Kazakhstan and Georgia to remove nuclear material.

Weber, now a senior fellow at the Council on Strategic Risks, believes the Russian Foreign Ministry’s recent statements, including a tweet accusing the Pentagon of funding biological weapons’ development in Ukraine, are “almost a mirror image” of the disinformation tactics used in Syria, where Russia blamed Assad’s actions on the rebels. (The Berlin-based Global Public Policy Institute concluded in 2019 that Assad was responsible for 98 percent of the chemical weapons used in the Syrian Civil War with ISIS culpable for the other 2 percent.) “The audience for that is partly the Russian population as a way for them to demonize Ukrainians,” Weber notes, “and as a way to build support for the war inside Russia.”

The steady stream of Russian disinformation about the United States building bioweapons in Ukraine has sparked fears among experts that Putin is creating a pretext to deploy these weapons himself. “It’s plausible that Putin will use nuclear weapons in this conflict,” Weber told me. “I think it’s more likely that he would use chemical or biological weapons.”

Over the course of our conversation on Monday, Weber and I discussed the roots of Russia’s disinformation campaign, why chemical weapons might be one of Putin’s options in Ukraine, and how to properly assess the threat of escalation as the conflict continues.

Is there any basis to Russian Foreign Minister Sergey Lavrov’s statement at the United Nations last week that the United States was developing “biological materials” in Ukraine?

The Russian intelligence services have had a disinformation campaign for about 15 years accusing the United States of funding biological weapons laboratories in the countries surrounding Russia. It’s similar to the KGB fabrication that HIV/AIDS originated in a US military laboratory. The intent of this campaign has been to counter US influence, especially in the so-called “near abroad” of Russia [a term used by Russia to refer to its neighboring countries].

What’s changed in recent months is that it’s gone from a disinformation campaign that used journalists in Bulgaria and plants of articles and social media, to becoming the official Russian government line. Before it was just indirectly through their intelligence services that they were spreading these lies, but now it’s risen up to the official level, to the point where the 5,000-word manifesto that President Putin and President Xi released during Putin’s visit to the Olympics accuses the United States of investing in biological weapons’ laboratories all around the world.

Before it was just indirectly through their intelligence services that they were spreading these lies, but now it’s risen up to the official level.

Only yesterday, I saw the Russian Foreign Ministry tweet that it had “evidence” of a biological weapons program in Ukraine that was funded by the Pentagon.

Right, so there’s been an escalation. In the run-up to their attack on Ukraine, they started planting more articles and making more outrageous statements, including the one yesterday that says there was a campaign to destroy the evidence.

That’s not it at all. These laboratories are by and large Ukrainian Ministry of Health laboratories. They’re more or less equivalent to US county health laboratories. They played a very important role in stemming Covid. But some of these laboratories do have what we call “select agent” or dangerous pathogen collections for the legitimate purposes of tracking bacteria and viruses that are endemic in Ukraine. Out of fear of Russian military attacks, they made a decision to destroy these pathogen collections on a defensive basis, so they were not spread into the environment or stolen by the Russian invaders.

Russia’s chemical weapons stockpile was supposedly destroyed by 2017, but in recent years, they’ve used nerve agents to target dissidents or Putin rivals. Is Russia no longer in compliance with the 1993 Chemical Weapons Convention?

Russia has done this in smaller, more targeted ways. Do they have the capacity to use chemical weapons in a large-scale way in Ukraine?

Yes. For example, the perfume bottle that was recovered out of a dumpster in Salisbury [where Skripa, the British double agent, and his daughter were poisoned] contained over 10,000 lethal doses of Novichok chemical weapons. They could use one or two operatives to deliver a much larger scale attack with chemical weapons, but they can also deliver biological weapons. Biological weapons are just diseases so it takes maybe four to 10 days for most biological weapons to begin to impact the targets as the onset of disease starts. So they’re easier to get away with in terms of, you know, not getting caught upon release.

I’m concerned that the reason we’re seeing this escalation and propaganda directed at the United States and making false accusations that Ukraine has biological weapons is because that will be a cover for the Russian military’s use of these weapons, and then a false flag operation where they will try to blame it on on Ukraine.

Why would Putin even feel the need to use chemical or biological weapons, given Russia’s incredible conventional military advantage over Ukraine?

In our Western logic, it makes absolutely no sense. But if we look at what the Assad regime did in Syria with chemical weapons, clearly, they see value in inflicting terror on the population. And biological weapons can do that. Chemical weapons can do that by demoralizing the resistance, and also, tactically, for clearing buildings in urban environments. So they saw both a military and psychological warfare utility in employing these terror weapons, specifically, because they cause so much terror in the target population. And if they can blame it on the United States and Ukraine, that’s just gravy.

This conversation was edited for length and clarity.

Correction: An earlier version of this story misstated the extent of Sergei Skripal and his daughter Yulia’s poisoning.