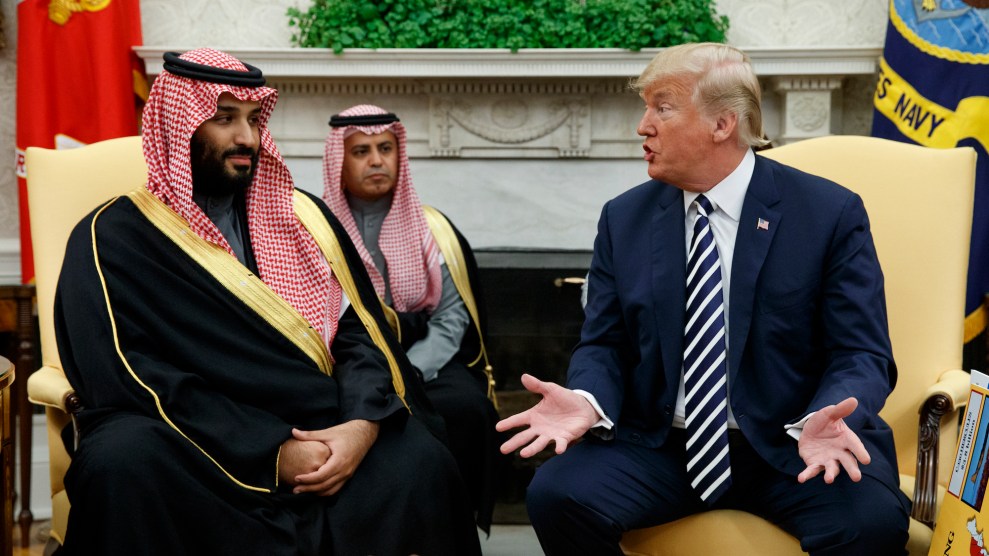 Donald Trump’s golf business has long been his pride and joy. An obsessive golfer, he owns or operates at least a dozen courses, and long before he became president, he sank hundreds of millions into building or acquiring some of the sport’s most prominent properties. But as his political career turned increasingly toxic, even the conservative world of professional golf—which strives to avoid any sort of controversy—has shied away from Trump. Following the January 6 attack on the Capitol, the PGA announced it was pulling the PGA Championship from Trumps’ Bedminster, NJ, course. Simultaneously, the Royal & Ancient Golf Club of St. Andrews—one of golf’s most prestigious organizations—declared that it would never bring the British Open to either of his Scottish courses.

For Trump it was a giant blow, both to his ego and commercially, since a course’s regular inclusion in professional golf tours brings in revenue and plenty of free advertising. But Trump has a new best friend in the golf world, an organization that is very happy to validate him and lavish his resorts with money and televised attention. Actually, it’s an old friend: the government of Saudi Arabia.

The Kingdom of Saudi Arabia, through its sovereign wealth fund, is investing heavily in developing a new professional golf league, the LIV Golf Invitational Series, meant to compete with the PGA. The one big problem, however, is that almost no one wants anything to do with it. Last fall, after the league’s creation, professional golfer Phil Mickelson mused publicly about why he would even consider joining a Saudi-backed professional golf league.

“We know they killed [Washington Post journalist Jamal] Khashoggi and have a horrible record on human rights. They execute people over there for being gay,” Mickelson told an interviewer. “Knowing all of this, why would I even consider it? Because this is a once-in-a-lifetime opportunity to reshape how the PGA Tour operates.”

Nearly every other big-name professional golfer rushed to distance themselves—despite the new league’s reported plans to pay players tens of millions of dollars. In the words of golfer Rory McElroy, the idea was “dead in the water.”

But the Saudi-backed operation has plowed ahead, and on Wednesday LIV announced it had identified eight golf courses that would be willing to host tournaments, which would offer as much as $255 million in prizes. Trump’s Bedminster golf course is one of the eight. It’s not guaranteed to get a good reception—the PGA has threatened to suspend any golfer who participates in one of the rival league’s tournaments—and Trump’s Doral golf course in Florida lost a smaller PGA tournament during the 2016 presidential campaign, after no title sponsor could be found. (The tournament moved to Mexico.)

Still, it’s a rare bit of good news for Trump’s golf business, which has suffered since he ran for president. Aside from the effects of Covid-19, which ravaged the international golfing industry, Trump has seen troubles mount at his various courses. In 2019, it was reported that his Doral course had a 265-person waiting list to give up membership (members get some of their fees returned when they leave, but can only be paid when new members join), and presidential financial disclosure reports show that the course’s revenues slid precipitously during his time in office. In Scotland, where Trump has invested hundreds of millions of dollars and essentially staked his business empire’s future financial stability, his two golf courses continue to hemorrhage money. His golf resort in Ireland hasn’t fared much better. Following the Capitol insurrection, New York City moved to terminate Trump’s management of a city-owned golf course—although this fall, a judge barred the city from removing Trump’s name without paying him first.

Trump has a long history with Saudi investment. In 2015, he bragged during a campaign appearance about his business dealings with the Saudis. “Saudi Arabia, I get along with all of them,” Trump said. “They buy apartments from me. They spend $40 million, $50 million. Am I supposed to dislike them? I like them very much.” And shortly before his run, Trump aggressively pursued a deal to build hotels in Jeddah, the gateway city to Islam’s holiest cities of Mecca and Medina—a deal which likely needed the blessing of senior members of the Saudi royal family to even be considered.

If the new golf league gives his Bedminster course a boost in business, it wouldn’t be the first time in recent years Trump has gotten a friendly helping hand from the Saudi government. According to the Washington Post, a visit by Saudi crown prince Mohammed Bin Salman during Trump’s presidency directly bolstered the bottom line of one of Trump’s New York hotels.