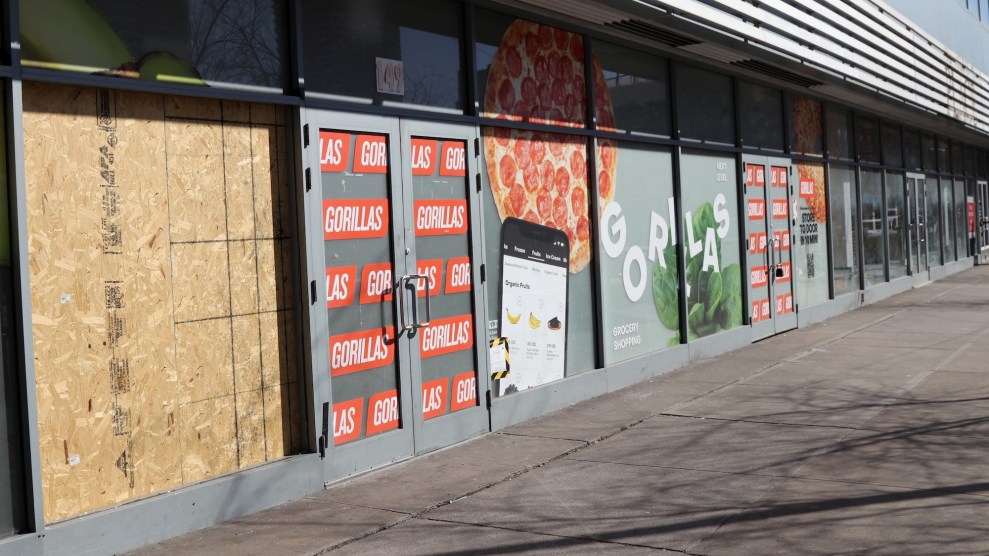 The tech world's idea of a bodega: A covered up storefront where workers do the shopping.G. Ronald Lopez/ZUMA

You live in San Francisco and don’t want to go outside, but the shelves are bare. No milk. No Katz’s pastrami. No $50 king cake kit. Not a problem. You can open an app called Popcorn and order all of the above. Within ten minutes, a van should show up at your door. Its side is emblazoned with Popcorn’s slogan: “Faster than 911.”

I think it’s supposed to be funny that you could get your toilet paper faster than some other unlucky soul gets his defibrillator. But it reads like dystopian pulp. Are we really so resigned to the failure of our critical infrastructure? And so desperate to fulfill our desire for snacks? This is the kind of humor that appears when things are so broken the only solace is dark laughter.

Popcorn is one of the too-many-to-count rapid delivery apps sprouting up in major American and European cities. There’s Buyk, Fridge No More, Getir, GoPuff, Gorillas, Jokr, and now DashMarts from DoorDash. All of them promise to get you things in some vanishingly small number of minutes. They tend offer what a corner store would stock if a millennial MBA in a Patagonia vest was in charge of inventory.

I think it’s supposed to be funny that you could get your toilet paper faster than some other unlucky soul gets his defibrillator. But it reads like dystopian pulp.

Like corner stores, they are usually right in the neighborhood. Unlike corner stores, you can’t go inside and buy anything. The windows at these so-called “dark stores” tend to be covered over and, unless you see a worker leaving to make a delivery, you might mistake them for vacant storefronts. They are a way of suburbanizing the city by further removing the need for a certain class of people to interact with their neighbors.

The practice of turning retail space into warehouses is often in obvious violation of local zoning rules. But the 15-minute delivery apps appear to be comfortable breaking the rules and then buying their way out of whatever problems arise. It’s a strategy that rideshare companies employed to great effect when they spent more than $200 million in 2020 to pass a California ballot measure that exempted their workers from longstanding labor laws. Gorillas is already trying to avoid a potential crackdown in New York by adding an in-store pickup option.

Also like Uber and Lyft, the disruption sought by these delivery companies has turned out to be a massively unprofitable enterprise dependent on subsidies from venture capital. The Wall Street Journal reported in January that some rapid delivery companies are losing more than $20 per order. After including advertising costs, Fridge No More was losing $78 per customer, according to an investor presentation. It now claims to be losing less money but has not said by how much. One competitor, 1520, has already gone out of business. For the ones that remain, there is the hope of an initial public offering that will let founders and VC firms earn back their investments many times over, even if the companies they launched never ever end up making money.

The losses shouldn’t come as a shock. The delivery companies have been running aggressive marketing campaigns that provide new customers with free orders of $25 or more in the hopes that they’ll keep using the service afterward. One New Yorker told the Journal he’d gotten $400 of free groceries by taking advantage of these deals. He hadn’t paid for toilet paper, paper towels, and hand soap since moving to the city last year. There are at least some benefits of the current wave of failson capitalism.

The decision by VC firms to sink billions of dollars into these companies is leading to thousands of people being put to work in low-paying jobs delivering something someone else could easily go out and buy themselves. Unlike Uber and Lyft, which classify drivers as independent contractors, many of the delivery companies are bringing workers on as employees, meaning they’re provided health care and other benefits. The fact that a company deciding not to blatantly evade labor laws is considered a minor victory is a sign of how far expectations have fallen. Classification status aside, a more functional society would put the human capital being expended on rapid delivery into, for example, building new infrastructure. But you can’t IPO a bridge and Congress is missing in action, so people get floss delivered while sitting at home in sweatpants.

Popcorn is one of the newer entrants to the rapid delivery market. Its co-founder Onur Kardeşler previously helped start a company called Firefly. On LinkedIn, Kardeşler describes Firefly as being on a “mission is to build smarter, connected, and informed cities.” How does it do that? By putting digital billboards on top of taxis and rideshare vehicles.

The saddest part of Popcorn’s slogan is that there’s some truth to it. The Bay Area has, at least on paper, created wealth more quickly than just about any place in human history. San Francisco alone is now home to 81 billionaires, roughly one-tenth of all the billionaires in the United States.

Yet last year, the San Francisco Chronicle reported that a shortage of ambulances in the city was creating backlogs of up to six calls deep. There had been no increase in ambulance personnel since 2015 despite a 16 percent increase in medical calls.

Sam Gebler told the paper that he was often the only paramedic covering three of the city’s 44 fire engine companies. He described a June day where he waited 30 minutes for an ambulance while he stabilized an elderly patient with severe symptoms and a history of cancer. A few months later, Popcorn managed to get a customer two Pellegrinos, two other drinks, a toothbrush, and toothpaste in ten minutes. In other words, yes, faster than 911.