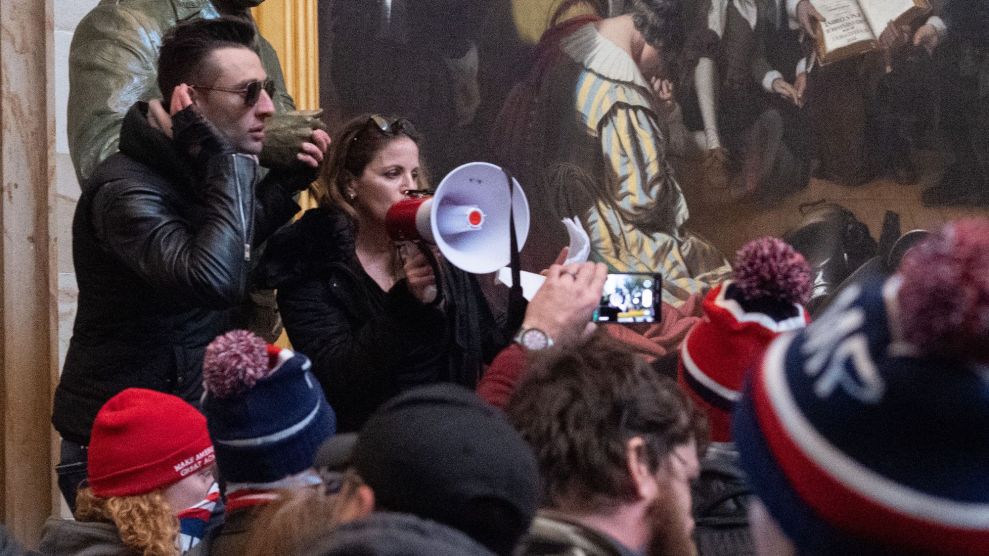 Dr. Simone Gold and John Strand from America's Frontline Doctors, in the US Capitol Rotunda on January 6, 2021, in Washington, DC. Saul Loeb/AFP via Getty Images

After Dr. Simone Gold, the Beverly Hills anti-vaccine activist and founder of America’s Frontline Doctors, was arrested last year for participating in the January 6 insurrection at the US Capitol, she was defiant. She claimed she was simply exercising her free speech rights and even made a dramatic video portraying herself as a victim of political persecution. Even after being arrested, she has spent the last year on the right-wing media circuit and speaking at political conferences denouncing vaccines and pushing dubious Covid cures. That’s why, of the more than 725 people charged with crimes related to the Capitol insurrection, Gold seemed like one of the most likely to hold out and go to trial, where she would relish the forum to further promote her views.

But on Thursday, she dropped the defiance, agreeing to plead guilty to a single misdemeanor charge of unlawfully entering and remaining in a restricted area of the US Capitol.

During her plea hearing, Gold, who had also been facing a felony obstruction charge, did not sound like the outspoken activist she’s been in right-wing media over the past year. She was clearly unhappy and sounded on the verge of tears when she was forced to speak the words, “I plead guilty.” However, at the beginning of the hearing, she did manage to pipe up to correct US District Court Judge Christopher Cooper, who had addressed her as “Ms. Gold.” Never one to let people forget about her elite educational background, she informed the judge, “I never go by Ms. Gold. I always go by Dr. Gold.”

While Gold has characterized her involvement at the Capitol as part of a peaceful protest, the FBI said otherwise. According to court filings, she and John Strand, an international underwear model who works for America’s Frontline Doctors, were photographed “in a large crowd attempting to push past multiple officers blocking the entrance to the Capitol, which had visibly broken windows at the time. One of the officers, who had been pinned near the doors to the Capitol, appears to be pulled down by someone in the crowd and lands near where Strand and Gold were standing.” Videos and still photos also show the pair pressed up against the door to the House chamber where law enforcement was trying to block them.

As I explained in this profile last year, Gold stood out from many of the other insurrectionists from the beginning because after pushing her way into the Capitol, she picked up a bullhorn and gave a speech in the rotunda, where she announced, “I am a Stanford-educated attorney!” She was among a large number of white, well-educated and affluent professionals who were among the rioters at the Capitol on Jan. 6, but apparently the only Stanford- educated lawyer and doctor. And she never denied being there, even admitting to the Washington Post not long after the event that she had a few regrets about it.

Gold, an emergency room doctor, first started to make headlines in 2020, when she launched herself onto the right-wing media circuit with Twitter videos of herself standing in front of a California hospital during the pandemic lockdown and claiming that despite all the panic about covid-19, the emergency room was empty. But what really made her a star was video from a “white coat” doctors’ summit in July 2020, where she appeared on the steps of the Supreme Court with other members of America’s Frontline Doctors to denounce “medical cancel culture,” promote hydroxychloroquine as a covid cure, and spread other misinformation about the virus. Among those in the video was Stella Immanuel, a Houston doctor who famously believes that some gynecological problems are caused by having sex with demons. “You don’t need masks. There is a cure,” Immanuel said. “Nobody needs to get sick.”

President Trump and his son Don Jr. retweeted a video of the event and it went viral, receiving more than 16 million views in a matter of hours before Facebook, YouTube, and Twitter took it down for spreading misinformation. Twitter even blocked Don Jr. from using his account for most of the day. Gold, now a victim of Big Tech censorship, was suddenly a Fox News star and catapulted into the right-wing ecosystem.

While she has been out on bond, Gold continued her anti-vaccine crusade. But her message has not aged well, nor has her medical advice. One of her most vocal benefactors, Daystar TV televangelist Marcus Lamb, who raised money for her on his show and hosted her numerous times to air her anti-vaccine views, died, unvaccinated, from covid in December. In October, a House subcommittee launched an investigation into her telemedicine company her group started for allegedly profiting from pushing prescription drugs that are useless for covid such as hydroxychloroquine. Members of Congress asked the Federal Trade Commission to open an investigation as well. The California medical board has been under pressure to take action against her medical license. (Now that she’s pleaded guilty to a crime, she’s also at risk of being disbarred in New York State, where she’s licensed to practice law.)

Martyrdom may not be so profitable after all, which might explain why Gold has finally decided to throw in the towel and take a plea. At the hearing Thursday, she agreed to pay $500 in restitution and to fully cooperate in the ongoing investigation into the events of January 6 at the Capitol. Cooper will sentence her on June 16, after the probation office finishes its investigation into her case and makes a recommendation. Based on the sentencing guidelines, she likely faces between zero and six months of jail time, though as the judge informed her Thursday, he could decide to give her a stiffer sentence. Now that she’s pleaded guilty, Gold would have to accept it.