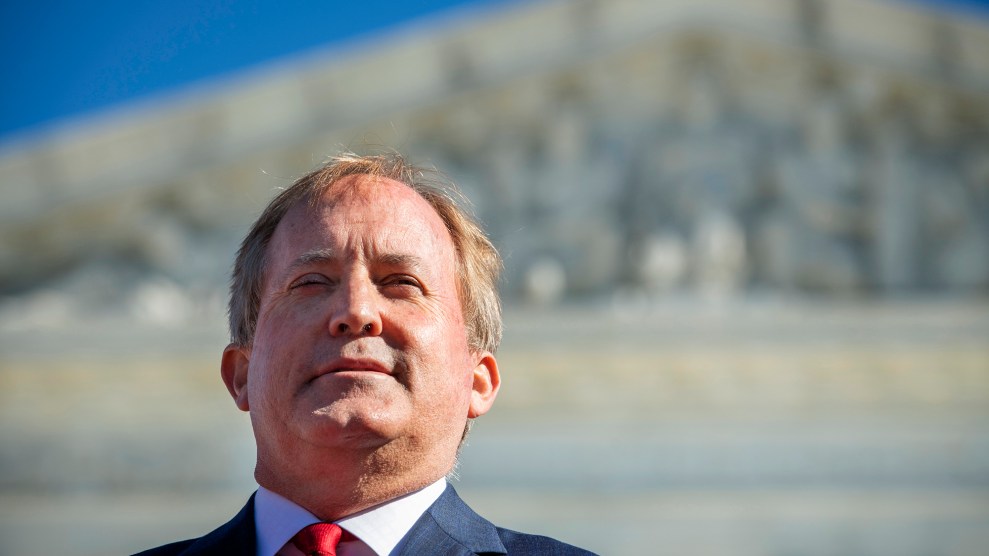 November 1, 2021, Washington, District of Columbia, USA: Ken Paxton, Texas attorney general, offers remarks outside in front of the Supreme Court of the United States in Washington, DC, Monday, November 1, 2021. The Supreme Court of the United States agreed to review a controversial Texas abortion law but refused to block the law while it examines the state's unusual enforcement scheme and whether the Department of Justice has the right to sue to block the law (Credit Image: © Rod Lamkey/CNP via ZUMA Press Wire)Rod Lamkey/CNP via ZUMA Press Wire

Texas Attorney General Ken Paxton fell short of the 50-percent threshold needed to win his Republican primary outright on Tuesday, but he comfortably advanced to the May runoff against George P. Bush, the state land commissioner and nephew of the 43rd president.

As I reported in a profile of the AG earlier this year, Paxton is swimming in the sort of scandals that typically end political careers. He has been under indictment for securities fraud since his first year in office, and he was the subject of a formal whistleblower complaint from a number of high-ranking former staffers who accused him of using his office to do favors for a real estate mogul who had hired a woman with whom Paxton had allegedly been having a lengthy affair. His lawsuit to throw out the electoral votes of four Biden-won states was so outlandish that it triggered an ethics investigation by the State Bar of Texas. The FBI has reportedly been circling. Paxton lost major donors and faced a primary challenge from a number of notable conservatives—Bush; Eva Guzman, a former justice of the state supreme court; and Rep. Louie Gohmert, of whom the less said the better.

But despite all that, Paxton has continued to wield real power in state politics, in ways that have rippled out to the rest of the country. His office defended the Texas law that effectively circumvented Roe v. Wade. It led the legal fight to restore the Trump administration’s “Remain in Mexico” policy. It’s fought climate-change standards. And most recently, his office drafted a legal opinion stating that gender-affirming care should be investigated as child abuse. In some ways, his cynicism makes him a perfect avatar for Trump-era conservatism:

Paxton’s persistence in the face of endless scandal makes him a model apparatchik for the current moment. He will never be president, but in a golden age of Republican corruption, in which anyone with ambition must bend the knee to an aspiring autocrat, a warm body with nothing to lose can do a lot of damage. By laundering the theories of conspiracists and hacks, he did as much as anyone short of Trump to make the Big Lie the new party orthodoxy. And in the process, he held a black light up to the rest of the conservative legal movement—the institutions and officials and donors who have turned jobs like his into some of the most powerful in state politics, and the compromises they’ve made to do it. There are a lot of Ken Paxtons out there, it turns out, and they were all just waiting to fall in line.

Paxton’s weaknesses were on display in the primary. Gohmert carried most of his East Texas congressional district; Bush, who touts his endorsement from the Border Patrol union, showed strength in the Rio Grande Valley; and Paxton failed to win a majority even in his home turf of suburban Collin County. But so long as cynicism pays, you’d be a fool to count him out.