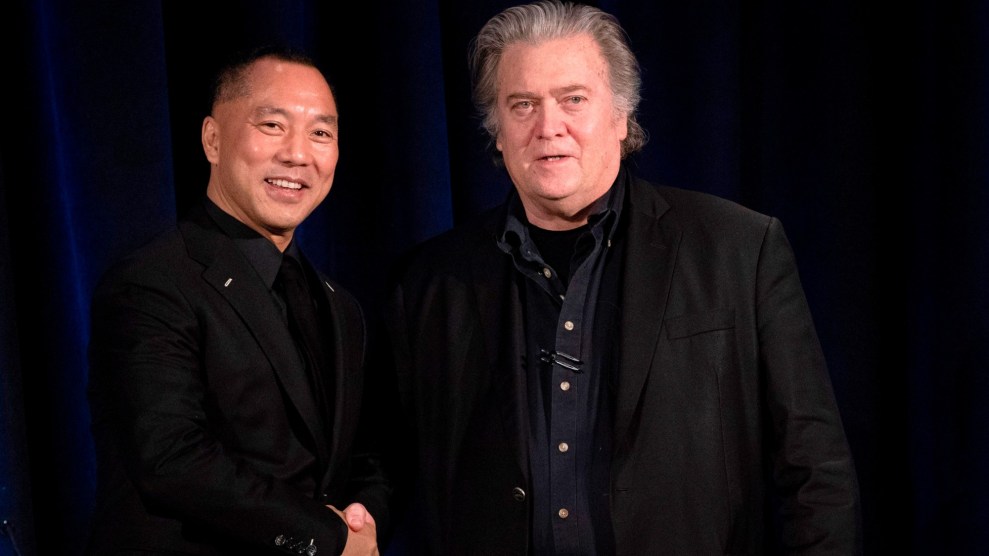 “Dear comrades in arms, GTV has been completely shut down at 12:00 in the morning yesterday,” Guo announced Thursday on Gettr, the social media app he has also funded. Guo, who has cultivated an image as a foe of the Chinese Communist Party, blamed the company’s closure on data tampering by “the Communist Party.” (Mother Jones translated his comments, which were originally in Chinese.)

But the shuttering of the site, which featured hours-long daily videos of Guo and translated versions of Bannon’s War Room podcast, came weeks after Guo filed for bankruptcy in the wake of a court ruling ordering him to pay about $250 million to a creditor suing him for breach of contract. And that ruling was just his latest legal setback. In September, the Securities and Exchange Commission charged GTV with conducting an illegal stock offering and ordered it and a parent company to pay more than $450 million to compensate investors. Dozens of investors in GTV, almost all Chinese speakers, have sued the company and Guo. The investors allege they never received the GTV stock they paid for, despite Guo’s pledges that they could invest with “no business risk.” The SEC is still investigating the GTV stock offering and related fraud allegations, sources told Mother Jones.

GTV formed the center of a media empire Guo launched with Bannon’s input and assistance. Like other Guo ventures, the site trafficked in conspiracy theories,   including claims that Chinese hackers altered votes to steal the 2020 election from Donald Trump and that Covid is a Chinese-designed bioweapon. Guo has even asserted that China is somehow using Covid vaccines to harm Jews, because “the CCP wants to gain control of all aspects of the world, and the Jews are in their way.”

Guo’s GTV also played a role in efforts by Trump backers to smear President Joe Biden’s son Hunter. In October 2020, an unknown GTV user posted videos that appeared to show Hunter Biden using drugs and engaging in sexual activity. The footage seem to have come from Hunter’s Biden’s laptop, the contents of which Bannon and Rudy Giuliani pushed to right-leaning media organizations after a Delaware repair shop owner claimed Biden had abandoned his computer there.

Lately Guo and Bannon seem to have mostly moved on from GTV. Both now lavish more attention on Gettr, the right-wing social media site that Bannon calls a “Twitter killer.” Gettr CEO Jason Miller, a former Trump aide, claims that Guo does not own the site and has no direct role in its operations, though Miller has acknowledged Guo is an investor. (Miller claims the investment is through a Guo “family foundation.”) But Guo appears to be more closely involved with Gettr than Miller has acknowledged. Mother Jones reported in January that paychecks to Gettr employees bear the address of an Upper East Side building that houses Guo’s commercial and nonprofit ventures. It is not clear if Guo’s legal problems will affect Gettr or other Guo-linked businesses.

Miller and Bannon did not respond to inquiries about GTV shutting down.