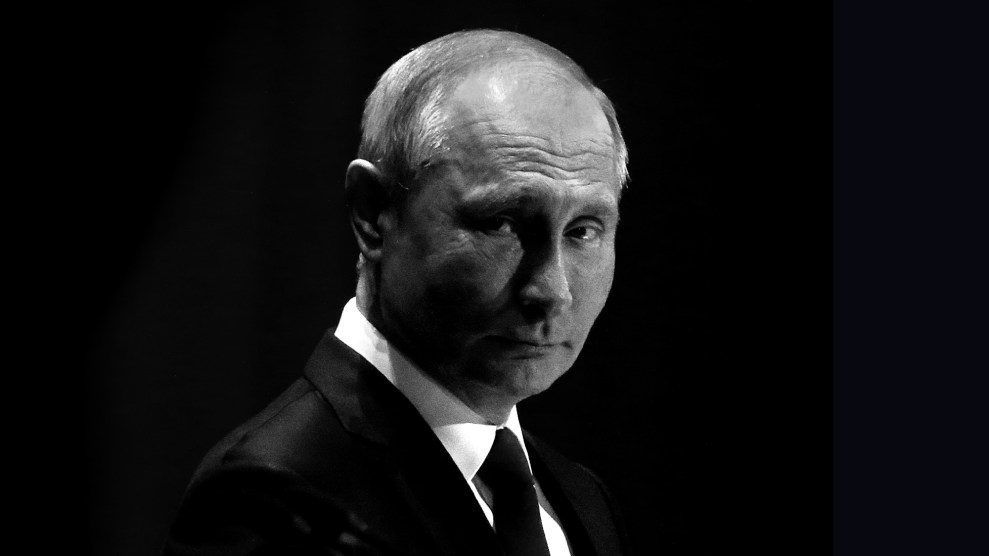 A key champion in the Russian media of Vladimir Putin’s illegal attack on Ukraine served up a troubling threat on Monday: This war will go beyond Ukraine.

State television host Vladimir Solovyov is well-known as a fanatical pro-Putin propagandist and a top cheerleader for the war with Ukraine. He claims the Russians are acting in self-defense and liberating a Ukraine that poses an existential threat to Russia. Last month he railed against sanctions imposed on Russia, perhaps because they affected his ownership of villas in the Lake Como region of Italy. This week, he said that the sanctions should be answered with nuclear strikes, exclaiming, “I still think that those who took our money should be told, you have 24 hours to unfreeze our funds, or else we’ll send you what you know we’ve got. Your choice. Tactical or strategic, take a pick. You took our money, you’re the thieves, our talk is short with you: a bullet to the head.”

Bluster is his style. And on his broadcast, The Evening with Vladimir Solovyov, he also recently proclaimed that the attempted conquest of Ukraine is only the beginning of Putin’s grand plan. In keeping with Putin’s brazen disinformation campaign, he depicted the Russian invasion as a crusade against Nazism. He compared recent events in Germany in which Ukrainian refugees have shouted, “Glory to Ukraine, glory to the heroes, death to enemies,” to Nazi rallies where Germans once yelled, “Heil Hitler.” He also told the West to stick the next round of sanctions “up your ass.”

He then turned to geostrategy. He reminded viewers that Putin has demanded that NATO return to its 1997 configuration—that is, before the Poland, Hungary, the Czech Republic, the Baltic states, Bulgaria, Romania, Slovakia, Slovenia, Albania, Croatia, Montenegro, and North Macedonia joined the Western military alliance. He suggested that after that occurs, nuclear weapons—presumably under Russian control—would be deployed in former Soviet bloc nations. The goal is the restoration of Russia as a nuclear superpower that dominates much of Europe, far beyond its current borders. That is, this war is about far more than keeping Ukraine from aligning with the West.

Solovyov spelled it out: “And if you think we’re going to stop with Ukraine, think 300 times, I will remind you that Ukraine is merely an intermediate stage in the provision of the safety of the Russian Federation.”

Here’s video (in Russian) of him making this warmongering point:

Bombastic and cheeky, Solovyov (sometimes spelled Soloviev) has long been controversial. Last year, he was blocked from the social media app Clubhouse for anti-queer comments. He was banned from entering Latvia a year ago after he described Adolf Hitler as a “very brave man” while criticizing Russian opposition leader Alexei Navalny. (He also produced an admiring documentary about Italian fascist leader Benito Mussolini.) Alla Gerber, the president of the Russia Holocaust Foundation, called Solovyov “crazy and dangerous,” noting that to “to compare the oppositionist, a man who is fighting for democracy, with Hitler, you have to be a madman and a very bad person.” It was Navalny’s anti-corruption organization—now banned in Russia—that revealed Solovyov owns those two villas in Italy. In 2020, a Change.org petition was initiated calling on Western governments to prohibit Solovyov from entering European countries and the United States, citing his xenophobia and extremism.

Solovyov has for years vociferously supported the Kremlin’s propaganda about Ukraine, casting the conflict in eastern Ukraine as a righteous battle between Ukrainian fascists and Russian anti-fascists. When Russia was recently slapped with tough sanctions, he took it personally and complained on one of his broadcasts:

I was told that Europe is a citadel of rights, that everything is permitted, that’s what they said… I know from personal experience about the so-called ‘sacred property rights.’ With every transaction I was bringing paperwork demonstrating my official salary, income, I did it all. I bought it, paid crazy amount of taxes, I did everything. And suddenly someone makes a decision that this journalist is now on the list of sanctions. And right away it affects your real estate. Wait a minute. But you told us that Europe has sacred property rights!

He has enthusiastically hosted guests on his shows with extreme viewpoints. One recently demanded the West pay Russia reparations for the sanctions and give back Alaska and return Olympic medals “unlawfully taken” from Russian athletes and recognize that Russia owns the Antarctic. And his broadcasts have long beaten the drums of war—with Ukraine and beyond. In April 2021, he hosted a deputy dean at Moscow State University who said, “Everything will start in Ukraine. We will be forced to step onto the battlefield in a fight for which they think we’re not ready.” Solovyov asked: “A fight against whom?” The answer: “Against the collective West.”

As Julia Davis reported in the Daily Beast, days after Putin launched the war, Solovyov, during one broadcast, “theatrically looked down at his watch and asked, ‘Is Trump coming back soon?’” As if that would be good for Putin.

These days, government officials, analysts, and citizens around the world are trying to figure out Putin’s thinking, as the war grinds on and Ukrainian civilians are slaughtered. Does Solovyov reflect Putin’s views or is he just another TV loudmouth playing to the crowd? The lives of many might depend upon the answer to that question.