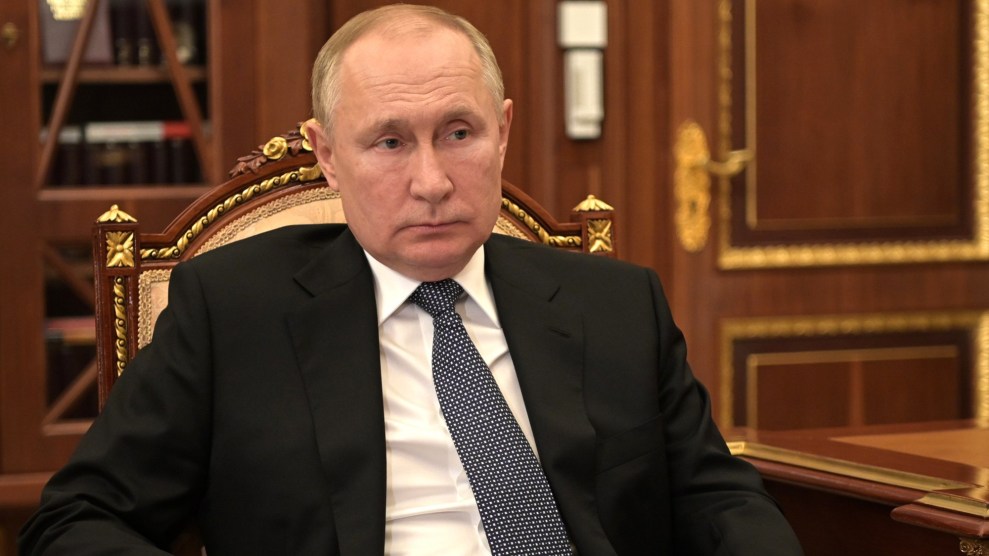 The New York Times ran a piece Wednesday about US right-wingers parroting Kremlin talking points and swapping pro-Russian conspiracy theories with Moscow—most notably the unproven claim that the US government has been funding bioweapons labs in Ukraine.

As the Times reported, war-related mentions of “bioweapons labs” in Russian- and English-language media and social media have more than doubled since early March, when Moscow gave the theory a fine boost. On March 6, its Defense Ministry released a televised statement in which Russian officials claimed to have uncovered “traces of a military biological program being implemented in Ukraine, funded by the U.S. Department of Defense.”

Just a few days later, on March 9, Fox News host Tucker Carlson—whose clips, as my colleague David Corn first reported, are being incorporated into the state media’s official propaganda strategy—dutifully aired the Defense Ministry’s statement. “Nuland just confirmed that the Russian disinformation they’ve been telling us for days is a lie and a conspiracy theory and crazy and immoral to believe, is in fact, totally and completely true,” Carlson said. “Whoa!” (He was referring to Senate testimony by Under Secretary of State for Political Affairs Victoria Nuland, who responded to a question from Sen. Marco Rubio (R-Fl.) by saying that Ukraine does have “biological research facilities,” which US officials are worried could fall into Russian hands.)

On the day after Carlson’s broadcast, as Corn reported, Putin’s minions issued a memo with “recommendation for coverage” that ordered state media outlets to use Carlson clips on their programs. The same memo also dealt with the biolab conspiracy, Corn writes:

[It] highlights this bioweapons allegation as a top talking point for Russian media, noting the message should be that the “activities of military biological laboratories with American participation on the territory of Ukraine carried global threats to Russia and Europe.” The document goes further, encouraging its recipients to allege that the “the United States is working on a ‘biogenocide of the Eastern Slavs.’”

That’s a nutty claim. Yet it’s not unreasonable to distrust US government officials, too, on the topic of military conflicts. You may recall the Pentagon Papers, or the military’s coverup of civilian casualties in Syria, or the Air Force’s lies about nuclear mishaps. And who can forget how the Bush administration used bogus claims that Iraq’s Saddam Hussein was harboring weapons of mass destruction as a pretext to invade and occupy. The resulting lack of trust makes it easy for our adversaries, foreign and domestic, to cast doubt upon government claims.

So I reached out by email to a person who knows a thing or two about the subject: an American bioweapons expert with security clearances who has worked closely with government officials but is not connected to the administration. This expert agreed to be quoted anonymously, and the upshot was that America’s primary post-Cold War mission in Eastern Europe has been the safeguarding and containment of some very scary stuff.

The USSR’s dissolution “left a big problem, because Ukraine still housed all manner of nuclear and chemical weapons from the Soviet era.”

After the fall of the Berlin Wall and the unsuccessful 1991 coup against Gorbachev, the USSR dissolved and Ukraine gained independence and recognition by the West, my source noted, and “that left a big problem, because Ukraine still housed all manner of nuclear and chemical weapons from the Soviet era, left behind—thousands of warheads, in fact.”

The Nunn-Lugar Act of 1991 created a pool of money to pay the Ukrainians to get rid of their WMDs. And—”to their ever-lasting regret!” the source said—Ukraine agreed to denuclearize. For a number of years, “the US has quietly been helping Ukraine to dismantle its Soviet-era chem/bio stuff. It seems possible that some US expertise (and possibly a small number of US personnel?) remains in Ukraine, established to retire safely the Soviet-era WMD. I have no specific idea what chem/bio matériel was left behind. So, at the core of those right-wingnut conspiracy theories may be a small kernel of truth, but one that’s being distorted beyond any (responsible) recognition.”

“Prior to Putin’s war,” the expert summarized, “the US had certainly paid the Ukrainians to dismantle WMD, and also sent experts to help with it. But given the little of that story that is public knowledge, so much of that collaborative de-armament work was done secretly/covertly—for obvious and understandable reasons.”

I was curious whether my source agreed with former Pentagon official Andrew Weber—and Nuland, for that matter—about Moscow’s possible motivation for spreading false claims about bioweapons in Ukraine. Indeed, the person said, “Putin might try to use the existence of any existing Ukrainian labs that deal with chem/bio, and whatever US connections these may—or may not—have, as a pretext under some kind of false-flag operation. Putin often accuses his adversaries of precisely the same thing that he’s doing.”