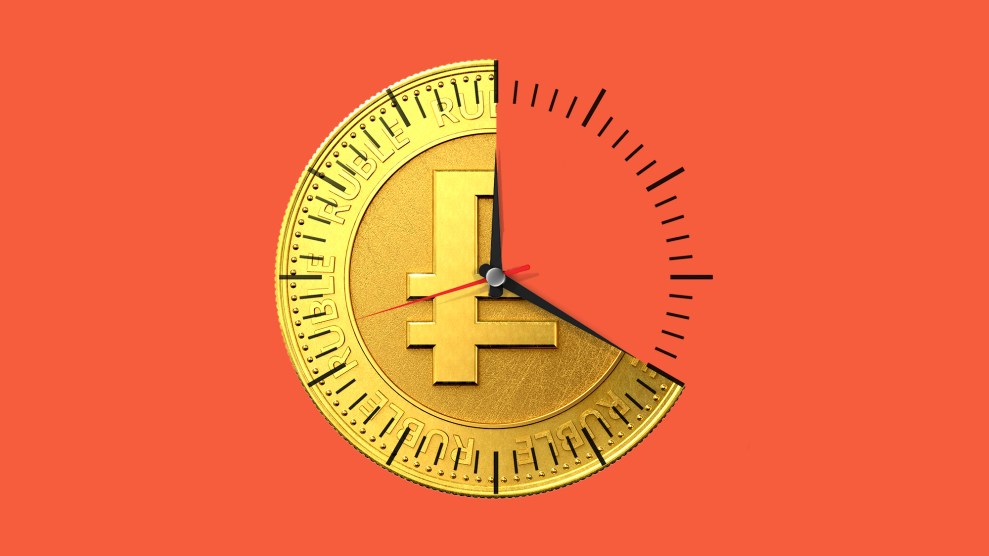 Vladimir Putin’s invasion of Ukraine has put the issue of international corruption front and center, sparking conversations and regulatory changes that policymakers in Washington and European capitals had put aside for decades. But unless the Biden administration and its European allies act fast, the chance to punish Russian oligarchs and others close to Putin could slip away—in some cases, quite literally, as mega-yachts leave their berths and private jets take flight for friendly skies.

“We have this image that the U.S. government and the U.K. government know exactly where these assets are… but we don’t.”

Financial sanctions imposed by the United States and Europe have already hit Russia hard. The country’s markets are in free-fall and western businesses have cut ties with Russian counterparts, largely isolating Vladimir Putin’s regime financially. The decision last week by the Biden administration and a number of European governments to target Putin-linked oligarchs, on its own, represents something of a sea change—even if it may be coming too late.

“When you have the president of the second largest nuclear arsenal in the world saber rattling, I think even those who don’t follow the news closely can make the connection that, ‘Oh my god, there is a real national security risk to let them infiltrate our financial system,’” says Casey Michel, an investigative journalist and adjunct researcher at the Hudson Institute who has written extensively about kleptocrats. “I don’t think this genie is going back in the bottle anytime soon.”

Russian billionaire Alisher Usmanov's 512-foot yacht has been seized by German authorities in the northern city of Hamburg. https://t.co/yQh7rE4DMy pic.twitter.com/U1dVRVBIBc

Even before this war, momentum for a string of anti-corruption measures that would apply to oligarchs of all stripes, including many of the targeted Russians, had recently built across United States and western Europe, prompted by growing concern over a ramp up in global grift. Many oligarchs have been preparing by layering more and more levels of anonymity on the ownership of their most valuable assets—moves that now limit western governments’ ability to root them out.

“I’ve been supportive of seizing these assets,” Michel says, but “the problem is that we have this image that the U.S. government and the U.K. government know exactly where these assets are… but we don’t.”

Decades of allowing oligarchs to bring money into western Europe and the United States using shell companies, anonymous trusts and small armies of “enablers”—bankers, lawyers, real estate agents, and auction houses—has given Putin’s oligarchs plenty of time to get ready, Michel and other transparency experts say. On top of that longer term trend, over the past several weeks, other assets that were not as well hidden have been seen moving away from places where U.S. and European authorities can reach them.

“The sanctions are a good start. The fact that we’re recognizing the oligarchs as the guys who are best able to influence Putin, that is great,” says Jodi Vittori, a Georgetown professor and expert on corruption and national security. “But we’ve given them 30 years to hide their assets. And we know that the yachts are showing up in Maldives, that their aircraft are showing up in the United Arab Emirates.”

While gaudy holdings like private jets, yachts, and mansions in tony London or Miami neighborhoods are eye catching, there is a tremendous amount of oligarch wealth already well hidden in less visible forms. Vittori says it is urgent that the Biden administration and European allies act quickly to identify and freeze such assets.

“Putting out a list of oligarch assets in a year is no good if all this stuff has already moved,” she says. “Anything they don’t already have well hidden, they will have had time to hide.”

“Time is indeed of essence, and this stuff can be moved very quickly.”

Still, as much as Vittori says she wants to see quick action, she says it has to be done in accordance with legal norms: “We don’t just want mass expropriations just because we can… The reason we’re doing this is for rule of law to prevail, we don’t want to undermine our own rule of law to do it.”

That impulse, says Alexandra Wrage, founder of TRACE International, an international anti-bribery business association, helps explain why oligarchs chose to move money to countries with robust banking and legal systems in the first place. “Kleptocrats hide their assets in the West, in part because the West has the rule of law and the rule of law is slow and deliberate and gives the accused rights,” Wrage says.

That said, there are already laws in place that can be used to target oligarchs close to Putin, and loopholes that could make a difference if quickly closed. In the United States, Vittori points to the Magnitsky Act, a law passed in 2012, that allows the government to freeze assets tied to anyone who has violated human rights laws or engaged in corruption. European versions of the law only allow targeting assets of those linked to human rights abuses, but Vittori says amending them would be relatively simple.

Under the 2001 Patriot Act, American financial institutions were required to scrutinize inflows of cash and file suspicious transaction reports after spotting something unusual. While the law originally targeted a range of industries serving the wealthy, Michel explains that key portions were quickly neutered.

“A couple months after it passed, the Treasury issued all these exemptions—exemptions for real estate, exemptions for private equity and hedge funds,” he says. While the government said the limits were temporary and designed to give regulators time to study how to implement the law, they’ve been in place for two decades. Michel and other experts say it is time to lift them.

Pending such a crackdown, Vittori is concerned that oligarchs will quickly move money to jurisdictions where local governments have made it clear that they will not condemn Putin’s attack, like the United Arab Emirates or Hong Kong. And once assets enter the UAE or another friendly banking system, they can emerge on the other side with no trace of origin—once again free to be parked by oligarchs in mansions and yachts. The U.S. could apply pressure to the UAE, one of its closest allies in the Middle East, or the international community could quickly target money coming from the UAE or Hong Kong for additional scrutiny.

While the pursuit of oligarch money can be a bit of a game of whack-a-mole, stricter rules in more jurisdictions does limit the number of places where the money might reappear. Oligarchs need stable and safe places to hide their assets, and blocking as many options as possible as quickly as possible tightens the net and limits opportunities to escape it, experts say. “Time is indeed of essence, and this stuff can be moved very quickly,” Vittori warns. “It’s not like the oligarchs will wait.”

Even if Putin’s oligarch allies manage to shelter assets at risk of seizure, transparency and corruption experts are optimistic that the invasion of Ukraine has presented an unavoidable and lasting inflection point. The last two years have seen governments on both sides of the Atlantic show a increased willingness to take tough stances on illicit money flows. In December, the Biden administration released the US’s first ever strategy to counter international corruption, and legislation Congress passed last year aims to end the use of shell corporations for corporate secrecy; it has not yet been implemented.

“Some of the recent flurry of activity has just accelerated anti-corruption trends that otherwise might have taken a decade to enact,” says Wrage. “But there’s still a lot to be done.”