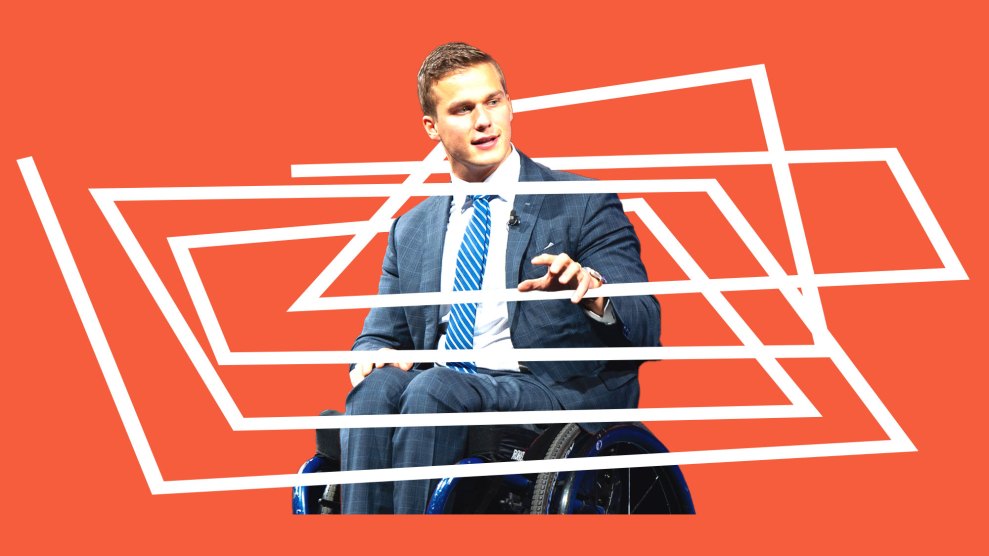 Of all the absurd figures in modern politics, nobody—not even Lauren Boebert—has Rep. Madison Cawthorn’s once-in-a-generation talent for making misguided and self-destructive decisions for no discernible reason. Since his election in 2020, the 26-year-old Republican has been a veritable prodigy of controversy, somehow even managing to alienate members of his scandal-plagued party both in DC and in his home state of North Carolina.

Cawthorn started off his political career with a series of apparently false statements about a car crash that left him paralyzed. But in recent months, he seems to be committing transgressions at an accelerated rate, to the point that some days he’s now the focus of multiple mini-scandals (and some not-so-mini ones). On Tuesday, Cawthorn was cited for attempting to bring a loaded gun through airport security in his carry-on bag—the second time in little more than a year that TSA officials have had to prevent the member of Congress from flying with a firearm.

That same day, the conservative-leaning Washington Examiner alleged that Cawthorn may have violated insider-trading laws. In late December last year, Cawthorn commented on an Instagram photo of himself and hedge fund manager James Koutoulas, the main investor of the Let’s Go Brandon (LGB) cryptocurrency.

“LGB legends,” the comment read. “Tomorrow we go to the moon!”

The next day, Let’s Go Brandon announced a sponsorship deal with NASCAR driver Brandon Brown, which raised its value by 75 percent. Experts told the Examiner that if Cawthorn had inside knowledge of the deal and if he owned the cryptocurrency at the time, his actions could constitute a potential violation of federal law. (Cawthorn stated in a February 2022 video that he owned at least some LGBCoin, though it’s unclear when exactly he acquired it. His office did not respond to a Mother Jones request for comment.)

Together, the loaded gun and the crypto incidents shed light on what separates a Cawthornean scandal from the controlled chaos of other far-right figures like Marjorie Taylor Greene and Matt Gaetz. Unlike other members of the 4Chan Caucus, who weaponize cruelty and outrage toward specific ends (like overthrowing American democracy), Cawthorn’s bizarre stunts are more often than not completely purposeless, combining the usual far-right malice with an extraordinary sense of obliviousness.

If you’re starting to lose track of the numerous pits that Cawthorn has dug himself into, here’s a convenient list to refresh your memory:

“He leaves me in a car to die in a fiery tomb.”

When Cawthorn was a teenager, he and his friend Bradley Ledford were driving back to North Carolina after a spring break trip to Florida, when Ledford fell asleep at the wheel and crashed. The accident, which left Cawthorn with only limited use of his legs, is an undoubtedly tragic event in the congressman’s life and a dramatic enough story that one would think Cawthorn would have no need for embellishment. However, in a 2017 speech at Patrick Henry College, Cawthorn contradicted Ledford and his own prior statements, saying that his friend had abandoned him “to die in a fiery tomb.”

“He was my brother, my best friend,” Cawthorn said. “He runs to safety deep in the woods and just leaves me in a burning car as the flames start to lick my legs and curl up and burn my left side.”

There’s no factual basis for this account. Ledford told the Washington Post that Cawthorn was unconscious after the crash, a claim buttressed by a deposition in which the future congressman said he had “no memory” of the accident. Rather than running “to safety deep in the woods,” Ledford said that he’d pulled Cawthorn from the burning car, potentially saving his life.

Lying about his college acceptances

Cawthorn has implied that as a result of the accident, he was unable to follow through on his dreams of attending the US Naval Academy. However, this was just another falsehood, as the Naval Academy had rejected him before the accident. Cawthorn has also claimed that he was accepted to Princeton and to an online program at Harvard, only to later confess that he hadn’t been admitted to either.

Cawthorn eventually attended Patrick Henry College, a conservative university in Virginia that typically enrolls between 300 and 400 students, where, by his own account, he mostly received Ds before dropping out. Despite the fact that he was there for only a single semester, Cawthorn reportedly developed a reputation among female members of the student body, a significant number of whom told Buzzfeed and the Washington Post that he had sexually harassed them—allegations Cawthorn has denied. One of his accusers worked as a Republican intern on Capitol Hill at the time she went public with her allegation.

During Cawthorn’s general election campaign, more than 160 members of the Patrick Henry community signed onto an open letter that accused Cawthorn of “gross misconduct towards our female peers, public misrepresentation of his past, disorderly conduct that was against the school’s student honor code, and self-admitted academic failings.” The letter added that he had “established a reputation of predatory behavior.”

The Cawthorn campaign attempted to counter this letter with a Facebook post saying that he had the endorsement of “a significant number of PHC alumni and former students.” The post was signed by six people, two of whom worked on the campaign.

Shortly after the Russian invasion of Ukraine, Cawthorn told his supporters that Ukrainian President Volodymyr Zelenskyy was a “thug” and that the “Ukrainian government is incredibly corrupt and is incredibly evil and has been pushing woke ideologies.”

The remarks caused a major headache for the Republicans at a time when many party members were backpedaling from their Putin-friendly rhetoric. In an intriguing twist, Cawthorn’s comments were first reported by Republican strategist Karl Rove, who insisted that they didn’t represent the Republican Party as a whole.

Driving with a revoked license

Cawthorn has repeatedly been stopped and cited for speeding. Last month, Cawthorn was charged with driving with a revoked license, which carries a penalty of up to 20 days in jail.

Republicans, many of whom reportedly had to field concerned questions from their spouses, were really pissed off. Cawthorn received a firm talking to from House Minority Leader (and model of honesty) Kevin McCarthy. McCarthy told reporters that Cawthorn had amended his claims during the meeting, saying that “he thinks he saw maybe a staffer in a parking garage [do cocaine] from 100 yards away.” But this remark seems to have been the straw that broke the GOP’s back. Ever since, North Carolina Republicans have been waging a full-throated campaign to remove Cawthorn from Washington.