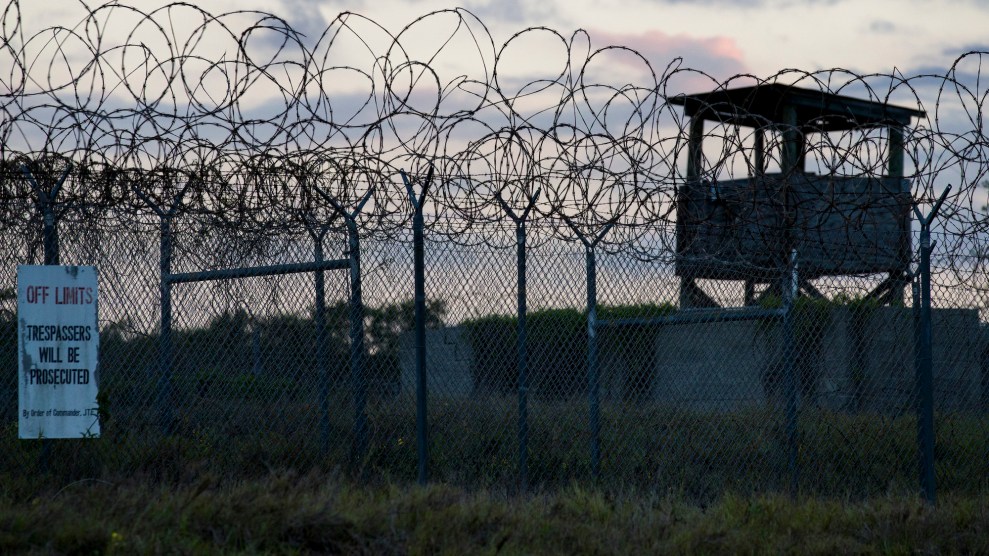 The sun sets behind the closed Camp X-Ray detention facility, on April 17, 2019, in Guantanamo Bay Naval Base, Cuba. The Biden administration has been quietly laying the groundwork to release prisoners from the Guantanamo Bay detention center and at least move closer to being able to shut it down. Alex Brandon/AP Photo

Nearly 20 years after Sufyian Barhoumi was first detained at the Guantánamo Bay military prison, more than 14 years after the US government dropped all terrorism charges against him, and six years after being cleared for release, the Algerian citizen is finally going home. The Biden administration announced Saturday that Barhoumi was being returned to Algeria, as part of its pledge to close the prison where hundreds of detainees have been held for years without formal criminal charges or trials. He is the third Guantánamo detainee to be resettled by the administration.

“Our government owes Sufyian and his mother years of their lives back,” said his lawyer, Shayana Kadidal, senior managing attorney at the Center for Constitutional Rights, in a statement. “I’m overjoyed that he will be home with his family, but I will dearly miss his constant good humor and empathy for the suffering of others in the utterly depressing environment of Guantánamo.”

Barhoumi left Algeria in the 1990s for better opportunities in Europe. When those didn’t pan out, he went to Chechnya hoping to join the Muslim insurgency against Russia, and from there moved to jihadist training camps in Afghanistan, where he lost a couple of fingers working on explosives. Barhoumi told the Wall Street Journal that he fled to Pakistan after the US invaded Afghanistan in the wake of the 9/11 attacks. Pakistani officials arrested him during a raid on a safe house in 2002 and turned him over to the US military. The raid also led to the capture of a man named Abu Zubaydah, whom the US government mistakenly believed was a high-level member of al-Qaeda. The CIA subsequently tortured Zubaydah, water-boarding him 83 times, sealing him into small boxes, and subjecting him to forced nudity and sleep deprivation—an ordeal that prompted him to provide false information to his interrogators claiming that dozens of other men in US custody were involved in terrorism. Barhoumi said that he’d only been at the safe house for 10 days at the time of the raid and that he barely knew Zubaydah.

In the early days of the military base, the George W. Bush administration alleged that captives like Barhoumi were “enemy combatants” in the “war on terror” and not covered by the Geneva Convention and thus could be detained indefinitely at Guantánamo without charges. The administration fought holding military trials or the prosecution of terrorism suspects in US courts in large part because the use of torture on the suspects would taint any such prosecutions.

US officials initially suspected Barhoumi of being a jihadist bomb maker, and he was one of the few detainees to be charged in a military commission. But all charges against him were dropped in 2008, along with four other men who’d been connected to Zubaydah. Nonetheless, he continued to languish at Guantánamo Bay. In 2013, he begged the government to charge him with war crimes—any war crimes—so that he could plead guilty and receive a specific sentence rather than face imprisonment indefinitely. The government refused.

A model prisoner, Barhoumi learned English and embraced soccer and American pop culture (apparently his favorite movie is Bring It On, the cheerleading comedy starting Kirsten Dunst, according to his lawyers). He has previously told the Wall Street Journal that despite his long years of indefinite detention with no charges, he still had “no black heart against America.” The Obama administration cleared him for transfer back to Algeria in 2016. In preparation for his return to Algeria, his family had found him a bride and were setting him up to run a pizza parlor. He was looking forward to seeing his elderly mother. (His father, a lawyer whom the French had imprisoned during the Algerian independence movement, died while Barhoumi was detained at the naval base.) But the transfer paperwork wasn’t quite finished before Donald Trump was elected president. After being sworn in, Trump immediately dismantled the State Department office charged with negotiating the resettlement of Gitmo detainees and halted all inmate transfers. The pizza parlor was put on hold.

Now, however, he will make it home in time for his brother’s wedding, according to his lawyers, and his own bride is still waiting for him. “Hasta la vista!” he told his lawyers Thursday in their last communication.

Meanwhile, of the original 780 men detained at Guantánamo, 37 remain, and 25 of those still have not been charged with a crime. Another 18 have been cleared for transfer.