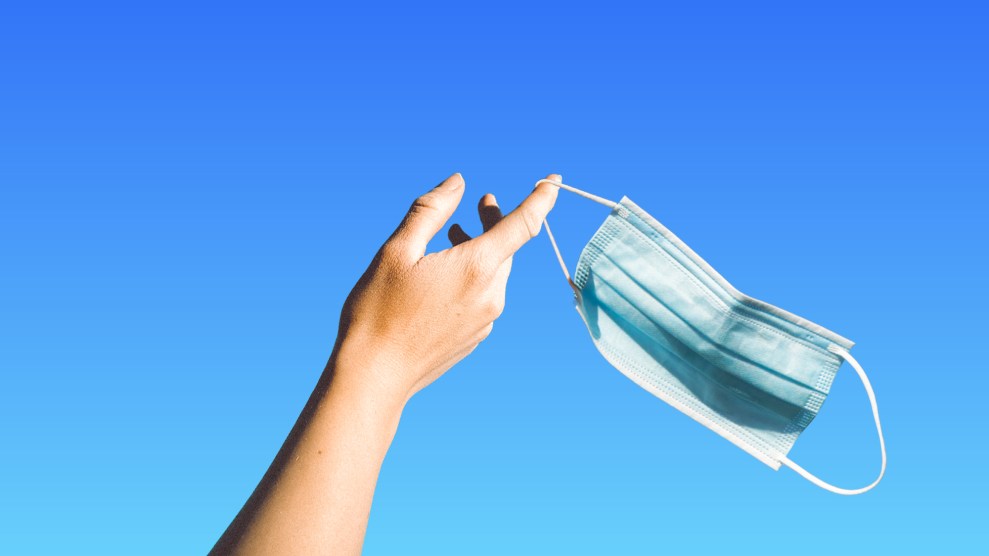 At Mother Jones, stories about Covid’s disparate impacts have been at the core of our pandemic coverage. Back in April 2020, my colleagues Edwin Rios and Sinduja Rangarajan, for example, were among the first journalists to show that Covid was killing Black Americans at a disproportionately high rate. We’ve also described racial disparities in Omicron-related hospitalizations, distribution of monoclonal antibodies, and a rare, Covid-linked inflammatory disease in children, among many other cases. In short, the data shows that Covid has taken an especially hard toll on people of color in the United States (and you should blame racism, not the virus, for that).

“I’ve certainly heard a lot of people saying, ‘I knew it’—especially Black people and other people of color being like, ‘This is what I felt like I was observing in real-time.'”

While reporting these statistics is essential, a new study suggests it may come with an unintended consequence: a backfiring effect among white audiences. The research, which was published in the journal Social Science & Medicine late last month, suggests that if white Americans read about racial disparities, it may reduce support for health policies like masking.

For people of color in the US, the results may feel familiar. As the lead researcher on the study, Allison Skinner-Dorkenoo, who is white, puts it: “I’ve certainly heard a lot of people saying [about the findings], ‘I knew it’—especially Black people and other people of color being like, ‘This is what I felt like I was observing in real-time.'” Now science has confirmed it.

The idea for the study came to Skinner-Dorkenoo, an assistant professor in the psychology department at the University of Georgia, in the spring of 2020, after she shared a news report on social media about Covid’s disproportionate impact on Black Americans. “I was like, ‘This is bad, we need to raise awareness about racial disparities and Covid-19,'” she tells me. “So I shared a couple of articles as they were coming out.” A friend, who is Black, wondered if sharing such information may send white people the wrong message. “He just didn’t have a good feeling about the impact that might have,” she says. As a scientist who studies racism and how biases shape our society, Skinner-Dorkenoo looked into it—and found that psychology backed up her friend’s instinct: Previous research showed that people tend to care about things less when they seem more distant from themselves and their peer group. She and her colleagues decided to put together a research plan to better understand the effect in the context of this pandemic.

They designed two studies, both of which were conducted in the fall of 2020: In the first, the researchers designed a survey to measure white Americans’ awareness of racial disparities and, critically, how that awareness tracked with fear of Covid or support for safety precautions. Using an Amazon crowdsourcing platform, they recruited nearly 500 white Americans across 48 states to fill it out. “What we found was that the people who perceived there to be greater racial disparities in Covid-19 infections and deaths, that they were less fearful of Covid-19 for themselves and for their friends and family, and were less supportive of safety precautions,” Skinner-Dorkenoo says.

With the second study, the idea was to better understand what was causing white people to be less fearful. While the first study showed there was a link between information about racial disparities and fear, the researchers hadn’t shown why the two factors were associated. Plus, in the first study, some of the respondents blamed disparities on Black Americans’ attitudes, saying—incorrectly—that they thought Black people were being less careful than white people when it came to Covid. So, the researchers designed another, larger survey. This time, participants (about 1,500 white Americans in 50 states and DC) were prompted to read one of three articles: one that described Covid generally, one that described Covid’s disparate impacts on non-white Americans, and another that described the impacts, with a short explanation that these racial disparities are a result of larger systemic issues. The idea, at least in theory, was that this added information in the third article might “counteract” the backfire effect.

The results were not what Skinner-Dorkenoo had hoped for. “What we found was that it, well—that did not help,” she says. In fact, with both of the articles in which white people read about Covid’s racial disparities, overall, respondents were less fearful of Covid, less supportive of safety precautions, and even had less empathy for people who are vulnerable to the disease. And, she says, the effect was “even worse” for respondents who were assigned to read the added context.

The idea was that this added information in the third article might “counteract” the backfire effect. “What we found was that it, well—that did not help.”

Her team’s work did not address why this is the case, and Skinner-Dorkenoo stresses that more research is needed. But part of it, she speculates, might have to do with how much information they provided. “I think part of it might have to do with—we just gave very little information,” she says. “We didn’t go into detail of talking about how these systemic inequalities emerged, and how these things were not accidental.”

For experts, the results reflect what is already known about human behavior and psychology. According to Steven O. Roberts, an assistant professor of psychology at Stanford University who studies how to identify and dismantle the psychological bases of racism, and who identifies as multiracial, the study’s results are “rooted in a deeper reality of how humans work.” He adds, “We live in a world in which if people aren’t directly affected by a problem or an issue, they’re less concerned with it.” Similarly, Joseph Lee, an associate professor at East Carolina University with a specialty in studying health inequities, and who is white, says the study checks out, scientifically speaking. “My first thought was, this makes sense in the context of the literature we already have,” he tells me.

In short, this phenomenon goes beyond Covid. In one 2016 study, for instance, white survey respondents were asked about a proposal to build a new, potentially hazardous chemical plant near a neighborhood. Participants were asked whether or not the plant should be built. In half of the questionnaires, it was revealed to respondents that the neighborhood was predominantly Black. In the other half, the neighborhood was predominantly white. When the neighborhood was predominantly Black, explains Roberts, people were less opposed to development than when the neighborhood was white. Researchers have observed a similar trend in other areas, too—a certain callousness when white people are shown devastating impacts on people of color, like disparities in education, for example, or the racial breakdown of prison populations in New York City, and asked about policies like stop-and-frisk. “People are more accepting of negative things when it doesn’t involve their own group,” Roberts says. “If you can show that these are issues that actually do affect you, they do affect us all, then that can actually motivate people to want to be more protective and supportive. But if you just highlight the disparities—‘Hey, it’s happening with them and not you’—well, now you’re giving people a reason to disengage.”

So what does this mean for the news organizations who share this data? If communicating about Covid racial disparities does have a backfiring effect, how should media outlets like Mother Jones talk about it? Of the three independent experts I spoke with, none of them think avoiding this information is the answer. “Your goal is to inform. Your goal is to say there are disparities,” says Dominique Brossard, a professor and risk communication expert at the University of Wisconsin, Madison, referring to my role as a journalist. But advocacy groups, “whose primary goal is to inspire change,” she says, “might take a much different approach.”

And for the experts I spoke with, the findings bring up several potential research questions. For one, Brossard, who is white, wonders how the results may have been different if the authors had asked respondents about their perception of societal risk—for instance, how they thought Covid may impact their state or city, beyond just personal fear. Additionally, Roberts says that if he were to do a follow-up study to this one, hypothetically speaking, he’d look into how people of color respond to information about Covid’s racial disparities and whether you’d observe a decrease in empathy. “I would expect that you would not,” he says.

The study’s results are “rooted in a deeper reality of how humans work.”

For Skinner-Dorkenoo, she’d like to look at how white survey participants would respond if they’d received more historic context about why Covid disparities exist, “making it really clear that that’s unjust, and not just implying that it’s unjust,” she says.

There is some evidence that doing so could make a difference. She notes that her study’s results capture overall trends, not every participant. And among one subset of their sample, she and her colleagues saw “a completely opposite trend”: Participants who were already aware of the systemic causes of Covid racial disparities—that people of color in the US are more likely to be essential workers, and are less likely to have access to testing, personal protective equipment, or health care—saw very different results from the rest of the group. Across both studies, she says, “The people who were more aware of these structural contributors were the most fearful about Covid-19—and the most supportive of safety precautions.”

In the face of such disheartening results, there’s reason to be skeptical anything will change—though this particular finding offered at least some hope to Skinner-Dorkenoo: “If [white] people are seeing it through a lens of injustice—and they’re aware of the nuance of the systemic contributors to this and the connections between these present inequalities and these other structural factors—that that may be a way to try to approach this.”