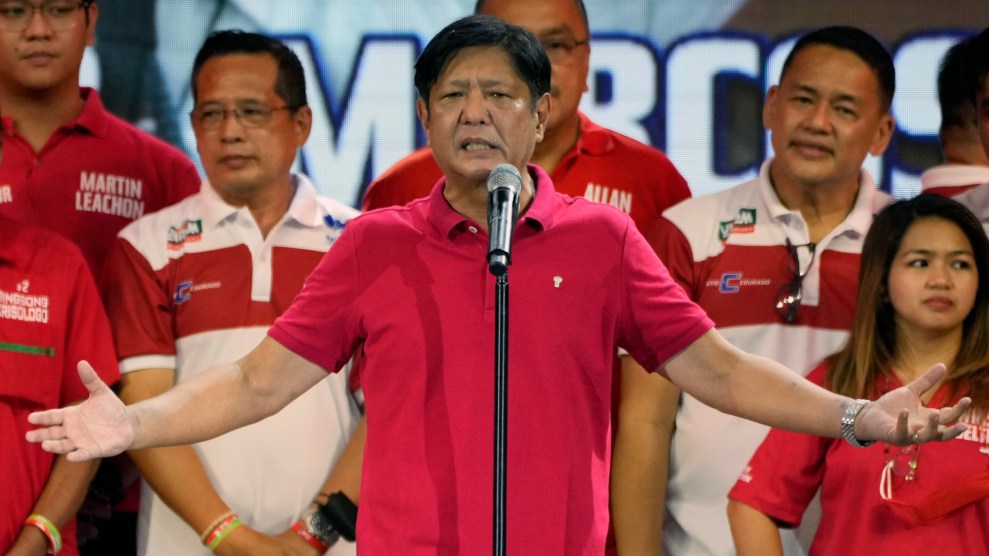 When Filipinos elect a new president next month, polls suggest they will select a man with a familiar name. Front-runner Ferdinand Marcos Jr., known by the nickname “Bongbong,” is the son and namesake of the brutal dictator who ruled the island nation for two decades before a popular demonstration forced him out.

Since Ferdinand Marcos and his wife, Imelda, fled the Philippines in 1986, their family has crept back into politics and began systematically whitewashing his tyrannical regime. With more than 50 percent of support in the most recent polls, Marcos Jr. is set to complete that process—to the horror of the Filipinos who survived his parents’ violent crackdowns on dissent.

The Marcos family history reads almost like a collection of tall tales. Ferdinand Marcos grew up in an influential family—his father was a member of the state legislature—and he first became famous as a college student after a judge convicted him of murdering his father’s political rival. The charge was eventually overturned, part of a decades-long trend in which, as the New York Times put it, the Marcoses have been “remarkably adept at avoiding jail time.”

Marcos became president in 1965, quickly becoming a key Cold War ally of the United States even as his rule turned more despotic. In 1972, he declared martial law, jailing and torturing dissidents while he and Imelda plundered the national treasury. By the time a popular resistance movement, known as the People Power Revolution, forced the Marcos family from power in 1986, they had amassed a nearly $10 billion fortune despite Ferdinand Marcos never collecting a salary greater than $14,000 a year. As Human Rights Watch noted, a commission once estimated that his government “killed more than 3,000 people and tortured thousands of others.”

Marcos Jr. floods the zone with an effervescent social media presence and colorful vlogs. In one video, he agrees to a full makeover, Queer Eye-style.

Marcos could not have stayed in power for as long as he did—or found exile in Hawaii after being ousted—without the support of Ronald Reagan. Their alliance was emblematic of the generally strong ties between the United States and the Philippines, which have persisted since the United States granted Filipinos their independence after World War II. For decades, the Philippines has been a strategically important partner for US troops, particularly as a bulwark against China. In recent years, however, current president Rodrigo Duterte—infamous for his brutal war on drugs—has moved the country closer to Beijing. Marcos Jr. is aligned with Duterte politically and has vowed to continue his China-friendly foreign policy.

Marcos Jr.’s presidential campaign includes all the familiar ingredients of a politician looking to shake off a checkered past. He floods the zone with an effervescent social media presence and colorful vlogs. (In one video highlighted by the Times, he agrees to a full makeover, Queer Eye-style.) Faced with unwelcome reminders of his family’s horrific past or his own legal troubles—Marcos Jr. was convicted of tax-related charges in the 1990s, but never served prison time—he has refused to debate his rival candidates, avoided any serious interviews, and relied on a massive disinformation campaign to deflect any criticism as “fake news.”

Helping Marcos Jr.’s campaign to revise history is a sense of nostalgia, if not outright social amnesia, when it comes to his parents’ regime. “It was right around the time of the Kennedys and they consciously modeled themselves after Camelot,” Katherine Ellison, a Pulitzer Prize-winning reporter who authored a biography of Imelda Marcos, told me. “They were very savvy with the press.”

Filipino voters interviewed earlier this month by the Times expressed little interest in going beyond that manufactured image of the Marcos family:

At a rally in Las Piñas, Ella Mae Alipao, 15, said that she got most of her news about Mr. Marcos from TikTok and Facebook, and that she did not “believe much in books.” After Mr. Marcos’s father was ousted, Ms. Alipao said, “the Filipinos found out how good he was; that’s when they realized that they should have made him president for a longer time.”

“If he is a thief, how come he hasn’t been jailed?” asked Rjay Garcia, a 19-year-old rug salesman, at a recent rally in the city of Santa Rosa. Mr. Garcia said that he believed the cases against Mr. Marcos’s family were meant “to destroy his reputation,” and that he had “never heard” of the People Power protests.

Those aren’t even the most jaw-dropping quotes in the story. That honor goes to Marcos Jr.’s campaign manager, Benjamin Abalos Jr., himself a former protester against the Marcos regime. “Whatever justice was achieved in those 36 years, I think that’s already enough,” he told the Times. “Perhaps now it’s about moving forward.”

If there’s one the thing the Marcos family has done, it is move forward. Nearly 1,000 civil and criminal cases have been filed against them in US and Filipino courts, but the “great majority” of them have been dismissed, Ellison wrote in a Times op-ed.

Since returning to the Philippines in the years following Ferdinand’s death, the Marcos family has plotted a path back to political relevance. Imelda, who ran unsuccessfully for president in the ’90s and served four terms in the Filipino Congress, “has indefatigably kept up the dynasty,” Ellison said.

Within a few weeks, the Philippines will know how successful her efforts have been.