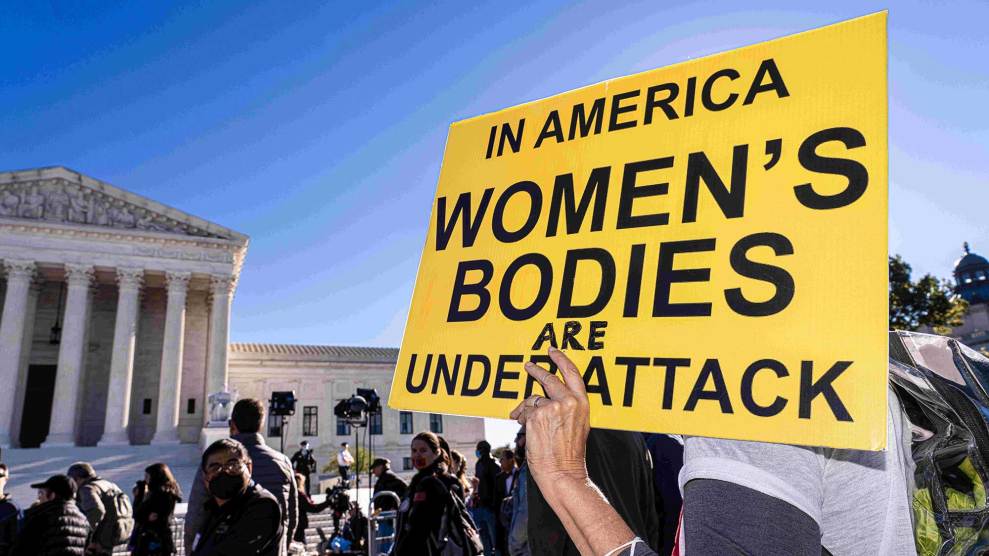 On Friday, police in South Texas’ Starr County charged a 26-year-old woman with murder and are holding her on a $500,000 bond, reports the McAllen-based Monitor. The crime, according to her accusers: She “knowingly cause[d] the death of an individual by self-induced abortion.”

It’s unclear whether the woman, identified as Lizelle Herrera, is being charged under Texas Senate Bill 8, which went into effect on September 1, 2021. The law banned abortion after cardiac activity can be detected, at around six weeks’ gestation, and added a new enforcement mechanism: It encouraged private citizens to sue anyone who “aids or abets” an abortion, and allows them to collect cash judgments of $10,000 from those they sue if successful. Many observers, including University of Chicago Law School professor Aziz Huq, have compared this aspect of SB 8 to Fugitive Slave Acts passed by Congress in 1793 and 1850, which empowered plantation owners to use freelance bounty hunters to capture escapees and terrorize free Black people.

Since Gov. Greg Abbott signed SB 8 into law last May, it has repeatedly fended off legal challenge from pro-choice advocates. In December 2021, the US Supreme Court upheld the law, but allowed other federal lawsuits against it to proceed, providing a narrow path for rescinding it in the future. In March, a ruling by the Texas Supreme Court effectively shut down that route, meaning that it will likely remain in place.

I have spent the past couple months reporting out of reproductive health clinics for a book project I’m working on, and I’ve seen Texans seeking care in Alabama, Kansas, and Tennessee. The one that sticks with me was a young woman who came to Huntsville, Alabama, after traveling to Jackson, Mississippi, where she was told she was barely over that clinic’s gestational limit. She had been traveling for almost a week and was exhausted. She told me it was only the second time in her life that she had ever left Texas.

Zaena Zamora, executive director of the Frontera Fund, a nonprofit that works to help pregnant people in deep southern Texas to get abortion care, was unsurprised by this anecdote. “The day after SB 8 went into effect, we had a caller who had to travel 15 hours overnight [by car] to Wichita, Kansas—she was seven weeks pregnant,” Zamora says. She is seeing unprecedented demand for help with travel and logistics. She told me that the group spent more on travel support just in the month of October than it did in the entire year of 2020.

Zamora said that the barriers facing Texans who live in the Rio Grande Valley, a region of the state that is close to the border, are especially great. “We’re the furthest away from any state border,” she says. “Typically, the people that we help have to travel the furthest than any other person would typically have to travel in Texas…we’re looking at 12-plus hours to get to your appointment.” Many of the people the fund seeks to help don’t have paid time off, and that’s just the beginning—there’s childcare to consider, along with money for food, lodging, transportation. Sometimes the support of the fund isn’t enough.

The Texas bill is novel because was purposely structured not to challenge Roe v. Wade, the 1973 Supreme Court ruling that established the right to an abortion without excessive government restriction. Meanwhile, the Supreme Court is currently mulling a case involving a Mississippi abortion law that could lead to the overturning of Roe. Its ruling is expected in June. According to the pro-choice Guttmacher Institute, if the conservative-dominated Supreme Court does move in that direction, “21 states have laws or constitutional amendments already in place that would make them certain to attempt to ban abortion as quickly as possible.”

Lizelle Herrera, confined on a murder charge for exercising control over her own body, is now making headlines and trending on social media. Her case may soon be the rule, not the exception.