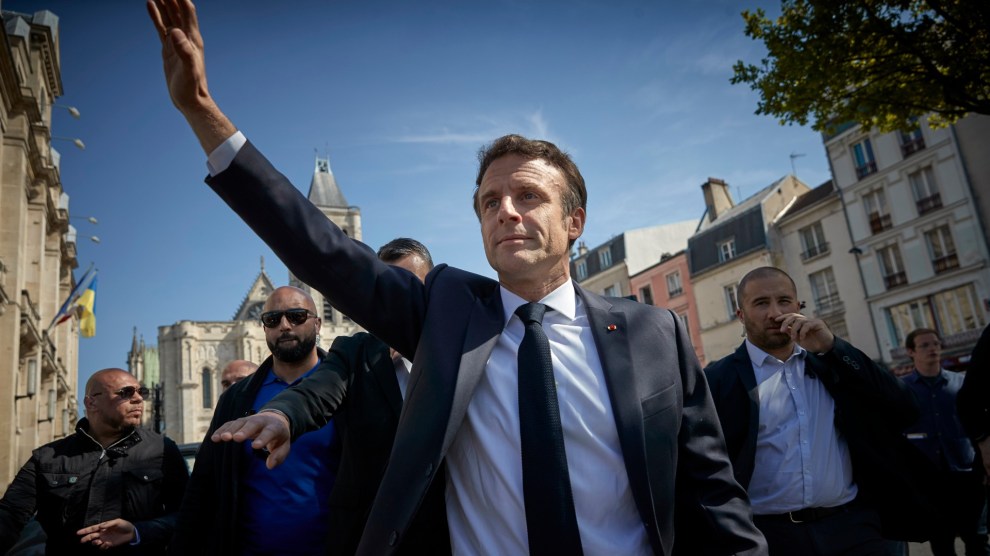 French President Emmanuel Macron is projected to win reelection today and overcome a challenge from his opponent, far-right candidate Marine Le Pen. Although Le Pen still made substantial gains compared to previous campaigns and managed to normalize her party, a far-right movement once considered far too extreme to govern, Macron’s successful reelection ultimately demonstrates the staying power of a shape-shifting, centrist politician who has managed to dominate French politics despite his broad unpopularity outside the urban elite. Macron is currently projected to win 58 percent of the vote to Le Pen’s 42 percent.

The election was unique in that it brought the French far-right closer to the presidency than it had been in almost a century. France chooses its leader with an election that can last up to two rounds. The first round features multiple candidates. If none of the candidates receive a 50-percent-plus-1 majority, the election proceeds to a runoff between the top two vote-getters. In the first round of the election, Macron narrowly beat Le Pen 27.8 percent to 23.2 percent, with leftist Jean-Luc Mélenchon coming in third with 22.0 percent.

As a result, both candidates spent the second round of the campaign attempting to woo the French left, many of whom resented Macron for tacking hard to the right on economics and immigration and Le Pen for her xenophobia and nationalism. In a debate with Le Pen on Wednesday, Macron promised to prioritize environmental policy during his second term and bashed his opponent for her and her party’s financial ties to Vladimir Putin, including a 9.4 million euro loan from a Russian bank.

Indeed, both Le Pen and Macron are highly controversial figures in France, albeit for different reasons. Over the course of his presidency, Macron has been unable to shake the public’s perception of him as arrogant and disdainful toward ordinary people. A former investment banker who the Atlantic once described as the “avatar” of the French elite, Macron has made a range of remarks that voters have perceived as snooty and out of touch, including when he described train stations as places “where one encounters people who are succeeding and people who are nothing.” Macron has also implemented tax policies favoring the rich and has instituted a series of reforms designed to make France more appealing to foreign investors. While the unemployment rate has plummeted during his presidency, he has worked to roll back unemployment benefits, proposed raising the retirement age, and changed French labor laws to make it easier for corporations to hire and fire new workers. He also responded to challenges from his right and a growing fear of Islamist terrorism in France by backing a series of hardline bills that drew widespread condemnation from civil liberties groups and Muslim activists.

A year into Macron’s presidency, anti-establishment sentiment in France boiled over, sparking months-long protests attended by French citizens across the political spectrum. Although the so-called “yellow vests” movement began among rural communities opposed to new diesel taxes, it eventually expanded into nationwide demonstrations against economic inequality, some of which devolved into violent riots.

While Macron is a relative political newcomer who appeared virtually out of nowhere to win the presidency in 2017, Marine Le Pen has long been a fixture of French politics. The daughter of far-right firebrand Jean-Marie Le Pen, Marine Le Pen worked throughout the campaign to soften her global image as a xenophobic nationalist, focusing on kitchen sink issues such as strengthening the welfare state, boosting incomes for the working class, and taking steps to combat inflation. She also stressed her hobby as a “professional cat-breeder” in interviews and shied away from making bigoted references, as she had in the past. Le Pen’s mission to detoxify her public persona was also aided, inadvertently, by a challenge from extreme right candidate Éric Zemmour, who accomplished what had seemed to be impossible: acting so beyond the pale that he made Le Pen seem reasonable by comparison.

But even as Le Pen remained laser-focused on revamping her public persona, many of her policy ideas remained the same. She campaigned on a proposed ban of the Muslim headscarf in public spaces and on reducing the influence of the European Union. Unlike Zemmour, she was quick to disavow Putin’s invasion of Ukraine, but she has also said that France and Russia should remain allies after the war concludes. She further proposed to cut off arms shipments to Ukraine and said that she would relax some sanctions on Russia, a move that could have disrupted the European Union’s goal of enforcing a blanket ban on Russian oil and gas.

In the months preceding the election, Macron was widely expected to secure an easy victory and spent much of his time away from the campaign trail attempting to persuade Vladimir Putin to withdraw from Ukraine. Le Pen took advantage of this window, consolidating her support from the French right and courting working class voters disillusioned with Macron’s economic policies. As a result, the polls narrowed substantially in the days before the first round of the election, sparking panic among the center-left both in France and abroad. However, in the final phase of the campaign, the French left rallied against the threat of a Le Pen victory and Macron turned in a strong debate performance, putting him over the top in an election that nevertheless brought the French far right within dangerously close range of the presidency.