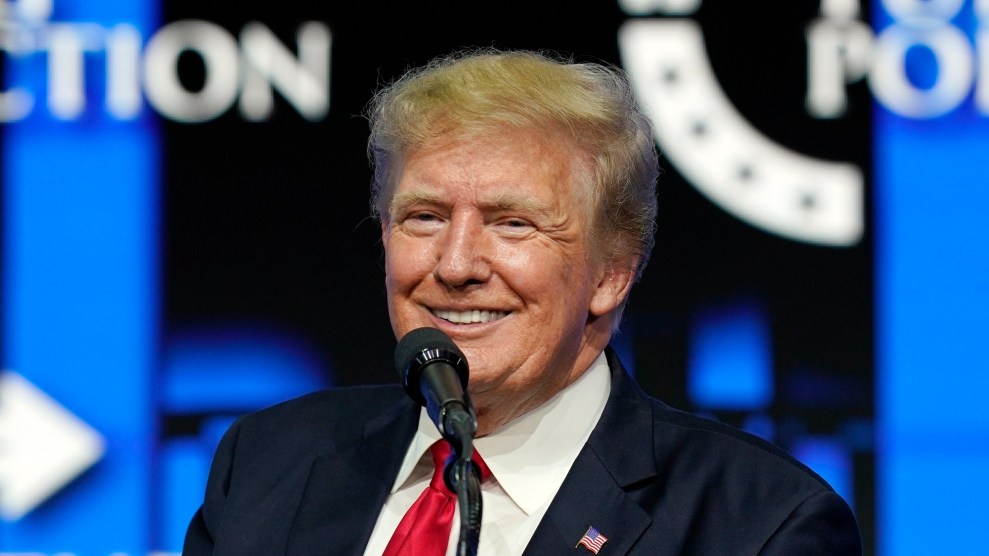 New York Attorney General Letitia James appears to be at the end of her rope with Donald Trump’s legal delay tactics, asking a judge on Thursday to hold the former president in civil contempt of court and fine him $10,000 a day for his failure to turn over documents in response to a subpoena. The judge in the case, New York Supreme Court Justice Arthur Engoron, has already ruled that Trump must turn over the documents, setting an original deadline of March 3. James’ office agreed to wait until March 31 after Trump requested more time, but in Thursday’s filing she said that deadline has come and gone without the Trump Organization producing anything but arguments about why it won’t comply.

James is pursuing a civil investigation into the Trump Organization’s finances and probing whether the former president may have committed bank, insurance, or tax fraud by improperly manipulating the value of various assets to receive more favorable treatment from lenders, insurance companies, and tax assessors. The investigation has been ongoing since at least 2019. The Trump Organization cooperated initially, but as the 2020 election approached, the company and members of Trump’s immediate family became increasingly combative. For the last year, James has been battling the Trumps to produce more documents and to force Trump, along with Ivanka Trump and Donald Trump Jr., to sit for depositions. James’ investigators have already deposed Eric Trump and several top Trump executives.

Last month, Engoron ruled that the Trumps must sit for the depositions, which will be conducted under oath, but allowed the family to appeal his ruling. The Trumps did not, however, appeal the part of his ruling involving turning over documents.

James has already obtained a large cache of Trump’s financial records from his former accounting firm Mazars, which helped prepare statements of financial condition to provide to lenders and insurance companies so they could assess the Trump Organization’s financial health. Mazars has since disavowed those statements, saying they should not be relied upon. James has also disclosed in court filings that she has evidence showing the Trump Organization used wildly incorrect valuations for various properties in different situations. For example, the Trump Organization created statements that claimed that the Trump’s triplex in Trump Tower was worth as much as $327 million, a valuation premised on the contention that the apartment was 30,000 square feet. But the apartment is allegedly nowhere near that size—James says that former Trump Organization chief financial officer Allen Weisselberg testified that it was only about 10,000 square feet and that the $327 million evaluation was inflated by “give or take” $200 million.

In last month’s ruling Engoron noted that there is “copious evidence” of fraud, allowing the case to continue after the Trumps argued James’ investigation was politically motivated.

According to James’ filing on Thursday, she’s still trying to get documents from the Trump Organization that show Trump’s role in approving or reviewing the valuations. “Given Mr. Trump’s purported meticulous involvement and focus on his business enterprise, it seems incredible that now virtually no documents exist reflecting his personal receipt and review of information regarding his assets that would bear on their valuation,” James wrote in her filing.

If those documents can’t be located, James points out, Engoron’s prior ruling requires Trump’s attorneys to explain why they can’t be found. Were they destroyed? Lost? But Trump’s lawyers have neither turned over the requested documents nor explained why they are M.I.A., according to James. Rather, they have continued to argue over why they shouldn’t be required to provide these documents at all.

For years, Trump has used stalling tactics to fend off his legal pursuers. Even as he lost case after case, appeal after appeal, Trump continued to file objections and drag his feet in response to inquiries from congressional committees, local and state prosecutors and civil plaintiffs. To a degree, the tactics worked. Trump managed to fend off any release of his tax returns until the end of his term—though he won no major legal rulings—and prolonged a criminal investigation by the Manhattan district attorney for so long that the D.A. who launched it, Cy Vance, left office before it concluded. Under Vance’s successor, Alvin Bragg, two prosecutors hired to spearhead the Trump case resigned alleging that Bragg had decided against pursuing criminal charges. On Thursday, Bragg said that wasn’t true, but secrecy rules prevented him from talking about the case’s direction or status.

James has apparently had enough.

“This Court’s order was not an opening bid for a negotiation or an invitation for a new round of challenges to the subpoena,” James argues in Thursday’s filing, with obvious exasperation at the latest round of stalling.

“The judge’s order was crystal clear: Donald J. Trump must comply with our subpoena and turn over relevant documents to my office,” James said in a statement Thursday afternoon. “Instead of obeying a court order, Mr. Trump is trying to evade it. We are seeking the court’s immediate intervention because no one is above the law.”

“The Attorney General is only going after my father because he is leading in every single poll,” he said. “She is desperately using his name in an attempt to raise money for her own upcoming political race, which is the highest form of corruption and something you would only expect in a third-world country.”

James is currently running unopposed for reelection in November.