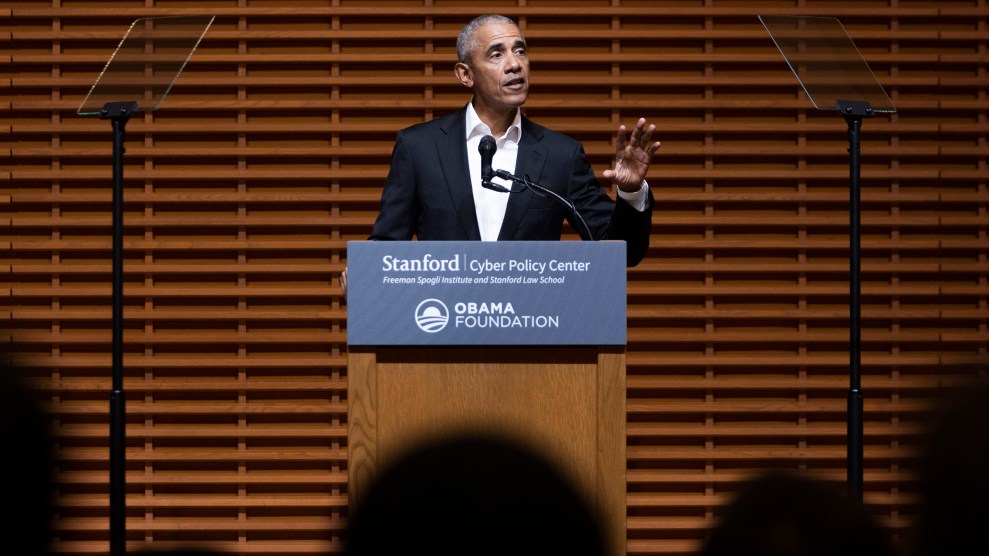 Are you at an interregnum point in your high-profile career? Did you recently come out of a very stressful situation? And are you trying to stay relevant but semi-retired and/or just have your hands in a lot of different things but still want to do a little more?

Might I suggest that you consider becoming a disinformation guy? Since 2017, it’s been the move for at least a few people who maybe don’t have a lot going on, but soon will, or have a bit going on and want to add a bit more to it. After dipping his toes into it for the past year, President Barack Obama notably became the latest and most prominent disinformation guy in a speech yesterday on the subject at Stanford, but he is not the first.

The former Hillary Clinton 2016 presidential campaign manager Robby Mook and former Mitt Romney 2012 presidential campaign manager Matt Rhoades were the earliest examples of disinformation guys I personally came across. In 2017, Harvard’s Belfer Center launched the D3P, which stands not for the next exceptionally talented dual-threat quarterback or the latest hot new point guard, but for Defending Digital Democracy. Shortly after its inception, it announced that Mook and Rhoades would be brought on as “co-leaders of the initiative.” The project said its mission was to “identify and recommend strategies, tools, and technology to protect democratic processes and systems from cyber and information attacks.”

Saying that you’re fighting disinformation makes it look like you have coveted access to absolute epistemic truths.

More recently, after his very public break with the British monarchy, Prince Harry (now just Harry?) came out swinging hard as a disinformation guy. Last March, he was appointed to the Aspen Institute’s Commission on Information Disorder to help with a six-month study on American misinformation and disinformation. At the end of the sixth months, he found that things were not good, calling misinformation a “global humanitarian crisis.”

And of course, by the very nature of being the most clouted human being alive, after his speech at Stanford yesterday and accompanying preview of it in the paper of record, Obama is now the preeminent disinformation guy.

So what exactly does a disinformation guy do? A lot of things apparently.

For example: While Rhoades was supposed to be safeguarding truth and democracy in his position at Harvard’s D3P, he also ironically served as the CEO of Definers Public Affairs, a company that folded after it was accused of promoting anti-Semitic conspiracy theories on behalf of its client, Facebook. Even more ironically, Definers ran NTK Networks, a site that framed itself as a news outlet whose stories were actually being written by Definers employees, according to the New York Times. It used its sham new site to criticize Facebook’s rival client.

To the credit of the other disinformation guys, no one else so far has appeared to do anything else as nefarious and cartoonishly antithetical to stopping disinformation, though the tech companies that have played a key role in spreading it enjoyed an unscrutinized, relaxed time during Obama’s administration, as a notable number of his staffers flowed into Silicon Valley companies and vice versa.

So far, Obama’s contributions have been mostly anodyne but relatively thoughtful, albeit vague, proposals for how to address the problem, like increased transparency: “In a democracy, we can rightly expect companies to subject the design of their products and services to some level of scrutiny,” Obama said during his Stanford speech. “At minimum they should have to share bad information with researchers and regulators.”

Mook and Rhoades’ D3P is “not currently active,” according to its website, but when it was, it published a series of articles and policy recommendations. Some of these were more specific, but because they also focused on the most concretely definable problem of cybersecurity. Prince Harry et al. at the Aspen Institute published an 80-page report on disinformation in November, which called for “a better information environment” and “a stronger sense of community and trust in institutions” by taking action to “reinforce the integrity of our information ecosystem.”

So why are all of these guys recreating the meme where a car salesman slaps the roof of a car and says, “This bad boy can fit so much [x] in it,” with the “x” being A-list political icons and the “bad boy” being the disinformation knower circuit?

Some of it is because disinformation certainly is a problem, but the other bit of it is that there is a lot left to milk out of disinformation. There’s not a clear definition of what it means yet. Sometimes it’s easy (masks work). Sometimes it’s hard (Russia spreading information that is not incorrect). Sometimes it’s hard and easy (QAnon isn’t real, but Jeffrey Epstein was). It’s difficult to come up with specific solutions if you don’t even fully have a way to specify or agree on what exactly the issue is. We know it’s going to be an issue for a long time, but we’re not even fully sure what it is yet, let alone how to stop whatever it is.

Obama, Prince Harry, and Mook aren’t coming to it because they need a paycheck. They’re set—they don’t need to grift—but there is something attractive about tackling massive unknowns. The challenge is so great and ambiguous that no one will ever really know if you failed. It’s also possibly very fulfilling to the ego. Saying that you’re fighting disinformation makes it look like you have coveted access to absolute epistemic truths.