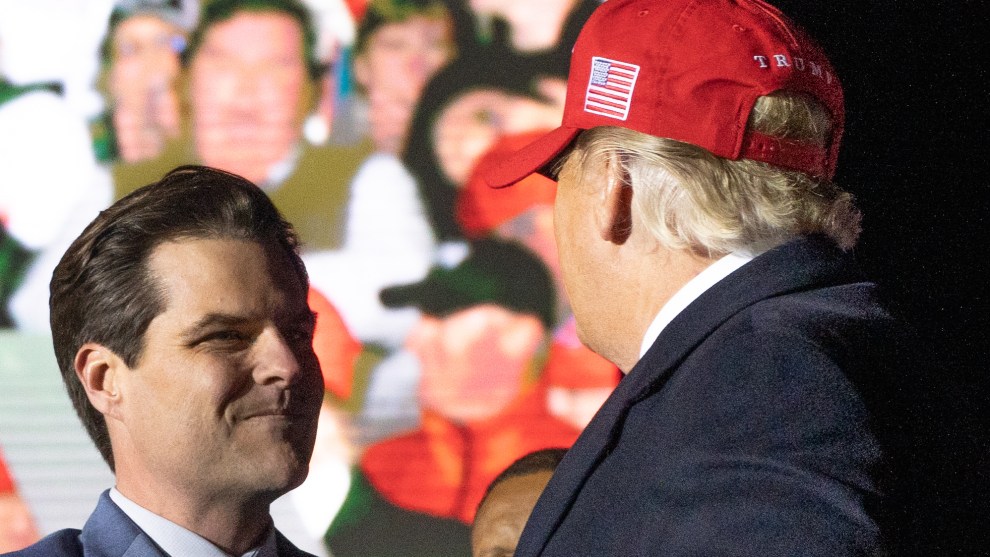 Rep. Matt Gaetz (R-Fla.) and one of the few obese people he seems to like. Megan Varner/Getty Images

On Thursday, the House passed a Democratic-sponsored bill to cap the price of insulin at $35 a month for most Americans, an effort to crack down on price-gouging by drug makers who have raised the price of a lifesaving product used by millions of Americans by almost 500 percent in recent years. Some people now pay more than $1,000 a month for insulin to treat diabetes, even with insurance. Democrats had been seeking a way to rein in drugs prices overall in a broader policy proposal, but it had little chance of passing the Senate. Hoping for bipartisan compromise, they siloed the insulin price control as its own measure. Still, only 12 House Republicans voted in favor of a bill that’s wildly popular with the American public.

Among those voting “no” was Rep. Matt Gaetz (R-Fla.), the GOP’s leading troll, who has come up with perhaps one of the most offensive justifications for GOP opposition to the popular bill. In his newsletter Friday, Gaetz told his constituents that he opposed the bill because fat people, not Big Pharma, are responsible for driving up the cost of insulin. He suggested that Type 2 diabetes, which is often linked to obesity, could be cured if only people would workout more and lose weight, at which point they wouldn’t need insulin anymore and the drug costs would fall without government intervention. Gaetz wrote:

While Democrat posturing of H.R. 6833 victimizes insulin payees as people with an uncontrollable disease that are being taken advantage of and need Big Brother to throw them a raft, lifestyle changes en masse would expeditiously lower demand and the subsequent prices of insulin. 90-95% of people with diabetes have type 2 diabetes, which “can be prevented or delayed with healthy lifestyle changes, such as losing weight, eating healthy food, and being active.” Arbitrary price controls are no substitute for individual weight control. Since 2000, the number of diabetes cases in the U.S. has nearly doubled. The demand for insulin has increased and the requisite price increase has followed suit. In other words, the price of insulin increases as waistlines increase.

More than a quarter of Florida residents are obese, including Gaetz’s favorite Palm Beach resident, former president Donald Trump. And more than 10 percent of the state’s population suffers from diabetes, not all of which is caused by lifestyle factors. Gaetz’s attempt to sympathize with them was probably not very convincing. “While I empathize with all Americans suffering from disease and will continue to fight Big Pharma, I voted against H.R. 6833,” he wrote. “I will not see a reemergence of FDR price controls and join the Democrats in their attempt to pave the Road to Serfdom.”

This isn’t the first time Gaetz has shown real scorn for overweight people. In January, on his podcast “Firebrand,” he decried Twitter’s banning of Rep. Marjorie Taylor Greene (R-Ga.) for “telling the truth” about the relationship between Covid and obesity. After a segment about his advocacy for medical marijuana, he warned that legal weed was “not an excuse for America to sit home fat and high.” He decried “woke” culture for “cheerleading for the chubbies.”

“I’m not here to fat shame anyone,” he said. “I’d have no room to talk. I know personally how challenging issues of weight can be. I’m frequently way behind in my own goals. But society has now gotten to the point where it’s considered verboten to consider that a daily salad might make you more resilient to all kinds of disease than the vax of the month pushed by Big Pharma. Where’s Michelle Obama when you need her?” He expressed nostalgia for the former First Lady’s “Let’s Move!” campaign and puzzled over how the country had gone from her push for a better diet to the current “obesity-embracing woketopia,” where people are accusing “the Body Mass Index of being a tool of white supremacy.”

Even his own colleagues are not immune from Gaetz’s obesity scorn. He once took a potshot at Rep. Jerry Nadler (D-NY), who has openly discussed his struggle with obesity and went through weight-loss surgery in August 2002, suggesting that Nadler should be put in charge of the “congressional weight loss program.”

While Gaetz may claim to empathize with people struggling with weight issues, he clearly doesn’t think he’s one of them. In August, he declared that he didn’t “fit in” with other members of Congress because most of them are old, obese people.

Matt Gaetz says today that the reason he doesn’t “fit in” well with other Members of Congress is because most of them are old and obese. pic.twitter.com/4k8MinxYUE