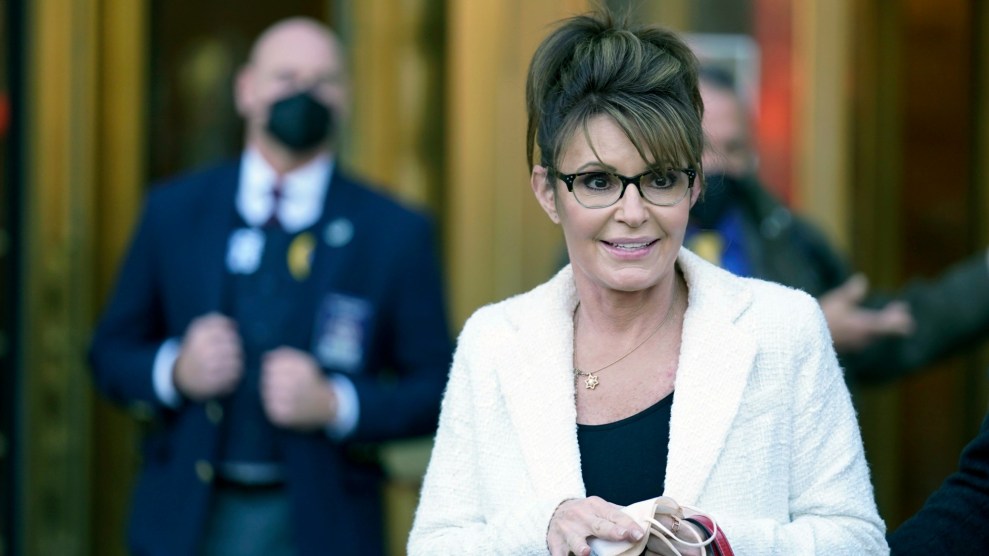 Sarah Palin made me laugh this morning.

I was looking at my inbox and spotted a fundraising email from her. The subject heading was, “Did you see my interview?” Had I missed something important? Then again, how important could a Palin interview be? Yes, she’s running for Congress to replace Republican stalwart Rep. Don Young, who died in office last month, having served 49 years in the House as Alaska’s at-large congressional representative. But she is just one of 48 candidates competing for his seat.

Regarding the question she posed, the email had a link to a segment she did with Fox News host Jesse Watters. I wondered what she might have said, so I clicked on it. But instead of being forwarded to a clip of the interview, in a classic bait-and-switch, I landed on a fundraising page for “Sarah for Alaska,” which notes she was endorsed by Donald Trump.

I returned to the email—which addressed me as “Patriot”—to see how Palin is pitching herself these days. This is what she said:

A lot of people are asking me why I decided to run. The simple answer is: I’m in it for the right reasons. I’ve got a public servant’s heart, and I’m willing to serve the American people.

I’ve been fighting for a better America my entire life, and I’m looking forward to proving why I am the best candidate, the only candidate, who can fight to put Alaska First every single day.

Can you see why I laughed? Sarah Palin has a “public servant’s heart”?

Let’s rewind the tape. In 2008, after a slapdash selection process that failed to identify her many liabilities, Arizona Sen. John McCain, the GOP presidential nominee, tapped this little-known Alaska governor to be his running mate. After a boffo speech at the Republican convention, she quickly became a political superstar. And just as quickly, the star faded. It turned out Palin couldn’t name a newspaper she read or intelligently discuss serious policy matters. The public didn’t know until later that she essentially had a breakdown while preparing for the vice-presidential debate.

With the McCain-Palin ticket flailing—while financial markets were collapsing—she mounted a vicious and vile campaign, accusing Barack Obama of “palling around” with terrorists and harboring a secret plan to impose totalitarian-style socialism on the nation. Her campaign rallies turned into ugly hatefests, with attendees decrying Obama as a traitor and calling for him to be killed. She essentially paved the way for Tea Party extremism and the animus-driven politics of Donald Trump

After losing the 2008 election—and, according to one study, costing McCain 2 million votes—Palin returned to her day job as chief executive of Alaska. Yet after only eight months, she abruptly quit mid-term, resigning on the Fourth of July weekend. In a rambling speech, she claimed she was doing so because she had decided not to seek reelection the following year, and it somehow wasn’t fair to the state if she continued as a lame-duck chief executive.

That didn’t make much sense, especially as she explained it: “As I thought about this announcement that I would not seek re-election. I thought about how much fun other governors have as lame ducks. They maybe travel around their state, travel to other states, maybe take their overseas international trade missions. I’m not going to put Alaskans through that. I promised efficiencies and effectiveness. That’s not how I’m wired. I’m not wired to operate under the same old politics as usual.” Should every governor—or officeholder—quit halfway through their tenure, if they cannot or will not be running for reelection?

In her remarks, Palin made it clear that she did not intend to leave politics completely. Invoking Gen. Douglas MacArthur, she commented, “He said, ‘We’re not retreating; we are advancing in another direction.'” (MacArthur didn’t say that; Maj. Gen. Oliver Prince Smith did.)

Palin’s surprise exit prompted speculation that she was bolting to prepare for a 2012 presidential campaign or to cash in on her celebrity—or both. Her conservative defenders in the punditry hailed this as a strategically clever decision that would afford her more running room for a White House bid.

One thing this move did not demonstrate was devotion to public service. That “public servant’s heart” certainly wasn’t beating in 2009. And Alaskans haven’t forgotten this. A recent NPR report found that one prominent reaction of state residents to Palin’s congressional bid has been that she’s a quitter. As Alaska Public Media reported this week:

In a survey about three years after Palin resigned from the governor’s office, Anchorage pollster Ivan Moore said, more than half of Alaskans had a negative view of her.

“We asked them why, and ‘quit,’ ‘quitter’—all the way down, every other comment was ‘quit’ or ‘quitter,'” Moore said.

Moore asked Alaskans again in October whether they have a positive or negative view of Palin.

“Her positive-negative came back at 31 positive, 56 negative. So that’s the immediate problem,” said Moore.

In a recent interview, Palin said, “I love to work, and anyone who is around me, they know. What I’m doing is applying for a job, for Alaskans, saying: ‘Hey, you guys would be my boss. Do you want to hire me? Because if you do, I’ll do a good job for you, and I won’t back down.’” Even though she quit the last time these “guys” hired her?

In her fundraising email, Palin asks, “Can I count on you to step up?” Coming from someone who ran away, that’s laughable.