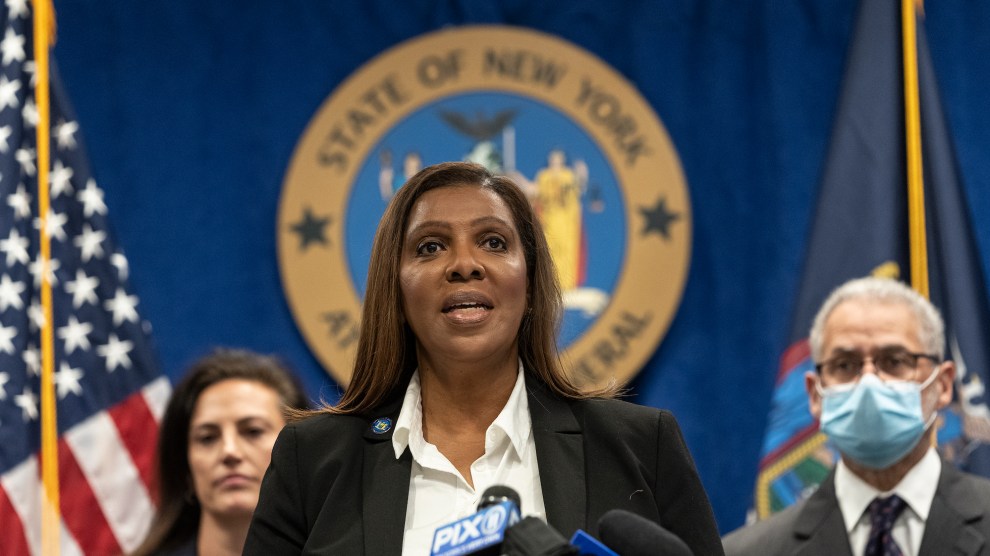 New York attorney general Letitia James’ civil fraud investigation into Donald Trump’s businesses is one of the few legal cases against the former president that has had real traction. On Friday, a federal judge ruled that the former president’s most serious attempt to stall it has no basis and the case can proceed. James has been investigating Trump’s finances since late 2019 and has recently focused on whether Trump had fraudulently manipulated the value of his business empire in the years before he became president to get favorable terms from banks, insurance agents, and tax assessors. Back in December, Trump sued James, asking New York district court judge Brenda Sannes to stop the AG’s investigation as a “fishing expedition” that amounted to political harassment because James is a Democrat.

But on Friday Sannes rejected Trump’s argument entirely, tossing out the suit, writing that she didn’t have the power to interfere with a state-level case, and that Trump’s claims of political persecution, which might justify her intervention, simply didn’t bear out. In her opinion, Sannes wrote:

“Plaintiffs have not established that Defendant commenced the New York proceeding to otherwise harass them. Such harassment is ‘typically’ done ‘through the unjustified and oppressive use of multiple prosecutions.’ Here, there is a single investigation and state court proceeding. While the New York proceeding has been ongoing since August 2020, Plaintiffs have submitted no evidence that the subpoena enforcement proceeding has been conducted in such a way as to constitute harassment.”

In his lawsuit, Trump’s attorneys listed numerous examples of times when James, who served on the New York City Council before being elected attorney general in 2018, has said critical things about Trump. They noted that in her campaign platform, James had said she would investigate him. As the judge overseeing the investigation has noted, the fact that James has simply said she disagrees politically with the former president doesn’t automatically make the investigation unfair. Sannes wrote that Trump “failed to produce any evidence that the state proceeding has been conducted in bad faith” and wrote that his claims of the investigation being a “baseless fishing expedition” are “wholly unsupported.”

A spokesperson for the Trump Organization did not respond to a request for comment, but James took to Twitter to call Trump’s now-dismissed lawsuit “frivolous.”

#BREAKING: In a big victory, a federal court has dismissed Donald Trump's baseless lawsuit to stop my office's investigation into his and the Trump Organization's financial dealings.

The federal court’s decision to toss his lawsuit is the latest in a string of legal defeats for Trump in this case. In December, James issued subpoenas demanding that he turn over written and phone records showing his level of involvement in creating the financial assessments that he submitted to various banks and insurance companies. She also subpoenaed the former president and his daughter Ivanka Trump to be interviewed by her investigators while under oath.

Trump’s resistance to both subpoenas led to his being personally held in contempt of court for refusing to turn over the requested records. Over the past few weeks, state court judges repeatedly defeated his attempts to avoid turning over the records and testifying, charging him $10,000 for each day he didn’t cooperate with the subpoena. Last week, Trump finally submitted the remaining records and paid James’ office $110,000 in contempt fines. This week, a state appellate court ruled that he and Ivanka must also appear for depositions with James.