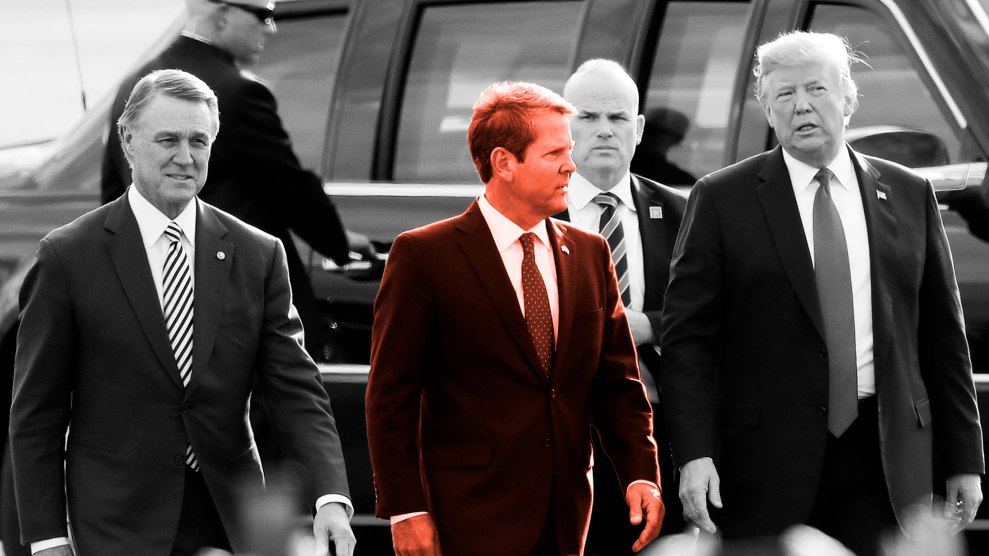 Brian Kemp, center, walks with then President Donald Trump, and his challenger, former senator David Perdue, at a rally in 2018.

In a rebuke of Donald Trump and his wild lies about the 2020 election, Georgia Gov. Brian Kemp crushed his challenger, David Perdue, in the state’s Republican gubernatorial primary. Kemp needed to secure more than 50 percent of the vote to avoid a June run-off. Numerous news outlets projected that the incumbent would easily clear that bar, and Perdue reportedly called him to concede. Kemp’s victory sets up a high-profile general election rematch with Democrat Stacey Abrams.

Trump seemed to view the Georgia primaries as an opportunity to mete out vengeance on Kemp, Secretary of State Brad Raffensperger, and other Republican officials who refused to go along with his desperate attempts to overturn the state’s presidential election results in 2020. Nowhere did the former president fight harder to topple a Republican incumbent than in Georgia. Trump reportedly convinced Perdue to run, held a rally to breathe life into his floundering campaign, and filmed and financed ads supporting him.

Perdue—a former senator who was unseated by Democrat Jon Ossoff early last year—centered his gubernatorial campaign on the 2020 election, joining a bus tour that featured election deniers like MyPillow CEO Mike Lindell; repeatedly attacking Kemp as a RINO (a Republican in Name Only); and attempting to blame Kemp for the fact that Joe Biden currently occupies the White House. But this proved to be a losing message, as the polls showed Kemp’s lead widening and widening.

To top off the humiliation, former Vice President Mike Pence—another person Trump has repeatedly blamed for the failure of his coup attempt—has publicly backed Kemp’s campaign while urging Republican voters to move on from the 2020 election.

Kemp may have resisted becoming an accessory to an illegal power grab, but it’s worth noting that he’s far from a moderate. A self-proclaimed “politically incorrect conservative,” he once ran ads in which he threatened to kidnap undocumented immigrants. Throughout this year’s campaign, he performed a careful tightrope walk, shying away from attacking Trump directly while stressing his own conservative credentials, like his decision to sign one of the strictest anti-abortion laws in the nation.

In an interview Monday, Kemp told reporters that he “had a great relationship with President Trump.”

“I’ve never said anything bad about him,” Kemp said. “I don’t plan on doing that. I’m not mad at him. I think he’s just mad at me. And that’s something that I can’t control.”

The defeat of Trump’s favored candidate in the Georgia gubernatorial race cuts a sharp contrast to the Ohio Senate primary, where Trump’s endorsement propelled venture capitalist JD Vance to victory. It may illustrate that Trump’s approval remains an asset among Republican voters, but not necessarily a golden ticket. Vance, after all, triumphed over a deeply divided GOP field, securing just 32 percent of the vote. That’s nearly identical to the 31 percent received by Mehmet Oz, the Trump-backed TV doctor who is narrowly leading in Pennsylvania’s hotly contested Republican Senate primary. Early returns from Georgia suggest that Perdue could win a smaller portion of the vote.

The far-right politics Trump represents still dominate the GOP, but it appears that the defeated president’s endorsement may only be powerful enough to persuade a minority of the party’s voters.