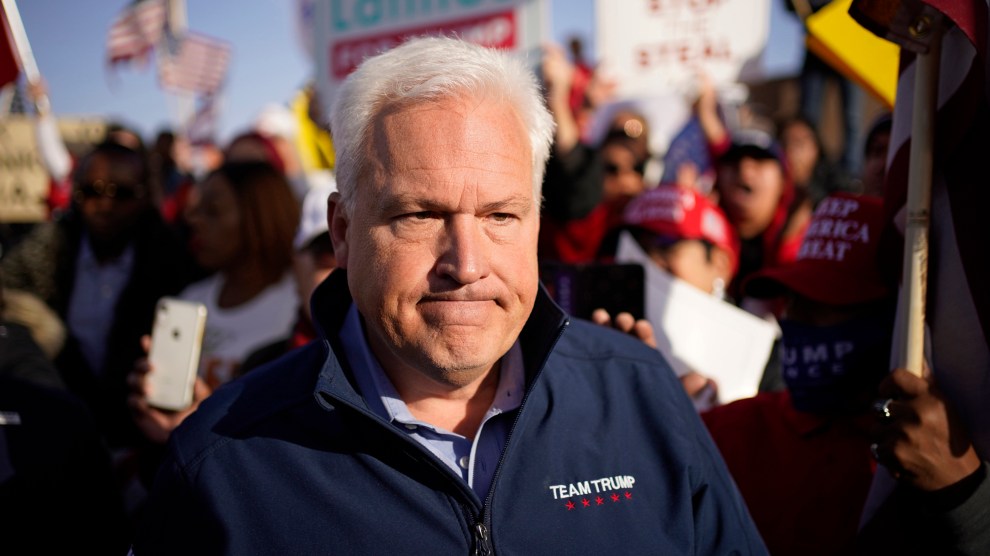 For years, hard-right politicians have flirted with the idea that non-white immigrants would supplant white Americans and use their newfound majority status for political and social gain. Conspiratorial versions concoct a “global elite” orchestrating a “white genocide”—an older idea, and cross-national one, tied to long held anti-Semitic suppositions. Last weekend, an 18-year-old gunman who subscribed to the this idea of replacement allegedly killed 10 Black people at a supermarket in Buffalo, New York.

That meant that this week, both abortion and the “Great Replacement” dominated headlines. And so, in an apparent attempt to jam every piece of prominent news into one burble of bigotry, CPAC head Matt Schlapp said that stopping abortion could also help those worried about replacement.

Apparently referring to the prospect of immigrants taking American jobs, Schlapp said, “If you say there is a population problem in a country, but you’re killing millions of your own people through legalized abortion every year, if that were to be reduced, some of that problem is solved.”

He continued, “You have millions of people who can take many of these jobs. How come no one brings that up? If you’re worried about this quote-unquote replacement, why don’t we start there? Start with allowing our own people to live.”

It’s a bit unclear what Schlapp means. Is he attempting to recruit, or convince, white supremacists whose main issue is replacement to take on the wider conservative goal of being anti-abortion? Or is he mad no one has connected the issues in this way? Is he critiquing “quote-unquote replacement” believers for not talking enough about the potential end of Roe?

As Adam Serwer wrote in the Atlantic, “sanitized” versions of the great replacement theory have become common from conservatives in the United States. We hear it often from our right-wing commentariat. They claim that Democrats are purposefully changing immigration law to “replace you, the American voter,” in the words of Fox News host Laura Ingraham. Throughout Europe, the theory is interwoven into the anti-immigrant sentiment prominent across many countries. (There’s a reason CPAC is in Hungary!) French writer Renaud Camus provides a famous example of the racist rhetoric with an intellectual spin. A gay man who marched in “homosexual component” of socialist uprisings in 1968, Camus legitimized the fear of replacement in his writings. He coined the phrase “Grand Remplacement” in a book in which he argued that Europe was being “reverse colonized.” (Supposedly, this was all because he was mortified upon seeing women in veils.)

Still, when Schlapp says “our own people,” he presumably means white people. There’s an obvious problem with his logic, beyond the fact that there are far fewer than a million abortions in the US each year: White people are not the only ones who get abortions. Abortion-related conspiracy theories work in the opposite direction, too, with some claiming that legal abortion is tantamount to Black genocide. But no matter which way you slice it, attempting to pitch abortion bans as a boon to engineering demographics is twisted.