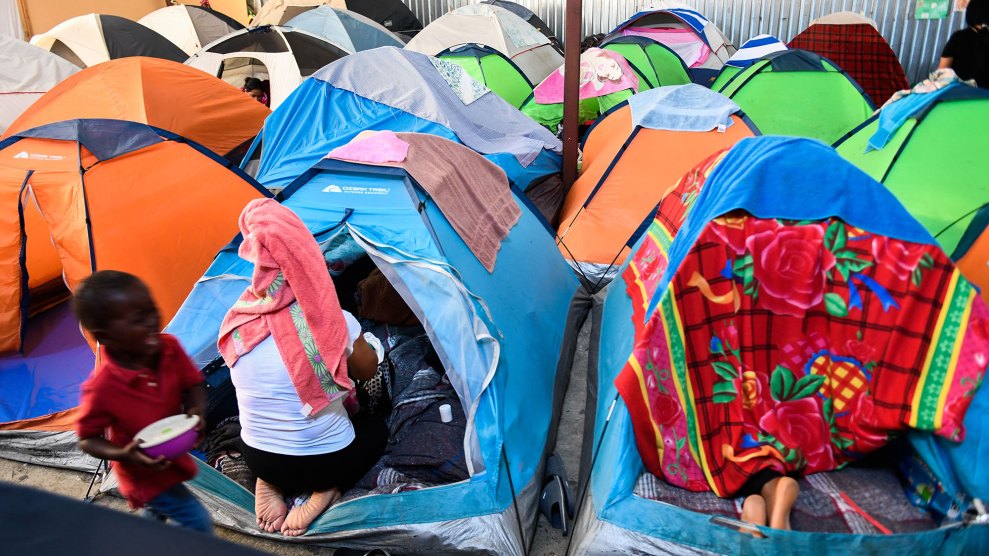 Republicans—and more than a few Democrats—have been lashing out at the Biden administration for planning to lift a Trump-era border closure policy known as Title 42. Critics from both parties have said a post–Title 42 border would be a “catastrophe” and that the administration shouldn’t end the policy until it is “completely ready” to execute orderly and humane processes at the border.

But the reality on the ground tells a somewhat different story. Local governments and non-governmental organizations in some major US border cities say they’re not only preparing to help more asylum seekers, they’ve been ready.

“We’ve seen this before; we’ve seen ups and downs no matter what administration is there.”

“This is not our first rodeo,” says Tucson Mayor Regina Romero, a Democrat and the first Latina mayor ever elected in the city. “We’ve seen this before; we’ve seen ups and downs no matter what administration is there.”

Their preparations are moving forward even as a federal judge is expected to rule—perhaps as soon as the end of the week—on whether Title 42 will actually end as scheduled. If the judge doesn’t intervene and the policy is lifted as planned on May 23, it would not constitute a new asylum policy; rather the shift would bring things back to pre-pandemic operations for asylum seekers at the border.

“We anxiously await and are eagerly preparing for the full termination of Title 42,” says Kate Clark, senior director of immigration services at Jewish Family Service of San Diego, a group that has been instrumental in assisting asylum seekers for years. “For too long, thousands of vulnerable families and individuals in desperate need of protection have been left with no relief or their ability to exercise their lawful right to seek asylum in the US.”

With the end of Title 42, there will inevitably be a significant increase in the number of people presenting at the border, as has been widely reported—but “we’re not going from zero to 100,” says Alex Mensing with Innovation Law Lab, an immigrant justice organization, because immigrant aid workers haven’t fully stopped assisting asylum seekers since there have been exemptions to the policy. “I would caution people not to assume that there will suddenly be an overwhelming rush at the border,” Mensing tells me. “It can be a lot more orderly.”

And here’s what’s key, he says: US border officials should process asylum seekers at the ports of entry—they have shown they have the capacity to process up to 1,000 Ukrainians daily at the San Diego port alone—because if they continue to turn people away and make it challenging to access official entry points, then more people will continue to cross in between ports, which would put a strain on Border Patrol resources, including holding facilities. This is a sentiment echoed by the Women’s Refugee Commission, Human Rights First, and the American Immigration Council.

Title 42 was first used in March 2020 when the Trump administration invoked this obscure health law to close the border to almost all migrants and asylum seekers as the pandemic raged on. The policy, as I’ve written, was used to quickly expel non-US citizens, without giving them proper asylum screening, even though seeking asylum is legal under US law and in line with international agreements. Title 42 was supposed to be a temporary measure to stop the spread of Covid, the Trump administration claimed, though as I’ve reported before, it was also a tool for Trump and his allies to stop migration. In the time since, Title 42 has contributed to the record high number of “encounters” by Border Patrol because many are trying to cross again shortly after being pushed back. Biden, much to the disappointment of immigrant and human rights groups that endorsed him in 2020, has not only continued using Title 42, even as pandemic restrictions eased inside the country, but his administration has also defended the policy in court, despite public health experts opposing Title 42, calling it xenophobic, cruel, and unlawful.

Romero says the White House gave her a heads up before the Centers for Disease Control and Prevention announced on April 1 that Title 42 could be lifted. The administration’s May 23 deadline gave them enough time to prepare for the number of asylum seekers to go up, Romero says. The city of Tucson has been working closely with Pima County, the Biden administration, Catholic Community Services, and other NGOs to cover the financial resources and logistics required to offer enough housing, food, transportation, and Covid tests and vaccines for asylum seekers, who will likely not know where they are or have much other support once they’re released.

Romero is specifically hoping to avoid what happened in her city a few years ago, when border agents released migrant families at parks or the Greyhound bus station in the middle of the night, with no support or guidance. “We also make sure that we’re coordinating with [Customs and Border Protection],” Romero says. “We want them to communicate with us” so that doesn’t happen again. Romero says she raised a red flag directly to the White House: “We are not going to accept that.”

In the San Diego area, the California Welcoming Task Force—which includes Jewish Family Service and Innovation Law Lab—has been in constant communication with the state and local governments, which have been “quite cooperative” in supporting asylum seekers after they enter the United States, Mensing says. Organizations such as Jewish Family Services are preparing to ramp up their assistance with public health screenings, transportation costs, overall logistics, shelter capacity, and legal guidance to make sure “no one stands alone in our community,” Clark says. Similarly, Catholic Charities in San Antonio Texas and Catholic Community Services in Tucson have been critical in offering migrant aid for families, especially during spikes in the last decade. And they say this time will be no exception.

While of course the best laid plans are still sometimes not enough, Romero believes there has been enough time to prepare for a humane and organized process at the border—but the narrative around this policy has been twisted. “Title 42 is not an immigration law, it is a public health tool that the previous administration politicized,” she says. “It’s been far too long and people have been seeing Title 42 as if it were an immigration tool.”

That was clear last month, after the Biden administration announced it would finally put an end to Title 42. Texas, Arizona, Missouri, and Louisiana sued to stop the administration from going forward with its plans. And cries of a migrant invasion and a border in crisis played non-stop on cable news. Some Republican officials and midterm candidates unsurprisingly used fear against Black and indigenous migrants for political points, yet didn’t see the thousands of Ukrainian asylum seekers at the border as a threat, or as putting an added strain on border resources. Many Democrats echoed this, including Arizona’s Democratic senators, who were part of the opposition to Biden’s plan, saying it was premature and that Arizona wasn’t ready.

As pushback grew from those in Congress who felt the Department of Homeland Security didn’t have an orderly plan in place, DHS Secretary Alejandro Mayorkas published a 20-page memo that outlines some of the department’s plans. In that memo, Mayorkas writes that while DHS is no longer “operationally engaged” in transportation, medical care, or shelter of those who are released from its custody, and that NGOs take care of that, the department’s goal is to “help communities alleviate the pressure they experience by expanding NGO capacity,” in part through Emergency Food and Shelter Program grants. Mayorkas also recently conceded that ending Title 42 will put an “extraordinary strain on our system,” but that “we are preparing for it.”

“It’s been far too long and people have been seeing Title 42 as if it were an immigration tool.”

Romero says this fits with what she’s seen so far. She says she has been clear with the Biden administration that the federal government must help compensate cities and NGOs along the border that are impacted by federal immigration policy; already, she knows there are FEMA funds to support expanding NGO capacity.

And as far as other resources go, Mensing says anyone in the administration who says they don’t have the capacity to process thousands of asylum seekers daily is “simply playing politics, because they do.” The DHS budget is upward of $50 billion, so “where there’s a will, there’s a way.”