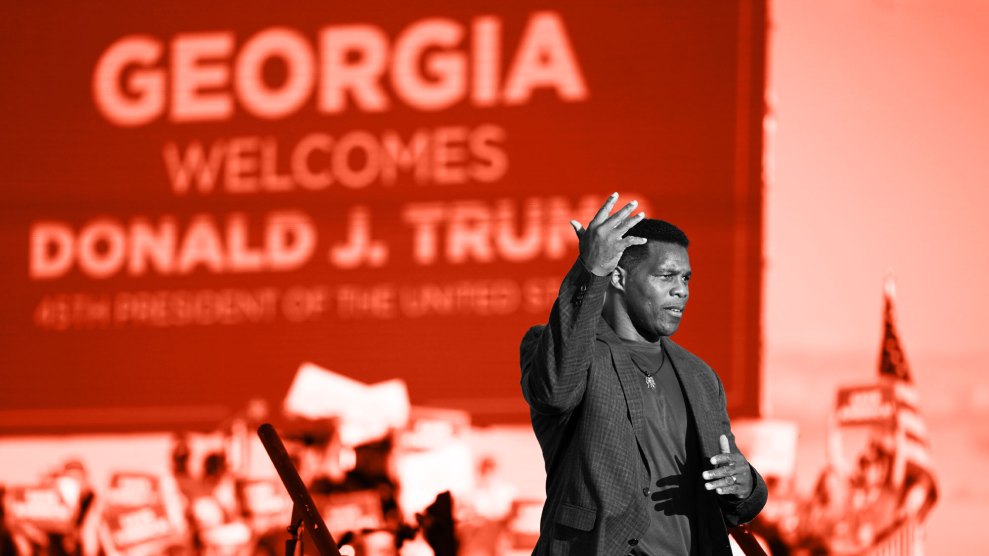 Herschel Walker, a former star running back whose actual political stances are ill-defined to nonexistent, has secured the primary nomination for Republican senator in Georgia, according to multiple outlets.

Walker is a divisive figure, even among conservatives. While former President Donald Trump and Senator Lindsey Graham (R-S.C.) encouraged him to run for office, Senate Minority Leader Mitch McConnell was once so concerned with Walker’s candidacy that he suggested that ousted Republican Sens. Kelly Loeffler and David Perdue look into running against him.

He used to have a habit of playing Russian roulette, which he considered “the ultimate game of competition.”

Three women have accused Walker of threatening behavior, including against his ex-wife, who said he repeatedly pointed a gun to her head. Walker says that he has dissociative identity disorder—he even wrote a book about it—and claims that blackouts from the disorder have prevented him from recalling incidents when he may have acted violently.

Still, Walker has admitted to his share of erratic behavior. He used to have a habit of playing Russian roulette, which he considered “the ultimate game of competition.” He told Howard Stern, “I love competition so much.” At the beginning of his memoir, he recounts an incident when he drove across town intending to shoot someone who had inconvenienced him, thinking about “the visceral enjoyment I’d get from seeing the small entry wound and the spray of brain tissue and blood—like a Fourth of July firework—exploding behind him.” A “Smile. Jesus loves you” bumper sticker caused him to change his mind.

Walker grew up in Georgia, but he lived in Texas for a decade before establishing residency in the Peach State in 2021. His sudden entry into politics is surprising, but his unwillingness or inability to articulate any political position at all is downright baffling. He hasn’t bothered to show up to a primary debate. The issues page of his website, which does not appear to be currently working, describes “putting Georgia and Georgians first” and promises to “stand for conservative family values” and provide “support for small businesses and American workers.” As the Washington Post reports, when asked on a podcast whether he would have voted for President Biden’s infrastructure bill, he said, “Until I can see all of the facts, you can’t answer the question.”

Here’s his take on John Lewis, who had his skull fractured by police as he marched for voting rights in 1965: “I think, then, to throw his name on a bill for voting rights, I think, is a shame. First of all, when you look at the bill, it doesn’t fit what John Lewis stood for, and I think that is sad for them to do this to him.”

Despite the controversies, Walker has coasted to victory in the primary, far outraising his opponents and garnering endorsements from Rep. Marjorie Taylor Greene (R-Ga.) and, eventually, McConnell. His status as a star running back for the University of Georgia was surely helpful. Walker won the Heisman Trophy in 1982. He is almost universally understood as one of the best college athletes of all time. As we saw with Alabama Senator Tommy Tuberville two years ago, college football fame can be a useful platform for political success. People already know your name. And, particularly in Walker’s case, they know you win.

Walker even gets a bit of a Trump bump from his playing days. Coming out of college, he famously spurned the National Football League to join the nascent United States Football League. There, he played for the New Jersey Generals, which Trump owned. (Here’s a whole documentary about how the former president wrecked the league, by the way.)

In the general election, Walker will face off against incumbent Democratic Sen. Raphael Warnock, who defeated Loeffler by two points in the 2021 runoff election. Given Democrats’ anticipated losses in the midterms, Warnock will have to put up a fight. Thankfully for Democrats, they have no shortage of Walker’s dirty laundry to air.