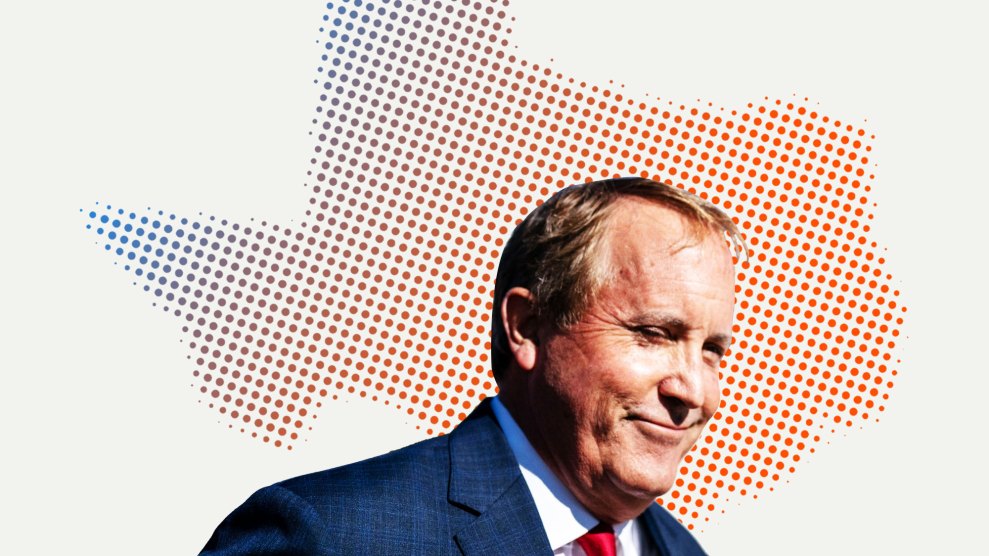 If you were to lay out in one place the Bush family’s contributions over the last half century, it would not be a particularly balanced ledger. In one column, you’d have PEPFAR; birth control; good reflexes; and one very succinct distillation of Donald Trump’s inaugural address. In the other: the never-ending War on Terror; two wars with Iraq; Iran-Contra; torture; war crimes; Clarence Thomas; Samuel Alito; same-sex marriage bans; tax cuts for rich people; illegal surveillance; global warming; the AIDS epidemic in the US; private equity; the Department of Homeland Security; air pollution; the Florida Recount; Terri Schiavo; “school choice”; the bungled Hurricane Katrina response; the savings and loan scandal; the Great Recession; Willie Horton; the War on Drugs; and the Texas Rangers’ baseball stadium.

So you do not have to shed any tears over George P. Bush—son of Jeb, nephew of Dubya, grandson of H.W.—face-planting in his bid to unseat Texas Attorney General Ken Paxton in Tuesday’s Republican primary runoff. In fact, it would be weird if you did. Bush, the state’s land commissioner, has coasted through his political career on the back of his family name, and he’s now come to at least a temporary stop, in part because of it. But as notable as it is that the Bush dynasty is over (for now), the most important story from the race is that Paxton’s own career isn’t. Paxton, who narrowly held on to his job in the 2018 Democratic wave, heads into the general election as a clear favorite against either Rochelle Garza or Joe Jaworski.

Paxton’s biography is a sort of amalgamation of all the kinds of things that tend to cost public officials their jobs. He has been under indictment since 2015 for alleged securities fraud. Much of his staff quit en masse in 2020 and accused him of abusing his office to help a campaign donor whose home had recently been raided by the FBI. He allegedly cheated on his wife with a state-senate staffer who went on to work for said donor. And he is a bad lawyer. His lawsuit attempting to overturn the results of the 2020 election was so error-strewn and poorly argued that the state bar is now suing his deputy over it. It was also so nakedly cynical that it earned Paxton an invite to the Ellipse on January 6th.

But rather than being run out of the party, Paxton has now found an enduring place in it, in part because of that same shamelessness that’s characterized his personal and professional dealings. State attorneys general are a huge nexus of power for a political project that has achieved many of its greatest successes by aggressively working the legal system. If your movement is going to be built around chipping away at individual rights and Democratic power via the courts, if it is going to turn every ballot or enacted law into a legal battle, then you need people like Paxton to keep churning out briefs. And he has done that, tossing pitch after pitch at the Supreme Court, waiting for them to take a swing. Sometimes the Supreme Court dismisses your Electoral College lawsuit. Sometimes it tells you you’re right about “Remain in Mexico.”

As I wrote earlier this year in a profile of Paxton for the magazine:

[Y]ou don’t need to be brilliant or ethical or charming to wield a lot of power in state government; you just need to keep the right people happy for long enough. And Paxton, for all his transgressions, has been a dependable vehicle for reactionary interests, inside and outside his state, for years. He’s led a legal crusade against immigrants, voting rights, environmental regulations, health care access, and trans equality. He’s scuttled local efforts to protect citizens from gun violence and COVID-19. And he’s taking an axe to Roe v. Wade.

Paxton’s persistence in the face of endless scandal makes him a model apparatchik for the current moment. He will never be president, but in a golden age of Republican corruption, in which anyone with ambition must bend the knee to an aspiring autocrat, a warm body with nothing to lose can do a lot of damage. By laundering the theories of conspiracists and hacks, he did as much as anyone short of Trump to make the Big Lie the new party orthodoxy. And in the process, he held a black light up to the rest of the conservative legal movement—the institutions and officials and donors who have turned jobs like his into some of the most powerful in state politics, and the compromises they’ve made to do it.

Bush, like several other Republican candidates, looked at Paxton’s record and somewhat reasonably concluded that someone should be able to beat this guy. But Trump’s years of stirring up conservative resentment at the FBI and the so-called “Deep State” has softened the landscape for scandal-plagued officeholders, and Paxton has embraced the “witch hunt” ethos. The work Paxton has done as AG—targeting trans kids; restricting abortion access; making life hell for migrants; and rallying a crowd just hours before some of its members stormed the Capitol—just aren’t deal-breakers right now.

George P. had the support of his uncle. But in the end, Paxton had the backing of the one ex-president the party still reveres.