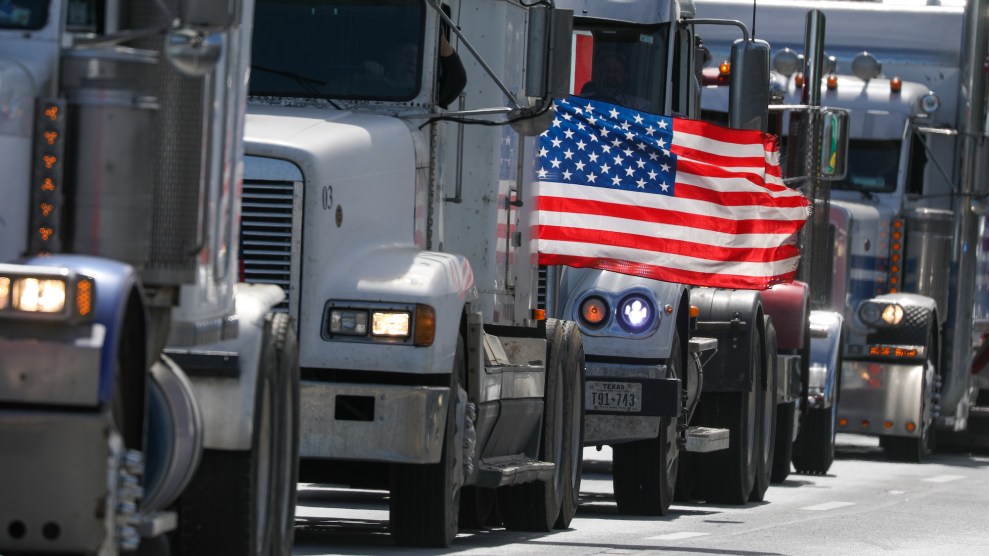 The People's Convoy block the roads to protest against country's COVID-19 restrictions and mandatory vaccination in Washington on March 16, 2022. Yasin Ozturk/Anadolu Agency/Getty Images

The trucker protest in the Washington, DC-area has finally come to an ignominious end after the manager of the Hagerstown Speedway, the group’s staging ground 90 miles outside of the nation’s capital, ousted the convoy . The rag-tag band of remaining truckers and their car-bound supporters who composed the People’s Convoy had returned this week for another round of protests in DC over, well, who really knows. But the Hagerstown, Maryland Herald-Mail reported Saturday:

Speedway General Manager Lisa Plessinger said she asked the group to leave because of infighting over what to do next among the 100 or so people remaining after the organization officially shut down Friday afternoon.

“I’m not a babysitter. I didn’t sign up for that,” Plessinger said, “so when they got to acting like a bunch of kids it was time for them to go home.

“Just like with any unruly child, you only put up with so many temper tantrums before you say, ‘Enough. Put them in time out.’ So that’s what I did.”

The remnants of the group vacated the facility peacefully by 10 p.m. Friday, she said.

The convoy, which tortured DC-area drivers trying to take their kids to soccer practice and what not by driving in circles around the Beltway for three weeks this spring, had raised nearly $2 million through a nonprofit foundation started by a convicted fraudster for its kitchen-sink protest against vaccine mandates, Black Lives Matter, government authority, and other conspiracy-theory based grievances. It attracted support from a few luminaries, such as Sen. Ted Cruz (R-Texas). But the convoy had been slowly disintegrating since returning to California after its first Beltway tour. Disputes were flaring among organizers, and the Washingtonian‘s Andrew Beaujon, who visited the truckers at the speedway Friday morning, reported that an actual fight had broken out the night before. The money to fund the protests also seems to have run out; according to the Washington Post, the foundation’s president recently said that it would stop working for the convoy protesters. The speedway manager, who’d allowed the truckers to use the grounds for nearly a month in March, finally had enough of the unfocused protesters.

“Initially they were just to be there one day, one night, and it just turned into…like when your mother-in-law comes to visit and decides to stay,” she told the Herald-Mail.