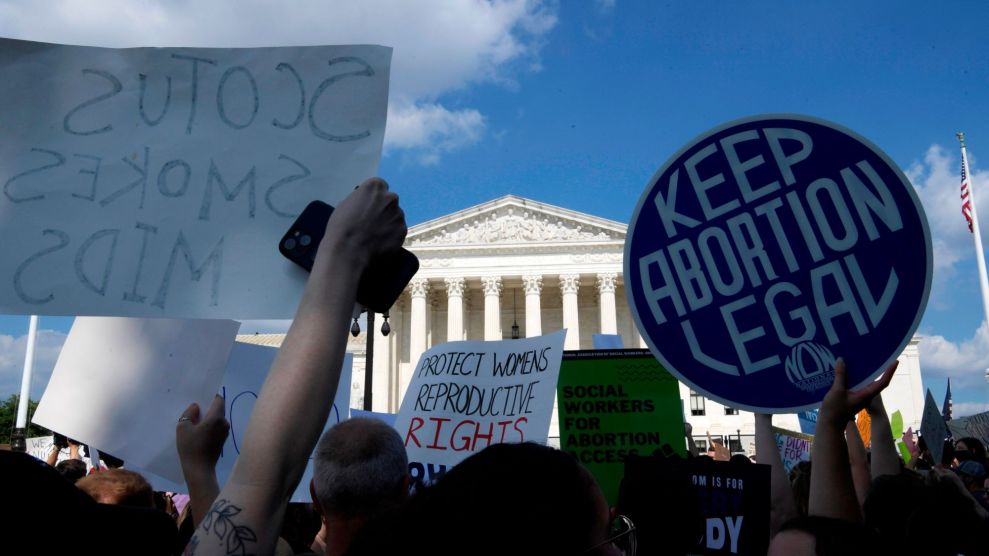 Protesters in front of the Supreme Court the day it overturned Roe.Lenin Nolly/EFE via Zuma

It was already clear seven months ago that the conservative supermajority on the court was gearing up to overturn Roe v. Wade, but that didn’t make Friday’s decision any less devastating.

After the reality sunk in, Mother Jones reporters snapped into action. We published no fewer than 15 stories on the decision yesterday, covering the devastating impact that the ruling will have, the Democrats’ impotent and infuriating response, and the Christian right’s long journey to victory.

Here’s a compilation of our coverage:

SCOTUS Finally Made It Official: Roe Is Dead by Becca Andrews and James West
The court officially ruled to let a Mississippi law stand that bans abortion after 15 weeks—overturning decades of precedent and threatening your constitutional rights.

Justice Clarence Thomas Just Said the Quiet Part Out Loud by Hannah Levintova
In a concurring opinion, he called on the Supreme Court to build on overturning Roe by reassessing rights to same-sex marriage and contraception.

“From the Very Moment of Fertilization, a Woman Has No Rights to Speak Of” by Inae Oh
The Supreme Court’s liberal justices write with sorrow and anger, for the “many millions of American women who have today lost a fundamental constitutional protection.”

I Helped Women in Texas Get Abortions Before Roe. I Can’t Believe I’m Still Having to Do the Same Scary Work by Kitty S., as told to Mary Tuma
An “abortion navigator” in Houston looks to the past and shares, in her own words, why we’re right to be outraged and afraid.

Roe v. Wade Was Killed by Minority Rule by Tim Murphy
The system worked, for the people who worked the system.

Mike Pence Calls for Abortion Bans Across the Country by Abigail Weinberg
This is bad.

After The End of Roe, These States Are Announcing They’ve Triggered Abortion Bans by Noah Y. Kim
Here’s where choice has already ended.

“Roe is on the Ballot,” Biden Says by Abby Vesoulis
President decries Supreme Court’s reversal of abortion rights and urges voters to act.

I Watched Them Celebrate by Becca Andrews
With the white men outside Nashville’s Planned Parenthood on the day Roe died.

It Was Always Going to be Alito by Stephanie Mencimer
“HARRIET MIERS, I AM SO, SO SORRY.”

Oklahoma Providers Have Already Been Living in a Post-Roe World. Here’s What We Can Learn From Them by Ruth Murai
In abortion care, says one provider, “you wake up every day to your fresh new hell.”

The Supreme Court is Waging a Full-Scale War on Modern Life by Pema Levy
The project that the conservative majority has undertaken is far more extreme than just going back to pre-Roe.

Is Roe Really on the Ballot? by Inae Oh
Empty instructions to vote—without backing candidates like Jessica Cisneros, in favor of singing “God Bless America”—don’t track with reality or Breyer’s dissent.

Clinics in States with Trigger Laws Are Already Shutting Down by Becca Andrews
It’s starting.

Can the FDA’s Approval of an Abortion Pill Stop States From Banning It? by Madison Pauly
Attorney General Merrick Garland seems to think so.