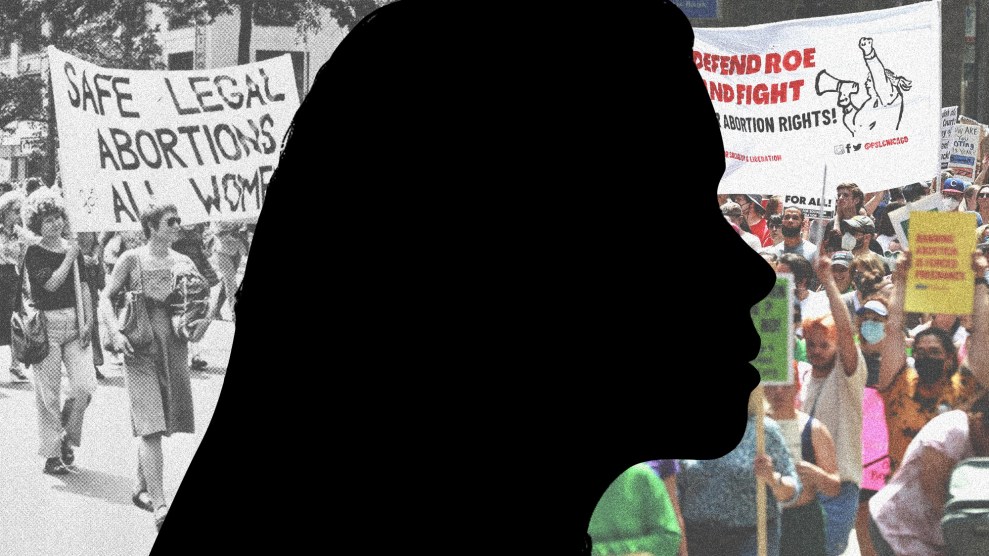 Prior to Roe v. Wade, the seminal 1973 US Supreme Court ruling that guaranteed abortion care as a constitutional right, Kitty S. served as an “abortion navigator” in Texas, helping people travel out of state to obtain the procedure. Today, she’s “shocked” that nearly 50 years later, she is doing the same—under Texas’ Senate Bill 8, which has banned abortions after six weeks since it took effect in September, and soon under a total ban now that the Supreme Court has overturned Roe.

Kitty has spent her entire career in reproductive rights, working at various abortion clinics in her state, including Women’s Reproductive Services in Houston, where today she works as an advocate and educator as the clinic has adapted to life under what was one of the country’s harshest abortion laws. We spoke in early June, following the leak of Justice Samuel Alito’s draft opinion outlining the downfall of Roe, and prior to today’s court’s ruling in Dobbs v. Jackson Women’s Health Organization. Below is her story, in her own words, condensed and edited for clarity.

“You had to go before a panel and argue that you needed an abortion or your life was in danger—it was mostly a committee of men forcing you to stay pregnant.”

When I was a college student at the University of Texas at Austin in the late ’60s and early ’70s, I volunteered with Planned Parenthood. During high school, I saw how my Catholic private school friends were taught sex was wrong and weren’t offered sex education or any information about abortion, and so many of my classmates ended up with unintended pregnancies and had their lives basically ruined. I realized this was avoidable and wanted to do what I could to educate and help inform other girls about things like birth control, sex ed, and abortion care.

Abortion was still illegal in Texas at the time; you had to go before a medical panel and argue that you needed an abortion or your life was in danger—it was mostly a committee of men denying you and forcing you to stay pregnant. Patients would come into the clinic and take a pregnancy test and see a doctor or nurse. If they didn’t want to continue their pregnancy, I would sit with them in our small counseling room and discuss their options. Some were terrified, others just wanted to get out of there, and some wanted to sit and talk things out for a while. I was there to help, listen, and connect them with an appointment if they wanted. We’d connect those women to an organization that would help them make arrangements to fly to states or cities where abortion was allowed, mostly to Los Angeles and New York. Over the course of college, I helped dozens of women travel to get abortion care.

It was scary for a lot of them: They would have to go alone, meet a stranger at the airport who would guide them to a clinic, and spend the night in a hotel in a different state. Imagine, back then you didn’t have the internet or cell phones. You couldn’t text a friend or anyone to let them know you were safe, so you’d have to make a long-distance call, which would be pricey. And you would have to hope that in that 48 hours, your boss, or ultra-Catholic mother, or abusive partner didn’t find out. And hope that you didn’t come back with an abortion-related infection.

The women I’d help were desperate—they were willing to go to a strange state, a strange city, and take this big risk so they wouldn’t have to continue their pregnancies. Some were already parents and were afraid that if they were forced to have another child they wouldn’t be the kind of mother they wanted to be, the best mother they could be, and knew they couldn’t do that if they had another child. At the time, abortion was heavily stigmatized; it was seen by many as a terrible thing, and there was a lot of fear from women that their families would disown them, that they could lose their reputation, that they would have to marry the man that got them pregnant, even if he was abusive.

“Imagine, back then you didn’t have the internet or cell phones. You couldn’t text a friend or anyone to let them know you were safe.”

And they had to find a way to pay for everything themselves. There wasn’t much financial help at the time, like we see today with abortion funds; it could get really expensive. During that era women weren’t even allowed to have a credit card in their own name, so coming up with money was a very big challenge for them. We’d often ask them, “Do you have anything you could hock or sell?” I remember the boyfriend of one woman went and sold his car so she could pay for the flight to L.A. There were many women who couldn’t afford the trip and they’d be sitting there in disbelief, in anger, in overwhelming sadness. It was heartbreaking.

Then in 1973, of course we all celebrated when abortion became legal. But we slowly saw that right eroded with things like the Hyde Amendment, which says you can’t use federal funds for abortion, and parental notification laws that force minors to get permission from their parents before they get an abortion. We kind of started to see the window close a bit. When I saw how they were starting to chip away at the rights guaranteed in Roe, I realized the fight was far from over and that I needed to keep going. And since Roe, the state of Texas added some ridiculous and stringent restrictions on abortion clinics and patients over time that, frankly, feel like targeted harassment, so I felt that my work here was not done. I was happy to stay in the field and fight; I love helping women of all ages and backgrounds with reproductive health care. It’s fulfilling and I’ve always liked the people I work with.

Now, I worry we’ll go back to more women dying from illegal or self-induced abortion or even suicide. Or there are those who will be forced to give birth, which is already risky, especially in Texas. where we have a high maternal mortality rate. I anticipate more women dying from pregnancy-related complications, too, like ectopic pregnancies. I also think we’ll probably see a rise in women staying in domestic violence situations. These are my biggest fears.

The fact that I am having to do some of the same things I did to help women go out of state for abortion that I did before Roe is completely mind-boggling. I am hearing a lot of the same desperation, and sadness, and anger as I did before Roe was decided. It’s unbelievable. It’s absolutely scary watching this happen all over again.

“How we got here mystifies me. I’m shocked that people haven’t learned from the past.”

And soon it’s going to get worse. The women who have the money and the resources and the connections are more likely to get care, but so many women don’t. For low-income women, those hurdles are insurmountable—as I saw very early on in my career. And these days, especially as more states pass [abortion bans], it’s going to be exorbitantly expensive to travel. I remember a woman who was 10 weeks pregnant and needed an abortion. She didn’t have the $295 for the procedure and had to sell some jewelry and other items to pay for it. By the time she had the money, she was 14 weeks pregnant and the cost of the abortion rose another $100 and she just couldn’t afford it. I suspect we’ll hear more stories like this one.

I can’t tell you how angry I am about our governor, lieutenant governor, and attorney general [who have all supported overturning Roe]. They are hypocrites—they are not adequately providing birth control and sex education, and so this situation is just going to get worse and worse.

I’m incredibly sad and angry that we are going backwards on abortion rights. How we got here mystifies me. I’m shocked that people haven’t learned from the past. What do they think, women are going to stop having sex? It’s amazing to me. We’re going to see so many lives ruined.