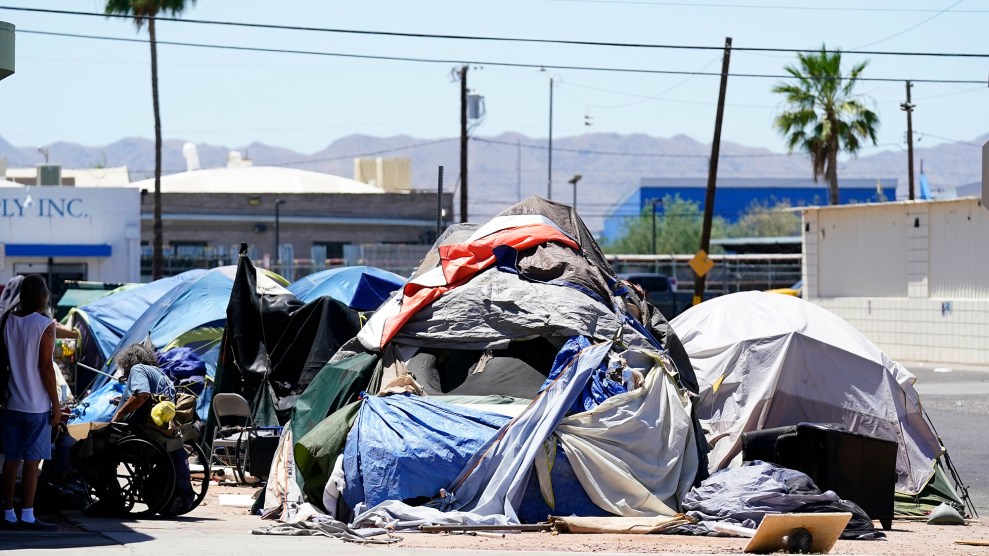 It was mid-afternoon when first responders found David Spell slumped and unresponsive under a bus shelter. The temperature outside was nearing 110F (43C)—the hottest day of the year so far in Phoenix, and 50-year-old Spell was disorientated, dizzy and dehydrated.

Spell had felt hot and weary during his shift at a car auction after driving an old Buick without air conditioning, but couldn’t take a break. After finishing work he bought three cans of spiked blue razz, an 8 percent alcopop, and sat on the bus shelter bench to drink under the partial shade. He remembers eating some canned mackerel and opening the third alcopop, and then nothing until being roused by the EMTs. He had passed out with heat exhaustion.

Spell, who describes himself as a functioning alcoholic, was taken to an air conditioned emergency homeless shelter to cool down. By nightfall, he was still lightheaded but cycled back to his usual resting spot—a quiet sheltered church doorway with cool air seeping out through the Perspex mailbox and an electric socket to charge his phone.

It was an uncomfortable night, with the temperature only dropping to 84F (29C), and no breeze or running water to cool down.

“It’s getting so hot, if I don’t keep cool and hydrated I will die out here,” said Spell, a self-taught mechanic and keen gamer originally from Buffalo, New York, who gets around on a trailer bike to transport spare parts, a mini ice chest and a plastic white pail that doubles as a seat and emergency toilet.

In this sweltering heat, keeping cool is the hardest thing for Spell and the rapidly rising unsheltered population in Phoenix—one of America’s fastest growing cities which has an extreme heat and affordable housing problem.

Since 2016, heat deaths have more than doubled in Maricopa county, which includes Phoenix, with unsheltered homeless people accounting for 40 percent of the death toll.

“We’re on the frontline of climate change and the housing crisis, but people aren’t connecting the dots,” said Patricia Soils from Arizona State University. “Exposure to extreme heat is a housing issue, and we’re the canary in the coal mine.”

Phoenix is accustomed to a hot desert climate, but the heat season has expanded and the number of perilously hot days and nights is rising due to global heating and unchecked urban development which has converted Arizona’s capital into a sprawling concrete heat island.

America’s fifth biggest city is the deadliest for heat fatalities with more than 650 heat deaths over the last two years.

According to the county’s annual count, 9,026 people were homeless on 24 January—3,997 sheltered in hostels or hotels and 5,029 on the streets, which is triple the number of unsheltered people compared to 2016. Heat related deaths are preventable, but being outside without adequate shade and water increases the risk of medical complications and deadly heat exposure.

As the extreme heat season gets underway, it’s hard to pinpoint exactly how many people are currently homeless but the crisis has visibly gotten worse over recent months as rents and eviction rates have soared.

At 4 a.m. one day last week, the Guardian accompanied an outreach team to the downtown zone where many of the city’s shelters and homeless services are concentrated, for their weekly count. Drugs like fentanyl and meth are common, so are gunshots.

It was a relatively cool 86F at 4 a.m. after a week of record-breaking highs, though likely much warmer on the ground where people slept.

An elderly white man with a bushy white beard and a history of mental illness screamed at the outreach staff, accusing them of stealing his money. A middle-aged Black lady with unkempt hair and three shopping bags containing clothes asked for help getting home to Dallas, Texas. “I’m tired of this place, it’s too hot,” she said.

This stretch of unshaded concrete and asphalt, known simply as the zone, is crammed with a hotchpotch of battered tents and makeshift shelters constructed with shopping carts, tarpaulin, crates, wooden pallets and old clothes. The encampment has doubled in size since the Guardian’s visit in February. A few burnt out tents have been abandoned.

It was relatively cool at 4 a.m. (86F) after a week of record-breaking highs, though undoubtedly much warmer on the ground where 96 people lay in rows without any shelter at all.

During the day, the sun is punishing and the heat radiating off the asphalt scorches the skin. There’s a handful of porta-potties and taps, but only one cold water spigot. City workers, NGOs and concerned residents hand out cold drinks and cooling blankets on very hot days when the temperature on the asphalt can hit 160F.

The weekly snapshot of the zone provides a glimpse into a much bigger crisis. There are men and women sleeping rough all over the city—in parks, near the rail tracks, on sidewalks, behind dumpsters, in parking lots and along the canals. None are included in the weekly count, nor are the people sleeping in cars or on sofas whom advocates believe are often self-evictors—people who left unaffordable apartments voluntarily after the Covid eviction moratorium and federal rental assistance ended.

Evictions are back to pre-pandemic levels with 4,000 to 5,000 a month so far this year as the affordable housing stock continues to shrink and the city’s 11 percent inflation rate is the highest in the country—in large because of house prices.

Only 12 percent of properties in the county had monthly rents under $1,000, vs 68 percent five years earlier.

“We were already at crisis levels, now it feels like we’re on fire,” said Marisol Saldivar, a spokesperson for the housing nonprofit St. Vincent de Paul. “This is a transplant town, but it doesn’t work out for everyone who comes looking for opportunities.”

For years, advocates have warned about a looming housing crisis but there’s been little joined up action and affordable housing is now almost impossible to find. The cost of an average home in Phoenix has almost doubled in the past six years

In 2021, only 6 percent of the housing stock in Maricopa county was valued under $200,000 compared to 38 percent five years earlier. The Phoenix housing market is overpriced by 56 percent, according to researchers at Florida Atlantic university, as the US housing market goes through another historic boom.

For renters, the situation is even more dire: In 2021, only 12 percent of properties had monthly rents under $1,000 compared to 68 percent five years earlier.

On the hottest day so far this year (114F), 69-year-old Clayton Hatfield watched a documentary on the second world war while recharging his fan at the Justa Center—an air conditioned space for older homeless people in the zone.

Hatfield has been living in a tent since arriving from Idaho six months ago for a job at a cousin’s glass company that didn’t pan out. His social security isn’t enough to cover rent; his ribs protrude through his scrawny frame and his health is failing. “Bad breaks and poor decisions, that’s why I’ve ended up here,” said Hatfield, who has asthma, COPD, and arthritis in both knees, and needs surgery on his left foot.

One in four of the city’s unsheltered population are over the age of 55, according to annual point-in-time count. In this heat, some seniors ride the bus all day to keep cool.

Nationwide, seniors are the fastest growing group in the homeless population, with many finding themselves on streets for the first time due to unaffordable rents, medical debts, job insecurity and family rifts. According to a 2019 study, the elderly homeless population could triple by 2030. “It’s a shock at my age, I’ve never experienced heat like this,” said Hatfield, who can just about manage walking to the convenience store for ice once a day.

Some seniors will ride the bus all day to stay cool: “It’s a shock at my age, I’ve never experienced heat like this.”

It’s hard for anyone to acclimatize to this heat, but for seniors on the streets it’s especially risky. “Too many people are aging into poverty, it makes me sick to my stomach,” said Wendy Johnson, director of the Justa Center.

Spell, who’s been sleeping in the church doorway on and off for 17 years, worries that he’s getting too old for the streets.

Every day is hard, but the summer is especially grueling. The Guardian shadowed Spell during the season’s first extreme heatwave, and saw firsthand how hard it is for unhoused people to survive.

Spell’s first stop is always his storage unit to pick up what he needs for the day, which takes more than an hour cycling over uneven roads and railway tracks. The morning after he passed out, it was 107F by the time he arrived. He was exhausted, and pretended to search for a lost item so that he could cool down for an hour without being asked to leave.

On days off, his go-to spot is then the midtown public library next to Hance Park, where cool air escapes through the floor to ceiling windows. The deep window ledge is partially shaded by sloping concrete slabs and a line of young oak trees. Police often patrol the park, so he never stays for too long.

In the afternoon, he goes to an air conditioned Taco Bell to recharge his phone and sip cold fountain sodas for as long as the staff let him. It’s a constant battle between keeping cool and staying out of trouble.

Spell is burnt out and recently applied for social housing. He qualifies, but waiting lists are long as the pool of landlords accepting people with housing vouchers has shrunk as there’s far more money to be made in the private sector. “I’m tired of the streets,” he said. “My body’s too old for this. I don’t want to drop dead out here.”