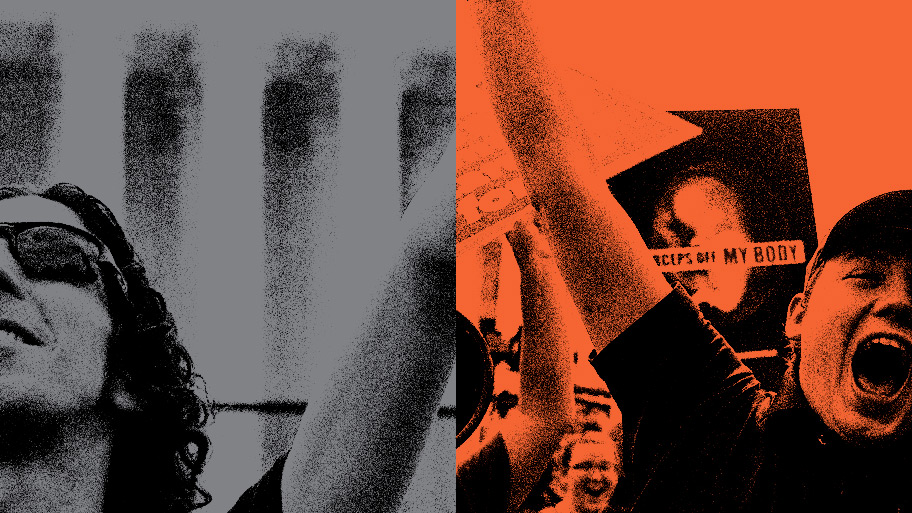 On the day that Roe officially died, a small cluster of white men were planted on the sidewalk outside the Planned Parenthood in Nashville, as usual. The clinic was closed, though a communications official there told Mother Jones that he could not immediately comment as to why.

Three of the men wore long-sleeved sun-protective blue shirts that featured an insignia of a pair of baby’s feet with a heart in between. “MISSIONARY TO THE PRE-BORN,” the white lettering said. “SCOTT HORD MINISTRIES.” Honks punctuated the noise of the road with regularity, usually from big delivery trucks, celebrating the Supreme Court’s decision to overturn the right to abortion. One man drove by, right hand on the wheel, his upper body hanging out of the open window of his truck. “Roe versus Wade!” he crowed, honking. The men on the sidewalk waved and cheered in response.

Tennessee currently has six abortion clinics, all of which will have to stop providing abortions soon. The state has on the books a “trigger law” that bans abortions within 30 days, though the Tennessean reported Friday that state officials are working to put it into effect sooner than that.

At around 10:15 a.m., a woman who did not speak English well drove up to the clinic, unaware that it was closed. Scott Hord, the leader of the crew, told me that once he realized there was a language barrier, he called a translator that works for his ministry. He connected the woman and the translator on the phone, and said that consequently, he didn’t know the details of the conversation, but he did know “it led to her realizing the truth, the reality of what does happen here and what they do, and so she left, and we will support her through the journey.”

Hord, who has been doing anti-abortion work for seven years, told me he “rejoices” in the Supreme Court decision, but he is emphatic: “It’s really just the beginning, and it doesn’t mean the fight will end here.”

A well-known leader in the so-called “pro-life” movement, Hord travels frequently to share his strategies with other like-minded activists. Now, he expects a great deal of his work will be concentrated in states that are planning to protect abortion access. “It’s going to be hard, because the other side hates what we do,” he said. “They’re going to put laws in place to try to keep me from having my constitutional right to stand here in the public, to engage people.”

Another battlefront—or “something that the culture is not addressing,” as he said—is exceptions in abortion bans around rape. He defines this act as “the forcing of one’s will against another to bring harm,” and Hord drew a parallel between that and abortion. “What is abortion? Unfortunately, it’s the forcing of one’s will against another, not to bring harm, to bring death.” (I don’t mean to make this personal, but I must admit that as someone who has been assaulted, as someone who knows and loves so many women who have had similar and much, much worse experiences, I had to set my jaw against my own nausea at this point in the conversation.)

While Hord was adamant that rape is horrific and deserving of severe punishment, he spoke of women he said he has “walked with” who gave birth and fell in love with their children.

Certainly, that is possible. But humans are complex, and not every person’s story would or could ever reach that conclusion. That’s why today’s decision from the Supreme Court is so devastating. And as I saw on this one sidewalk, the complexity and the pain and the circumstances of what it means to be human, and the inequalities therein, have been shoved aside in favor of ideology.