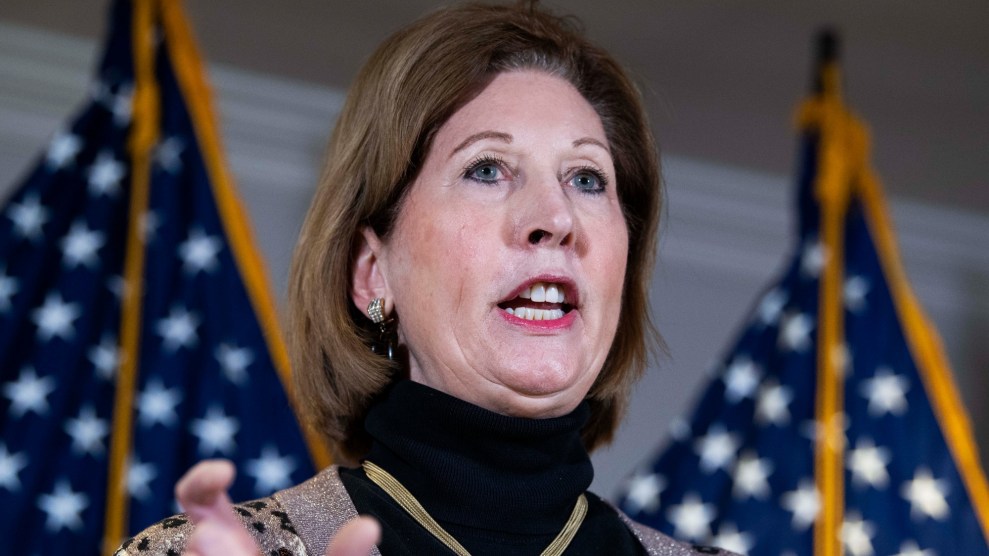 The US Justice Department on Wednesday questioned payments to high-profile January 6 defendants from a nonprofit run by Sidney Powell, the infamous “Kraken” lawyer who helped promote Donald Trump’s lies about the 2020 election. The DOJ asked if those payments create a conflict of interest.

In a motion filed on Wednesday, federal prosecutors cited reporting by Mother Jones as well as from Buzzfeed that Powell’s organization, Defending the Republic, has funded legal defenses for at least four Oath Keepers facing charges related to the January 6 attack on Congress. That includes the group’s founder Stewart Rhodes, and Florida Oath Keepers Kelly Meggs and Kenneth Harrelson, who face seditious conspiracy charges, as well as Meggs’ wife, Connie Meggs, who faces other conspiracy charges.

“Defending the Republic may have interests that diverge from these defendants,” prosecutors said in a June 16 letter to defense lawyers in the case.

Powell’s group also agreed to pay for the defense of one member of the violent far-right group Proud Boys, Zachery Rehl, according to John Moseley, who previously served as Rehl’s lawyer. It’s not clear, however, if the organization ever made payments for Rehl’s defense, and DOJ did not mention him Wednesday. Powell and another lawyer who works with Defending the Republic did not respond to inquires from Mother Jones.

Prosecutors say in their motion that they want to ensure that lawyers receiving payments from the group are not violating local conflict of interest rules, which require that defendants are informed of any payments to their attorneys by outside parties. The rules also say lawyers must make sure such payments do not cause “interference with the lawyer’s independence of professional judgment or with the client-lawyer relationship.”

Powell famously helped concoct and disseminate phony conspiracy theories asserting that election fraud caused Trump’s 2020 defeat. By promoting those bogus claims, she raised more than $14 million from Trump supporters. She is now using some of that money to fund January 6 defenses, according to lawyers involved in the cases, even as she herself faces scrutiny from the House committee investigating January 6, and reportedly from a federal prosecutors in Washington. She also faces potential disbarment for filing baseless lawsuits aimed at overturning Biden’s win in swing states.

I reported last month that Powell, given her involvement in January 6, may have interests at odds with those of clients whose defense she is funding.

It’s not illegal for Powell’s organization to pay defendants’ legal bills. Moseley said he did not receive instructions from Defending the Republic on how to defend Meggs. But he said that the group’s financial support has the effect of making plea bargains less likely. In part, he said, that’s because defendants often plead guilty when they feel they are “out of options” and can’t afford to keep paying lawyers. But Moseley also said that Powell’s group seeks out aggressive attorneys who, in practice, may be less likely to negotiate deals with prosecutors. The group seeks “people who are fighters,” he said.

In their June 16 letter, prosecutors cited Moseley’s statement that Powell’s payments could discourage plea deals. “This fact could be against the interest of a particular defendant,” they said in a footnote.

Prosecutors also cited a 1981 Supreme Court ruling in a case where a third-party paying legal bills for criminal defendants was the “operator of the alleged criminal enterprise.” That gave the defense lawyer “an interest in the clients not testifying against the third-party payer or taking other actions contrary to the payer’s interest.”

In their letter, prosecutors asked lawyers for defendants in the Oath Keepers seditious conspiracy case if they were receiving payments from Defending the Republic. Several said they were not. Rhodes’ lawyers did not respond to the DOJ. Lawyers for Kelly and Connie Meggs and for Harrelson declined to say if Powell’s group was paying their fees, but told the DOJ they were complying with conflict rules.

William Shipley, a lawyer for Oath Keeper Roberto Minuta, who is also charged with sedition, and who reports have not identified as receiving money from Defending the Republic, declined to say if the group is paying his fees, the government said. “Should Judge [Amit] Mehta wish for my client or me to explain the arrangement for funding my client’s legal defense in order to confirm that my client’s Sixth Amendment right to conflict free counsel are being afforded—or waived—we will provide him with whatever information he requests,” Shipley wrote. Shipley did not respond to inquiries from Mother Jones Wednesday.

Bradford Geyer, who represents Harrelson, told me he would only disclose an outside source of funds if the presiding judge “wants me to.” Geyer also said he took exception to the suggestion he lacks independence: “The idea anybody could influence me to do something that was contrary to the interest of my clients—there may be there is people out there that do that—but I could never do that,” he said. “I’m all they have.”